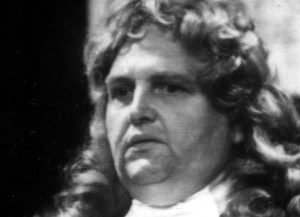 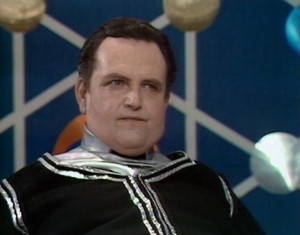 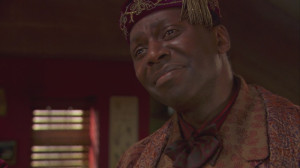 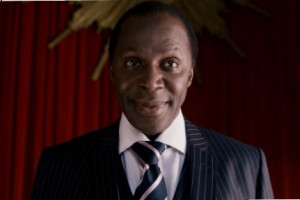 25 April 1964: broadcast of "The Screaming Jungle", third episode of the story we now call The Keys of Marinus. The second Key is hidden in a jungle full of mobile carnivorous plants. 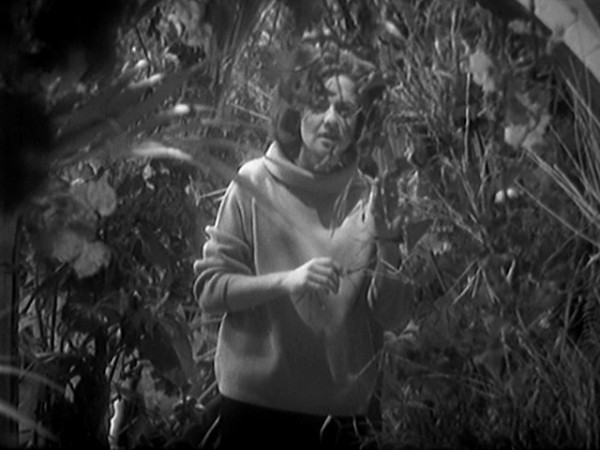 25 April 1970: broadcast of sixth episode of The Ambassadors of Death. The Doctor finds that the aliens are keeping the original astronauts hostage, but is kidnapped by Carrington on his return. 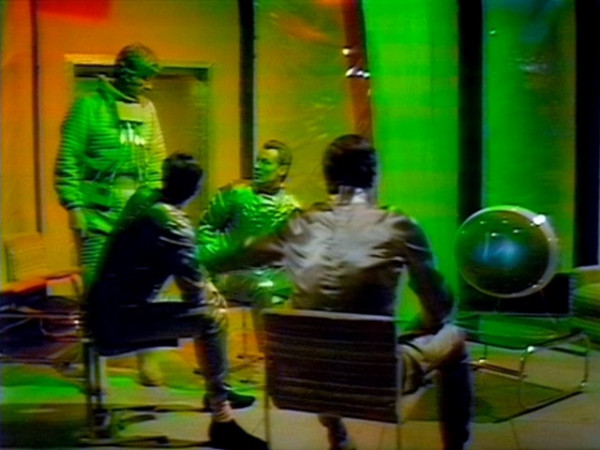 I was looking at my grandmother’s memoirs the other day and came across this interesting passage:

Like so many Americans, I know much more about my mother's family than about my father's, and she in turn knew more about her own mother's family. Her mother was Frances Wyatt Belt, whose father was a homeopathic doctor practicing, I think, but I am not sure, in Philadelphia. Her mother was Rebecca Heath Bordley, the daughter of Matthias Bordley. The Bordleys of Wye Island are about the most distinguished of my ancestors; there was a Judge Bordley who sent his sons all the way to Eton before the Revolution - the poor boys went knowing that they could not come home for eight years, and one of them died there, but one my great, great grandfather survived. There is a painting in the style of Zoffany of the two Bordley boys on Archer's Day at Eton, in fancy dress. I have a photograph of it, but the original is owned by my second cousin, Gordon McGrath. For a long time the picture hung in the Hadfield house in Carlton House Terrace, and I was told more than once that it would be left to me, but it was left instead to Gordon's father, Sims McGrath. So it went back to America, and perhaps it is happier there and more valued. And I have the photograph, and also one of "Aunt Gibson" - my grandmother's great-Aunt with whom she spent a great deal of time before her early marriage – my grandmother’s marriage, I mean. I mean I have a photograph of a painting of her by Gilbert Stuart. She and Nellie Custis, the step-daughter of George Washington, were great friends and the story is that the two girls had their portraits painted at the same time for each other.

In these online days, it was the work of seconds to find both of these paintings. Here are the two boys dressed up as archers (I have no idea if "Archers' Day" is a real Etonian tradition). 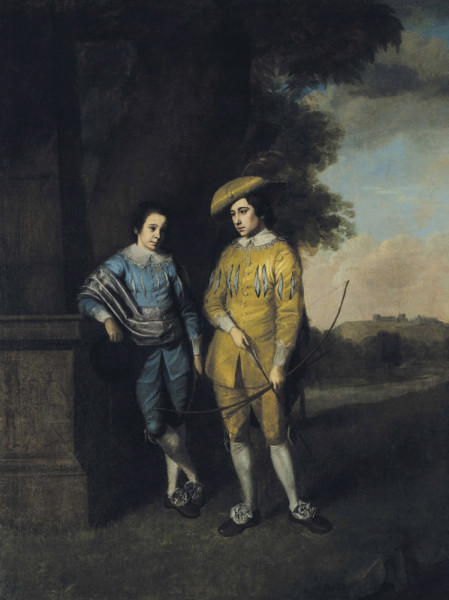 It was sold for $47,500 at Christie’s in 2018. According to Christie’s, the painting had passed from the artist to “Aunt Gibson” (Elizabeth Bordley Gibson, 1777-1863), then to her great-niece, Elizabeth Bordley Belt McGrath (1842-1926), then to her niece Lady Frances Hadfield (1862-1950), my grandmother’s aunt and unofficial guardian. Not that it maters much, but Christie’s thinks it then passed not to Sims McGrath senior (1877-1959) or to his son Gordon (1920-1990), but to Gordon’s brother Sims McGrath jr (1918-1998), and in 1988 from him to their sister Peggy, who was married to David Rockefeller. She died in 1996; the 2018 Christie’s auction was of paintings from her and her husband's collection. The buyer has not been disclosed. (In parenthesis, I do not completely buy my grandmother's story that the painting should have been left to her; I don't really think she would have known what to do with it. Lady Hadfield was scatty but sharp.)

The painting is by Charles Willson Peale, who got a lot of work from the Bordley family (and is a better known artist these days than Zoffany, who my grandmother accuses him of imitating). Another portrait of the two boys by Peale, at a younger age, is in the Smithsonian but not on display. 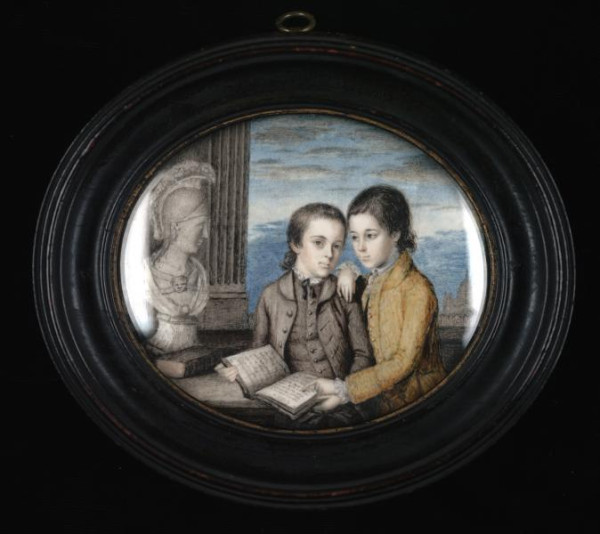 I am descended from the younger boy, Matthias Bordley (1757-1828), my 4xgreat-grandfather; the older brother, Thomas, died aged 16 in 1771. It's interesting that in both pictures Thomas is on the right, eyeing his younger brother a bit moodily. In the earlier picture, Matthias is looking straight at the viewer, ignoring the book that his brother is trying to show him; in the later one, he is looking at his brother with a bit of a grin. He went on to marry and have thirteen children.

The portrait of their (much) younger half-sister Elizabeth by Gilbert Stuart, best known for his classic portrayals of George Washington (to be found on everyday objects such as dollar bills), is on display at the Pennsylvania Academy of the Fine Arts in Philadelphia. 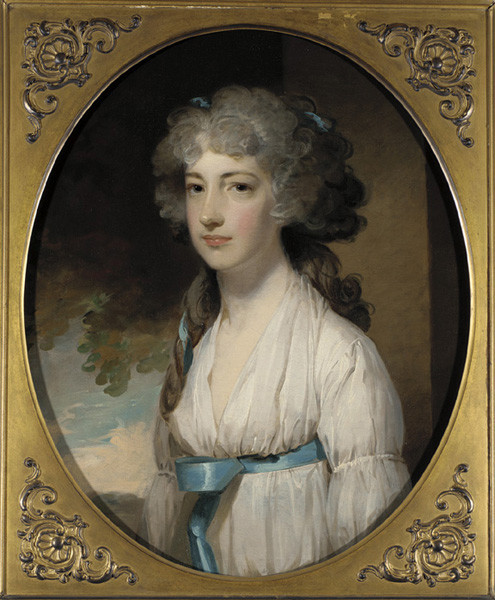 Stuart is best known, as I said, for his older men, but his young women seem to me to have more character on the whole, and that's certainly true of Elizabeth Bordley. She looks like she is about to make a cuttingly sarcastic remark, or at least that is what she is thinking of. The picture is dated to around 1797, the year she turned 20. (She was born to her father's second wife, after his first wife and son Thomas had both died.)

Nellie Custis (1779-1854) was George Washington's step-granddaughter, not step-daughter as my grandmother would have it, and married George Washington's nephew. She and her brother were brought up by the Washingtons after her father's early death. (Their mother remarried, and had sixteen children by her second husband.) The best known portrait of her is indeed also by Gilbert Stuart, but it dates from 1804, a few years after his portrait of Elizabeth. Nellie is 25 and married with at least two children; she's sitting down and thinking, glad of the chance to pause from the domestic fray. The portrait is in the National Gallery of Art, but not on display. 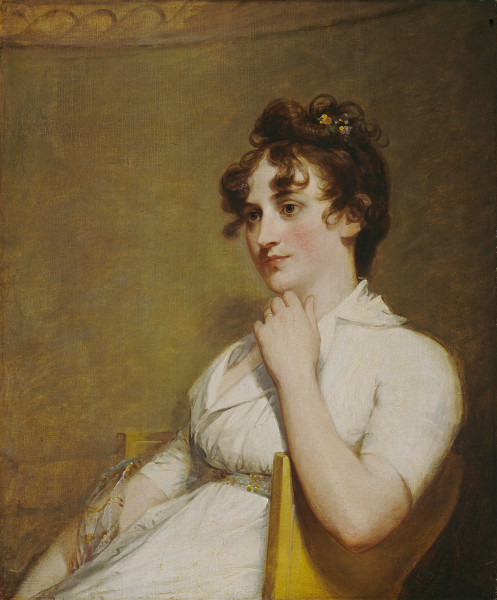 Given the gap of seven years between the two portraits, I don't think my grandmother's story that they were commissioned as tokens of mutual admiration can be true; but Nellie Custis and Elizabeth Bordley were indeed great friends, and Nellie's letters to Elizabeth have been published.

Going back to Elizabeth, there are two other striking portraits of her from later in her life. This by Thomas Sully (on display in the Nelson-Atkins museum in Kansas City, MO, but owned by the Thomas H. and Diane DeMell Jacobsen PhD Foundation of St Louis) dates from 1820 or 1821, a few years after her marriage in 1817 to Philadelphia doctor James Gibson. They had no children. She kept herself pretty busy by writing family history (her work is dated 1826, though not published until 1865) and presumably also by corresponding with Nellie and other friends. Here the angles of her face have been softened by middle age, which otherwise does not seem to have hit her too hard. She looks somewhat wistful. A first marriage at forty is relatively late now, and even more so in those days. She had spent many years looking after her mother, who died in 1816. What other options had she not taken, or not been able to take? But she and her husband were to have almost four decades together.

He died in 1856; she lived until 1863, and in 1861 John Henry Brown caught this striking image of her (he was noted for the almost photographic quality of his work, and you can see why, though she doesn't look anywhere near 84 years old). The original is in the Maryland Center for History and Culture, and is surely in colour, but I could not find a picture of it; this monochrome image is from the Smithsonian catalogue of American Portraits. 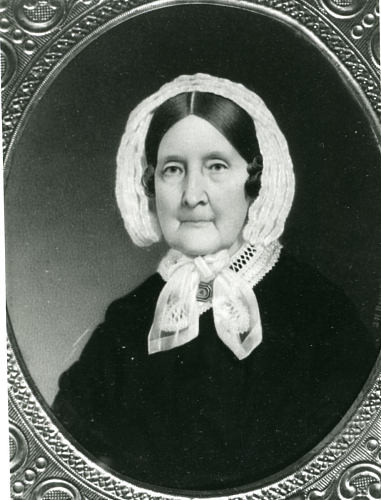 She still has the same long nose as in the earlier pictures, and I think that she is planning the next cutting remark for anyone who deserves it, just as she was when sitting for Gilbert Stuart 64 years earlier, and perhaps a bit impatient with the hassle of being painted yet again; I can imagine her telling her recently married great-niece Fanny, my grandmother’s grandmother, that she is too far old for all that stuff and nonsense. But I'm glad that they caught her, again, for posterity.
Collapse