5 April 1999: death of John Wiles, innovative producer who succeeded Verity Lambert but did not last long in 1965-66.

5 April 1969: broadcast of fifth episode of The Space Pirates. The Doctor and friends find they have been imprisoned with the terrified Dom Issigri; Clancey and Dom escape, but the Doctor, looking for Jamie and Zoe, is caught in the take-off blast. 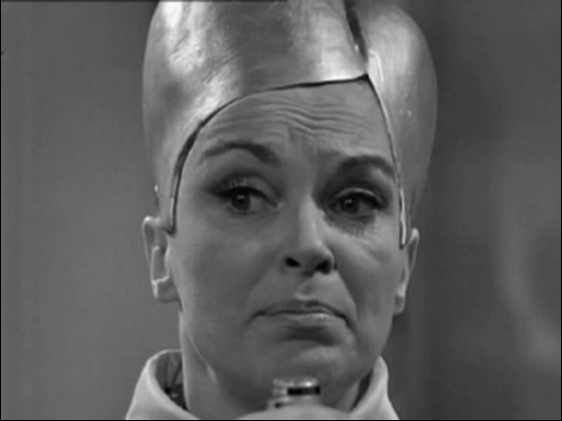 5 April 1975: broadcast of fifth episode of Genesis of the Daleks. The Doctor almost gets Davros to destroy the Daleks; Gharman leads a revolt against Davros; the Doctor prepares to blow up the incubation tanks. 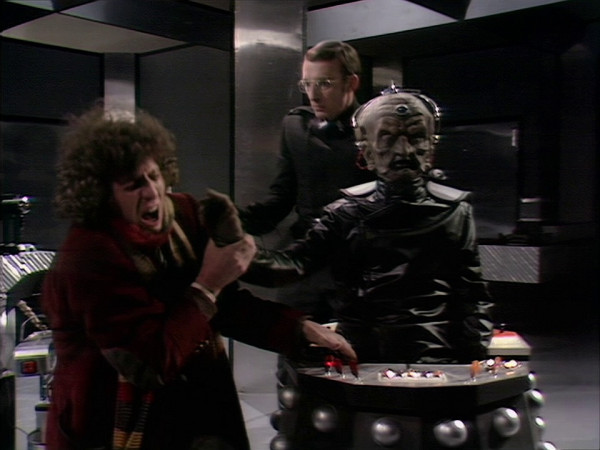 5 April 2002: webcast of "No Child of Earth", part 2, the sixth episode of Death Comes to Time. (Am not going to bother with screenshots from this in future, they don't really tell us anything.)

5 April 2008: broadcast of Partners in Crime, first episode of Season Four of New Who; first regular appearance of Catherine Tate as Donna Noble. The Doctor and Donna foil a plan to turn large numbers of people into food for the infant Adipose. 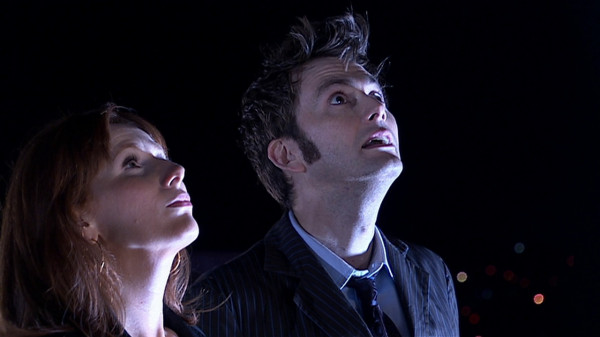 5 April 2010: broadcast of Aeolian, thirteenth episode of the Australian K9 series. London is being bombarded by sound-waves that cause mass panic. K9 and Starkey are on the trail of an alien, the last of the Aeolians. Darius tries to rescue Jorjie, trapped by falling debris. Drake believes Gryffen has caused the catastrophe and sets out to destroy the creature. 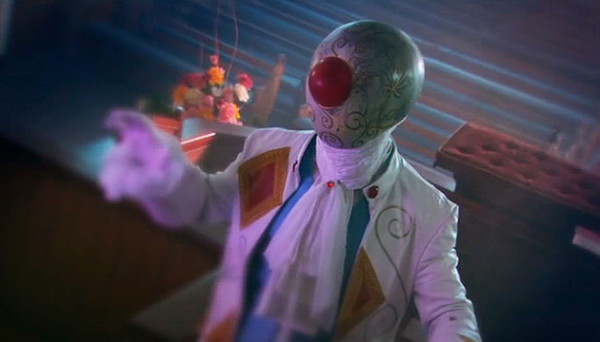 This is the latest post in a series I started in late 2019, anticipating the twentieth anniversary of my bookblogging which will fall in 2023. Every six-ish days (though this one is very soon after the previous one, which was late) I've been revisiting a month from my recent past, noting work and family developments as well as the books I read in that month. I've found it a pleasantly cathartic process, especially in recent circumstances. If you want to look back at previous entries, they are all tagged under bookblog nostalgia

From here on it gets much easier to track my own movements, as this was the month I signed up for Foursquare (now Swarm) and faithfully recorded places I had been. 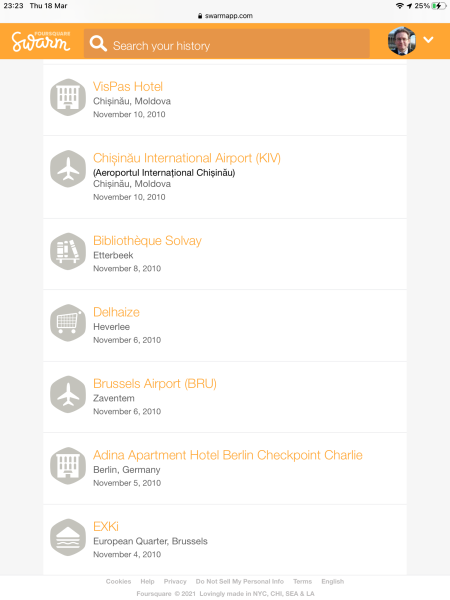 So I know that in the course of the month, I went to Berlin (cannot now remember why), Moldova (to meet our client there), London (again, cannot remember why) and Dubrovnik (to speak at a conference). That's quite a lot. I was still using the crappy HTC Desire, the worst gadget I have ever bought, but got one good photo of locals using the free wifi in Pushkin Park in Chișinău. My favourite blog post of the month was on what happened to the Doctor Who companions?

Non-fiction 5 (YTD 66)
Doctor Who: The Writer's Tale - the Final Chapter, by Russell T. Davies and Benjamin Cook
The Love Letters of Henry VIII
The Cyprus Question and the EU, by Andreas Theophanous
Shakespeare (the illustrated edition), by Bill Bryson
Elizabeth and Essex, by Lytton Strachey

Fiction (non-sf) 5 (YTD 45)
The Adventures of Huckleberry Finn, by Mark Twain
The Thorn Birds, by Colleen McCullough
Wolf Hall, by Hilary Mantel
The Other Boleyn Girl, by Philippa Gregory
The Inheritance of Loss, by Kiran Desai

Doctor Who 8 (YTD 64, 71 counting comics and non-fiction)
The Coming of the Terraphiles, by Michael Moorcock
The Doctor Who Annual 1976
Lucifer Rising, by Andy Lane and Jim Mortimore
System Shock, by Justin Richards
Wolfsbane, by Jacqueline Rayner
Doctor Who Annual 1977
Placebo Effect, by Gary Russell
White Darkness, by David McIntee

Comics 2 (YTD 17)
Scott Pilgrim Gets It Together, by Bryan Lee O'Malley
Fables: 1001 Nights of Snowfall, by Bill Willingham 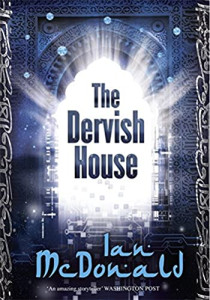 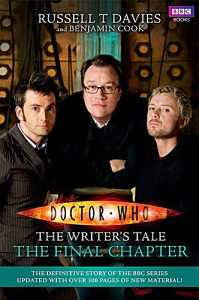 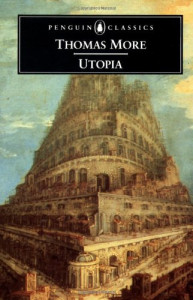 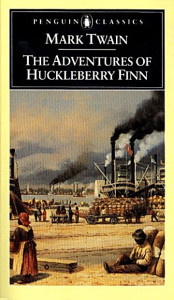 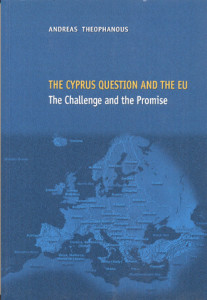 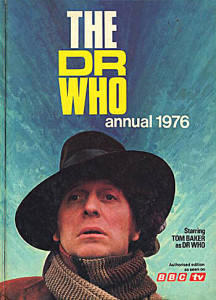 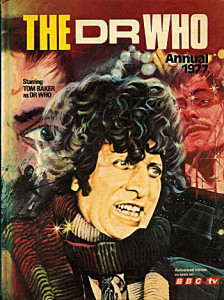 I have been slack about Big Finish recently - over the last few months, I picked up listening to the tremendous backlog of their output that I had not previously got to, but have blogged very little here. (In particular, I recommend Susans War with Carole Ann Ford, and the David Tennant/Tom Baker crossover Out Of Time 1.) Anyway, important to record that I got and thoroughly enjoyed the six Legacy of Time audios, released to celebrate Big Finish's 20th anniversary in 2019. Here's the promotional video:
What the video doesn't say is that all six stories are about time paradoxes, which is a trope used surprisingly rarely in Doctor Who given that it's a show about a time traveller. (The first TV story that really used it was The Space Museum in 1965, I think.) I would also say that all six stories are good, taking the theme in a slightly different direction each time. Part of the attraction is always the stunt casting, of course, but even so the actors rise to the occasion as is not always the case. So if you're not sure about Big Finish but want a smorgasbord of different Doctors, this is probably a good sample to take. €30 for the download is really not all that much for six solid hours of entertainment.

In detail, the stories are:

1. Lies in Ruins by James Goss, one of my favourite Who writers, bringing together two great archæologists, River Song and Bernice Summerfield, with the Eighth Doctor and a mysteriously dim new companion. A good double entendre in the title.

2. The Split Infinitive by John Dorney, a bit more moored in Big Finish continuity than others, with Ace and the Seventh Doctor separately interacting with the Counter-Measures team (from Remembrance of the Daleks) in the 1960s and 1970s respectively.

3. The Sacrifice of Jo Grant by Guy Adams, bringing together Katy Manning and Jemma Redgrave as Jo Jones/Grant and Kate Stewart, and Tim Treloar doing his impressive Third Doctor impression.

4. Relative Time by Matt Fitton, possibly the best of the lot, with Georgia Tennant and Peter Davison as Jenny and the Fifth Doctor, along with the Big Finish criminal Time Lord known here as The Nine. Rather glorious.

5. The Avenues of Possibility by Jonathan Morris, another one rooted in Big Finish continuity with the Sixth Doctor and Charley Pollard (India Fisher) having another adventure with D.I. Patricia Menzies (Anna Hope), this time however involving timeslips to 18th-century London and Henry Fielding, author of Tom Jones.

6. Collision Course by Guy Adams again, which is partly an excuse for Louise Jameson and Lalla Ward as Leela and Romana to spark off each others' reminiscences of their Doctor (who is also my Doctor); ending with a sort of rave-up with David Bradley as the First Doctor, Frazer Hines as the Second, Tim Treloar as the Third, Peter Davison, Colin Baker, Sylvester McCoy, Paul McGann and nonchalantly David Tennant.

I thought this was great. Well worth a listen.
Collapse