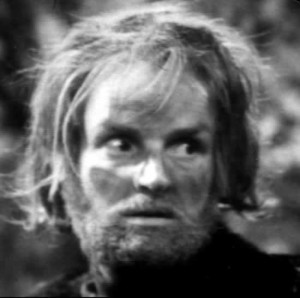 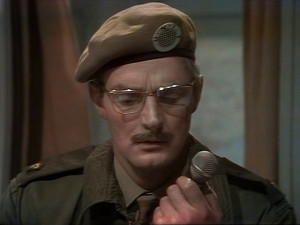 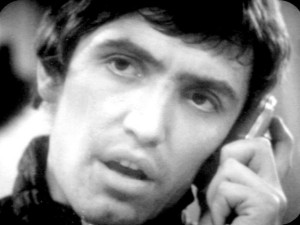 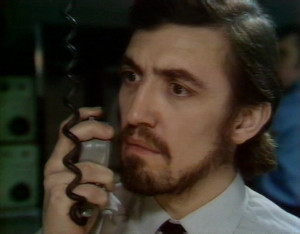 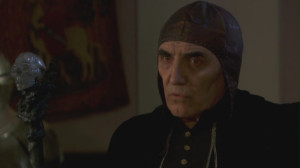 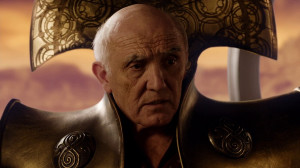 13 February 2015: death of Hugh Walters, who played three different roles in three different decades of Old Who: William Shakespeare in the story we now call The Chase (First Doctor, 1965), Runcible in The Deadly Assassin (Fourth Doctor, 1976), and Vogel in Revelation of the Daleks (Sixth Doctor, 1985). 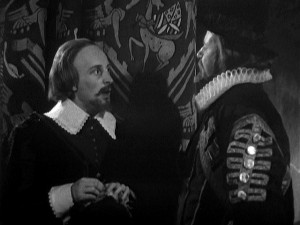 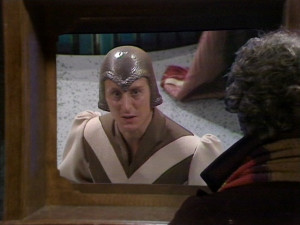 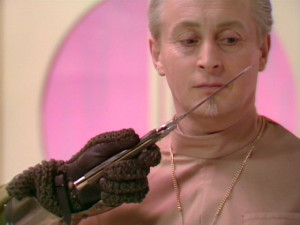 13 February 1965: broadcast of "The Web Planet", first episode of the story we now call The Web Planet. The Tardis is pulled off course to the planet of Vortis; Ian and the Doctor explore, and a mysterious force controls Barbara through her bracelet. 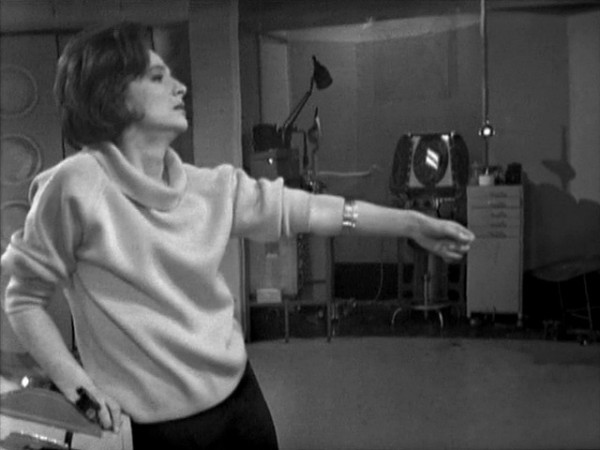 13 February 1971: broadcast of third episode of The Mind of Evil. The Master takes over the prison with the help of the prisoners, captures the Doctor, and subjects him to 'orrible visions. 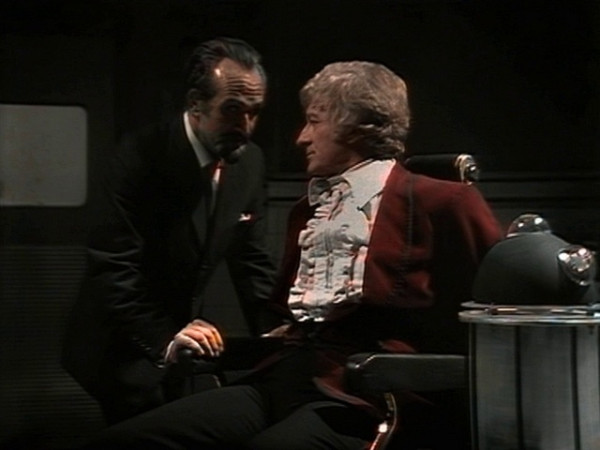 13 February 2008: broadcast of Adam (Torchwood), the one with the alien ringer in the Torchwood team. 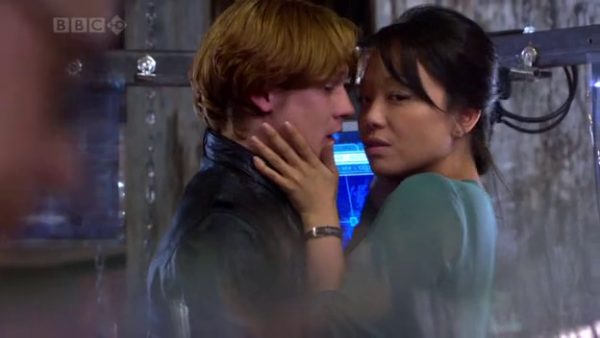 also 13 February 2008: broadcast of Reset (Torchwood), the one where Martha arrives and Owen is killed (for the first time). 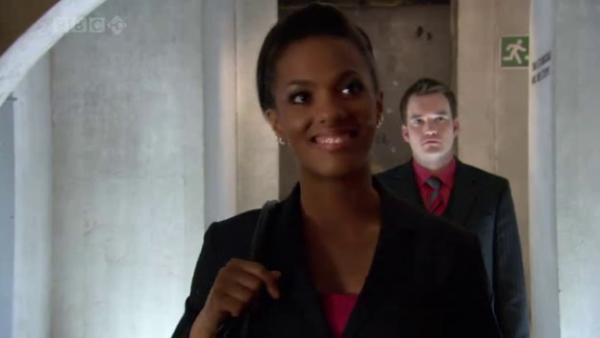 Coincidentally, it was an appropriate week to watch Rain Man, as it turned out. On Thursday, we had a brief court hearing, done informally and swiftly but none the less fully official, to assign guardianship rights for U to us, now that she has turned 18 - six years, almost to the day, after we done the same for B. Belgian law used to have a concept of prolonged minor status for people in the same position as us and our daughters; as a result of a European Court of Human Rights ruling, it has been changed to guardianship, where the court gives us full responsiblity for exercising all decision-making power for the girls. They are both legally adult, and it's reasonable to have a proper process for depriving them of the rights that most adults have, but which they will be unable to exercise. First time around in 2015, the magistrate (like us) was new to the process and navigated his way through it with care; six years on, he is an old hand and knew exactly what to do.

When I first watched Rain Man, soon after it came out, autism was not a particularly well known issue and of course I had no idea of how it would affect my own life. Once it did become part of my life, the legacy of Rain Man both was and wasn't helpful; on the one hand, it gave people a cultural reference point when I explained about our family situation; on the other hand, the specifics of Raymond Babbitt as portrayed often raised expectations that our daughters might have savant-type mathematical skills, or even just be able to talk. Still, on balance the existence of the film has been more helpful than not. 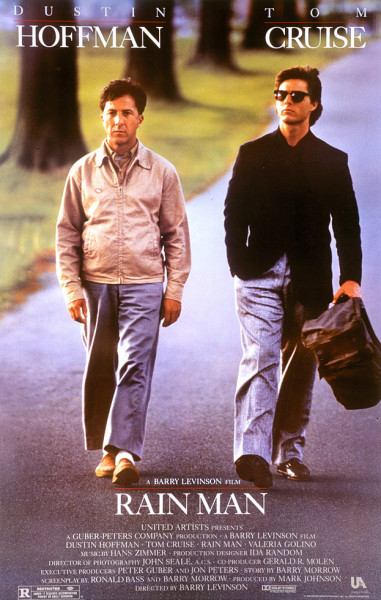 That year's other Best Picture nominees were The Accidental Tourist, which I have not seen, and Dangerous Liaisons, Mississippi Burning and Working Girl, which I have. IMDB users rank Rain Man 2nd on one system and 11th on the other, with Die Hard ahead of it on both lists.

I have seen 17 other films made in 1988, not quite as many as last year. They were: Beetlejuice, Die Hard, Big, Who Framed Roger Rabbit, The Naked Gun, A Fish Called Wanda , Mississippi Burning, Dangerous Liaisons, Working Girl, The Adventures of Baron Munchausen, The Unbearable Lightness of Being, The Big Blue, Earth Girls Are Easy, Gorillas in the Mist, Without a Clue (1988) and The Navigator: A Medieval Odyssey. I have fond memories of most of these, though I don't really get the general love for Beetlejuice.

Here's a trailer for Rain Man.
There is only one returning actor from previous Oscar-winning films, but it's a big one: Dustin Hoffmann won his second Best Actor Oscar here, his first being for Kramer vs Kramer and having just missed in Midnight Cowboy. The three roles are utterly different from each other, and all three are great performances. 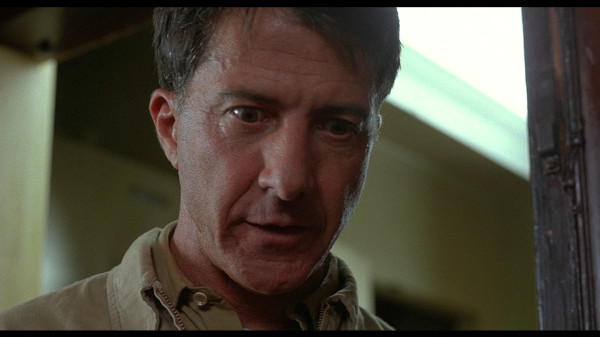 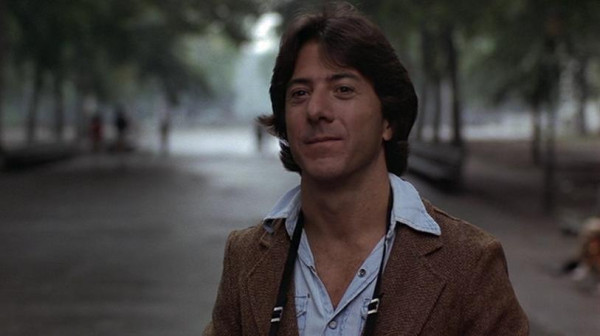 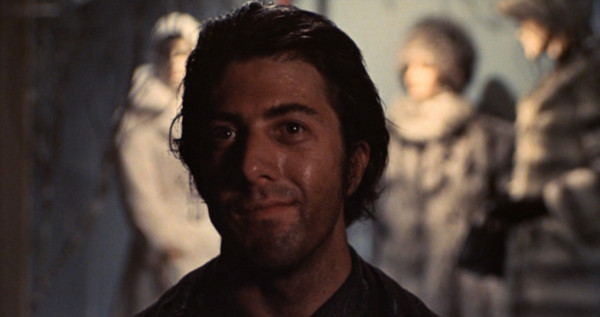 Incidentally, I was struck by how many of the smaller parts are played by people who have no other film appearances recorded in IMDB.

In case you didn't know, it's the story of self-centred young Charlie Babbitt from the Midwest, living in LA, who discovers that his dead father has left most of his estate to the autistic older brother who he had completely forgotten. They journey across America together and Charlie finds redemption. I have complicated feelings about this film for reasons that should be fairly obvious.

To start with the usual, there is precisely one significant black character, Ray's main carer Vern, who is clearly his main relationship in his residential home, played by Michael D. Roberts. 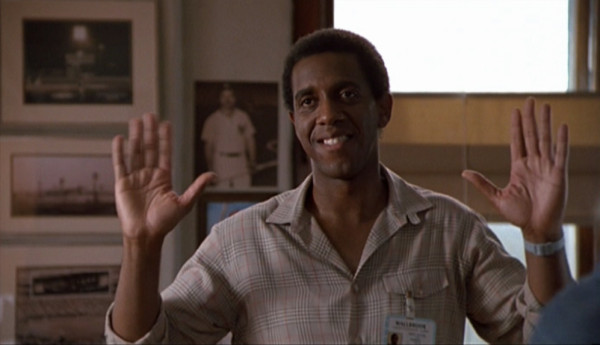 And the plot, we have to admit, is a bit contrived. If I were running a place like Walbrook, I'd have put some security protocols in place to decrease the chance of relatives turning up out of nowhere and absconding with the residents. Ray's autism is finely tuned to get them where they need to be. The least realistic part of his portrayal is the way in which Charlie is able to calm him down very very quickly when he has a meltdown; if only it were that easy in real life! The other very atypical part is Ray's ability to count cards in Las Vegas, which wins Charlie just exactly enough money to pay off his debts and get luxury hotel rooms for them both. (Hoffman's insistence on the character having savant skills apparently led to the original director quitting the film.) 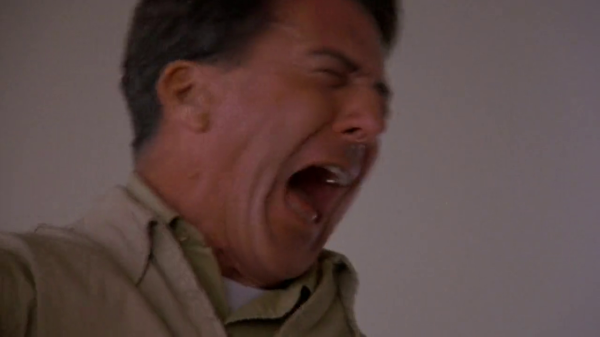 It's a film about two white brothers, so not surprisingly it's a Bechdel fail; there are several named women characters, but I don't think we see them talking to each other at any point. However, Valeria Golino is lovely as Charlie's girlfriend Susanna, who calls him on his selfishness and also finds ways to connect to Raymond. The music by Hans Zimmer, who went on to The Lion King, is atmospheric and haunting.
It also gave The Belle Stars a lift when their song Iko Iko, a favourite of Hoffmann's, was included in the soundtrack.
While I have my concerns about the plot, I don't have so many about the two leads. Tom Cruise was only 26, but had already achieved stardom with Top Gun. It's actually quite rare to have an Oscar-winning film with such a strong arc for the main character; I think the last was The Godfather. The scenes where he makes the connection between Raymond and his own childhood memories are very moving. But the film belongs to Dustin Hoffmann. Having complained above about some aspects of the scripting of his character, he performs beautifully and convincingly. He particularly catches the way many autistic people carry themselves, with hands clutched protectively close; and he catches the disjointed speech and thought patterns of those who are a bit more able than our girls very well as well. Despite the problematic aspects, it's a brilliant portrayal. 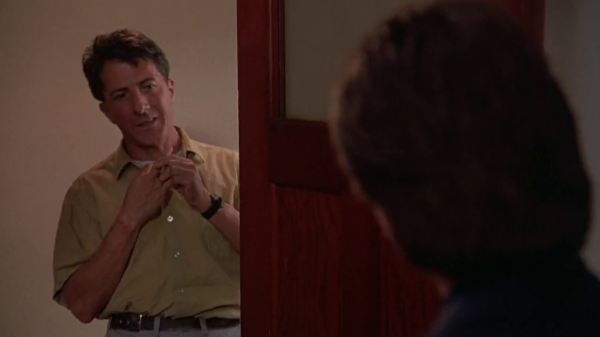 So, it's going in my top ten, just behind One Flew Over the Cuckoo’s Nest, which deals with similar issues but I think has a better constructed plot, and ahead of Terms of Endearment which has slightly less oomph.

Next up is Driving Miss Daisy, but before that it's Who Framed Roger Rabbit?