6 February 1965: broadcast of "Inferno", fourth episode of the story we now call The Romans, and nothing to do with the 1970 story of the same name. The Doctor accidentally sets fire to Nero's plans for Rome, and Nero decides to burn the city down. The time travelers are reunited, the Doctor and Vicki unaware of Ian and Barbara's adventures. 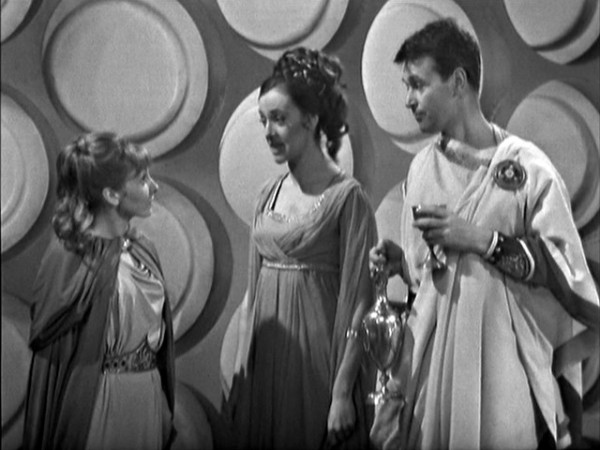 6 February 1971: broadcast of second episode of The Mind of Evil. The Doctor speaks Chinese, but the Chinese assistant attacks the American delegate to the peace conference. 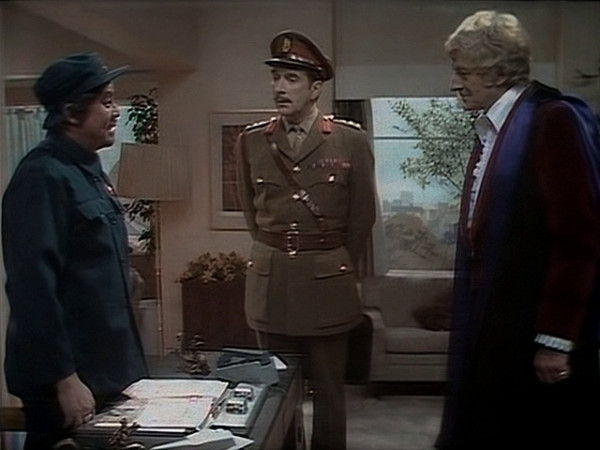 6 February 2008: broadcast of Meat (Torchwood), the one with the icky alien source of, well, meat. 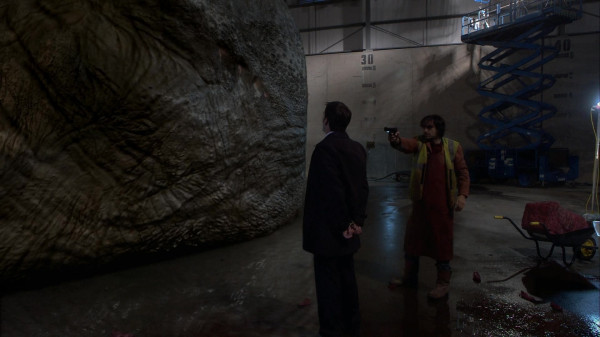 A year since the last time I was on an aeroplane, coming back from Gallifrey One in Los Angeles. I really miss travel, and I really miss getting together physically with friends and not-yet-friends who love the same things that I do.

See you soon, I hope. 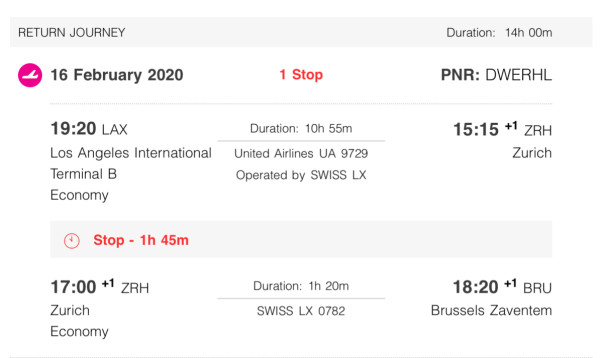 The Last Emperor won the Oscar for Best Picture of 1987, and also eight others: Best Director (Bernardo Bertolucci), Best Art Direction, Best Cinematography, Best Costume Design, Best Film Editing, Best Original Score, Best Sound and Best Screenplay Based on Material from Another Medium. This was a clean sweep of all the categories in which it was nominated; I have not checked but I don't think there are many Best Picture winners for which that is that case. That year's Hugo winner, The Princess Bride, was nominated in one category (Best Original Song) and lost (to "(I've Had) The Time of My Life" from Dirty Dancing, a good call by the voters). 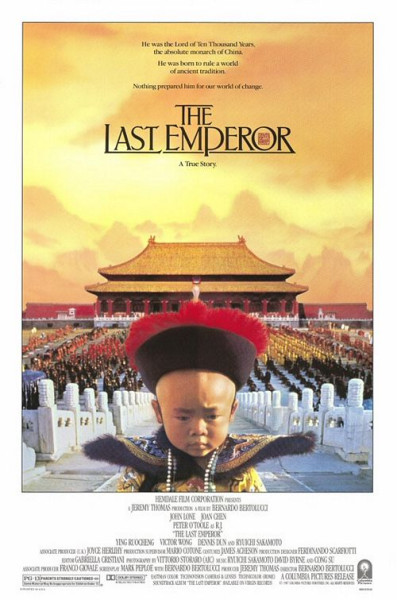 That year's other Best Picture nominees were Fatal Attraction, which I have seen, and Broadcast News, Hope and Glory and Moonstruck, which I haven't. IMDB users rank The Last Emperor 19th on one system and 20th on the other, which is pretty poor for an Oscar winner.

1987 is my best year yet for films, no doubt reflecting the fact that it was my first calendar year as a student with a steady girlfriend. I count 23 films made that year that I have seen, in IMDB order roughly as follows: Predator, The Untouchables, Dirty Dancing, RoboCop, Spaceballs, The Princess Bride, Raising Arizona, Empire of the Sun, Fatal Attraction, The Living Daylights, Good Morning Vietnam, The Witches of Eastwick, The Last Emperor, Three Men and a Baby, Roxanne, WithNail and I, Babette's Feast, Cry Freedom, 84 Charing Cross Road, The Dead, The Belly of an Architect, Wish You Were Here and A Month in the Country. I have positive memories of almost all of these, but like IMDB users I don't find The Last Emperor particularly standing out from the crowd. Here's a trailer.
Chinese actors here play Chinese characters and Japanese actors play Japanese characters (we have not always been so lucky). This does limit the number of returning faces from previous Oscar- or Hugo-winning films; in fact I think there is precisely one, but it's a significant one, Peter O'Toole as Reginald Johnston, twenty-five years after Lawrence of Arabia.

This is a gorgeous film to look at, but I did not always find it easy to follow exactly what was happening. The core narrative is sound - a little boy who has incomprehensible power thrust upon him, but grows up to find that his power is limited and that he is in fact the pawn in others' political games; and he then achieves some personal redemption after losing everything. But the plot is delivered more in spectacle than in emotion; it's quite difficult to relate to Puyi (and indeed this is partly the point). I certainly lost track of the intricacies of the short-lived state of Manchukuo, and the role of the Japanese was not completely clear. And Puyi's love life is told rather than shown; he gets cute girls as his wives and concubines, but it's never very clear what he makes of them or what we are supposed to make of them. I do have a soft spot for Joan Chen as the number one wife, whose love life is more interesting than his; she shares my birthday (though a different year). 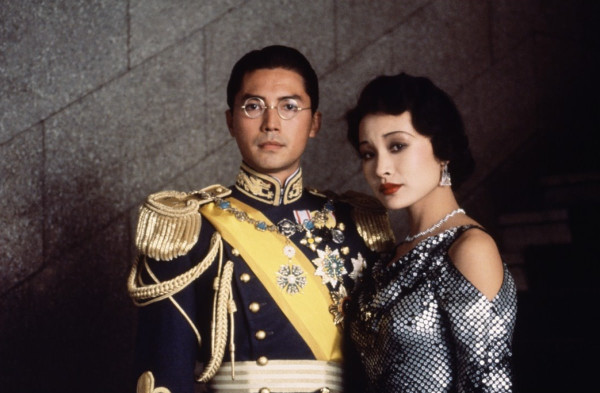 I think the (Oscar-winning) music is OK but not great - it feels liek what non-Chinese audiences expect Chinese music to be like (actually written by a Japanese composer of course).
But I have to concede, as I said earlier, that it's a glorious film to look at: the imperial scenes, contrasted with the fake glamour of Manchukuo and the gritty reality of the People's Republic, are a real feast for the eyes. It's not surprising that it did so well in the more technical Oscar categories. The Chinese authorities allowed Bertolucci to film in the Forbidden City itself, and it was a good investment.

This is the sixth biopic to win an Oscar (I'm no longer counting A Man for All Seasons in that category), and I rate it third after Gandhi and Lawrence of Arabia, but ahead of The Life of Emile Zola, Patton and The Great Ziegfeld.

After some deliberation, I'm putting The Last Emperor almost exactly half way down my list of Oscar winners (and these are mostly very good films, so half way down is still not bad). My totally definitive listing of the first 60 (the most recent decade in red) is as follows:
A somewhat meh decade, with half of them better than average and half worse; a new entry for the bottom 10 for the first time since 1970; but four out of ten in the top quartile, and two in the new top ten.

Next up in this sequence is Rain Man.

I also read Puyi's autobiography, published as The Last Manchu: The Autobiography of Henry Pu Yi, Last Emperor of China. The second paragraph of the third chapter of my English translation (translator unattributed, interestingly) is:

(The English translation omits a couple of sentences in the Chinese text about the young Puyi's bowel movements, which I think is not unreasonable.)

I generally enjoy biographies and autobiographies, and this was no exception. Obviously we lack the visual texture of the film, but we get a lot more political analysis and also some more interesting characters - Puyi's father is a major if ineffectual presence in the earlier part, for instance, and Yasunori Yoshioka, Puyi's Japanese minder during the Manchuria period, is devastatingly depicted. (They communicated in English, as Puyi spoke no Japanese and Yoshioka's Chinese was poor.) Interesting to note that Reginald Johnston was not yet 40 when hired by the imperial household; Peter O'Toole was 55 in 1987.

One really important point that is left out of the film entirely: Puyi and his family were Manchu rather than Han. This is a major source of tension between the imperial court and the rest of China for the first half of the twentieth century, and then weirdly provides Mao with a good reason to keep the former emperor and his family around rather than eliminate them, in order to keep the border tribes happy.

It's also interesting that Puyi is a much less pleasant character in his own book than in the film. (Though even the book omits his worst behaviour.) Of course, this is partly because as a result of his process of reorientation (what we might now call brainwashing), he felt the need to admit to his former faults as a human being. The film needs to portray him as an innocent to whom things happen; the book makes it clear that to the extent that this was true, he found it deeply frustrating.

You don't get many autobiographies by former emperors, and you can get this one here. It's not clear to me if this was ghost-written - I've seen attributions to Puyi's brother Pujie, and also to Lao She, author of Cat Country; but actually I have little difficulty in accepting that he probably wrote most of it himself - he writes a lot about writing, which suggests that it was an activity he enjoyed and was possibly good at. Edited to add: I really did not dig very far on this point; it's fairly well recorded that the ghostwriter was Li Wenda of the People's Publishing Bureau, although Puyi's widow successfully sued him for the full copyright on the book (it had originally been split between ex-emperor and ghostwriter). Pujie (who lived to 1994) and Li Wenda were brought in as advisers for the film. 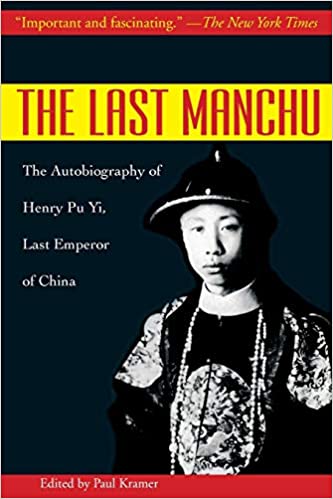