5 December 2013: death of Barry Jackson who played Ascaris in the story we now call The Romans (First Doctor, 1964), Jeff Garvey in Mission to the Unknown (First Doctor era, 1965) and Drax in The Armageddon Factor (Fourth Doctor, 1979). 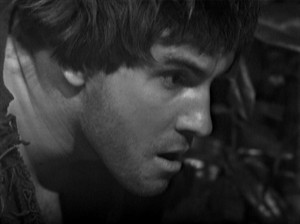 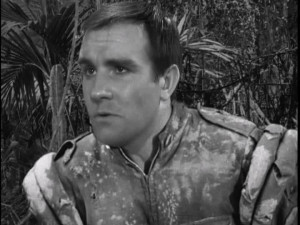 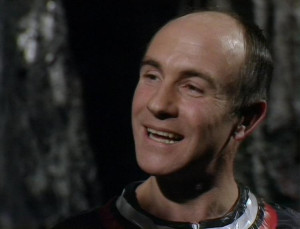 5 December 1964: broadcast of "Day of Reckoning", third episode of the story we now call The Dalek Invasion of Earth. This is the fantastic episode with Jenny, Barbara and Dortmun fleeing across London to Francis Chagrin's amazing music, followed by Dortmun's last stand against the Daleks. This is such a brilliant sequence.
5 December 2015: broadcast of Hell Bent, ending Series 8 of New Who. Returning to Gallifrey, the Doctor must face his own people, the Time Lords, but how far will he go in his quest for vengeance? Does he have another confession? And how fiercely does his rage towards them for causing Clara's death burn? 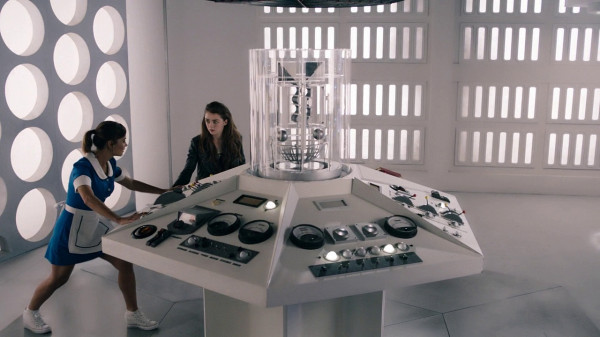 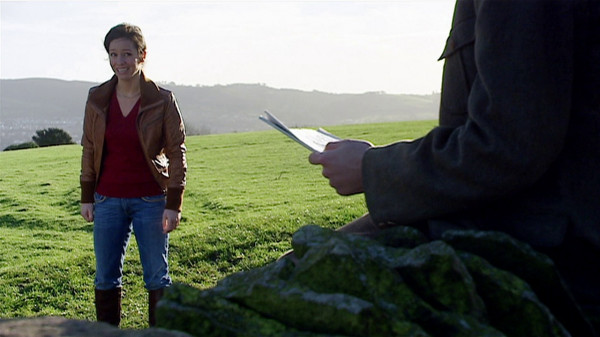 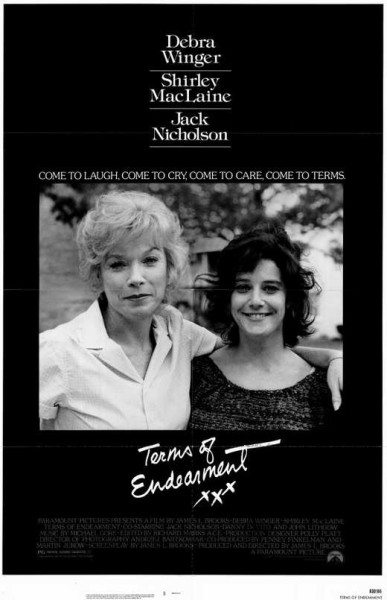 The other Best Picture nominees were The Big Chill, which I have seen, and The Dresser, The Right Stuff and Tender Mercies, which I haven't. It's not super popular among IMDB users, who currently rank it 17th for the year on both systems. Other films I've seen from that year (in rough IMDB order): Return of the Jedi, Trading Places, Octopussy, The Meaning of Life, Blue Thunder, The Big Chill, Local Hero, Educating Rita, To Be or Not to Be and Heat and Dust. I have a fond nostalgia for almost all of these (except Heat and Dust, which I remember as rather dull), but Terms of Endearment is better than most of them. Here's a trailer.
Sometimes when I look for links with previous Oscar winners I'm scrabbling a long way down the cast list. Not this time; Shirley MacLaine, here the central character Aurora Greenway, was also the lead actress in both The Apartment in 1960 and Around the World in Eighty Days (1956), an impressive 27 years ago. We've had longer intervals (33 years for Howland Chamberlain) but not at this level. 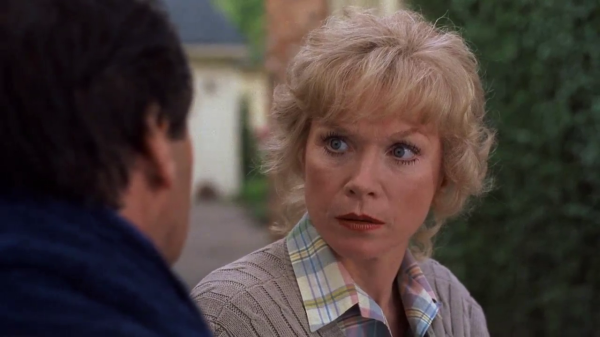 And on the other side of Aurora's garden fence, we have Jack Nicholson and Danny De Vito, both of whom were also in One Flew Over the Cuckoo's Nest eight years ago. 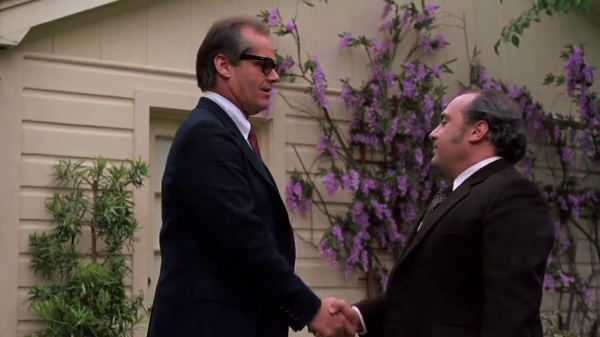 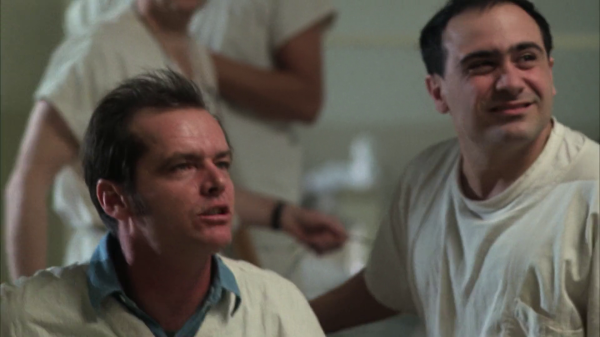 I have rather bounced off the last few Oscar winners with a contemporary domestic setting (Ordinary People, Kramer vs. Kramer, to an extent The Deer Hunter and also Annie Hall). But I have to admit I really enjoyed Terms of Endearment. The first 94 minutes are funny, well-observed and nicely written dynamics of a combustible mother-daughter relationship, and their shifting love lives; and then we get the Plot Twist, and the remaining 38 minutes are much less funny but equally well observed and nicely written. Somewhat to my surprise, I'm putting it in my top ten, behind One Flew Over the Cuckoo's Nest but ahead of Midnight Cowboy.

To note the one negative, and I'm afraid it's the usual plus a little extra: no non-white faces are visible anywhere in the film (largely set in Houston, which waas and is 25% African-American), and also the book's exploration of the less well off parts of town through Rosie, Aurora's maid, has been completely removed. So we are left with a story about white middle class people.

But the trade-off is that we get a much more female perspective than is usual. The last Oscar-winner where the lead actress was also the central character was The Sound of Music, nineteen years ago in 1964; the only other Oscar winner where the central dynamic is between two women, with men largely as decoration, rather than the other way round, is All About Eve, 33 years ago in 1950. And it's superbly carried off by Shirley MacLaine and Debra Winger as Aurora and Helen. I don't think I had seen Winger in anything else (I see that she had a blink-and-you-miss-it appearance in E.T., but I blinked and missed it). 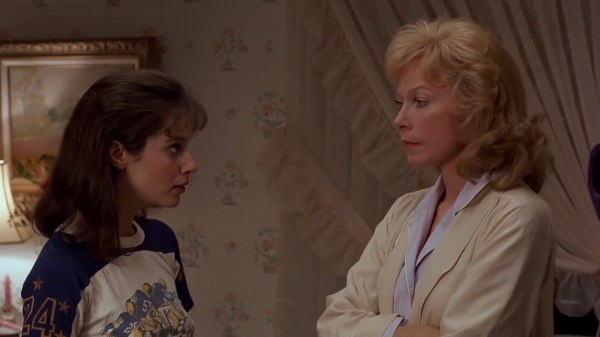 It's a good story. At first I thought that Aurora's self-obsession would get old rather fast, when she explodes with rage about becoming a grandmother:

But then the development of both mother and daughter is delicately done, with each having their love affairs, Aurora with Jack Nicholson's randy astronaut next door and Helen with the bank manager in Iowa played by John Lithgow (with a real feeling of sense of place for both Houston and Iowa/Nebraska). These four performances all got Oscar nominations, but in only two categories, won as noted above by MacLaine and Nicholson. 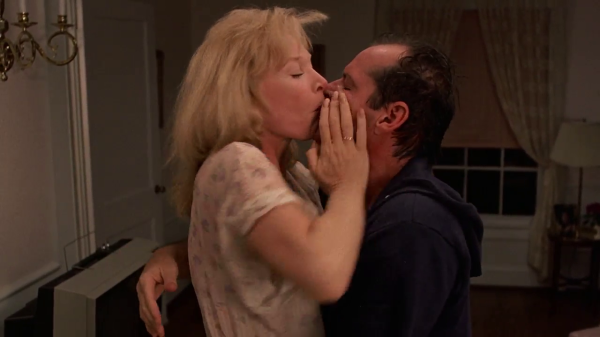 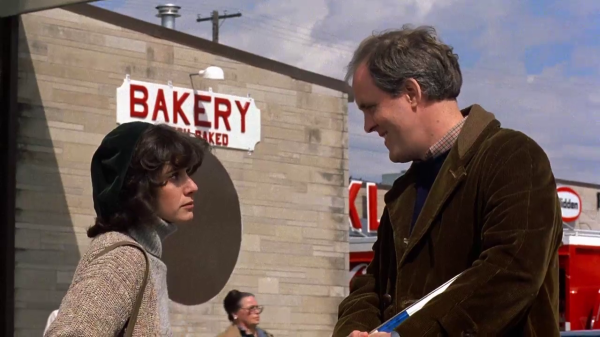 And the most memorable scene of many is Winger's as Helen, saying her goodbyes.

The music is well-judged and not intrusive (and, now that it's a few days since I watched the film, it's a bit earwormy).

But if you want a break from the original music, here is a lovely lovely fanvid of the film, with key scenes cut to Carole King's "I Feel the Earth Move".
Anyway, an unexpected pleasure.

One glorious bit of trivia: the cast and crew bought writer and director John L. Brooks a copy of Matt Groening's Life Is Hell as a gift. Brooks loved it, and contacted Groening to explore how they might work together. And so The Simpsons came to be.

The film is based on a novel by Larry McMurtry, best known for Lonesome Dove, though I have not read any of his other work. The second paragraph of the third section of the book is:

Then she jumped. Her mother had begun immediately to honk at the Volkswagen, and the Cadillac had a very loud horn. Hearing it unexpectedly gave everyone, Emma included, apprehensions of emergency. Against such honking the little green car had no chance—the Cadillac swept it aside as easily as an ocean liner might sweep aside a canoe. The driver, assuming that catastrophe had overtaken someone, turned into a driveway and didn't even honk back.

The book has some major differences with the film - in fact, I can’t think of another case where a novel has been adapted for an Oscar-winning movie with such big differences, apart perhaps from Mrs Miniver (which is not really a novel). The first 360 pages of 410 are all about Aurora, with the plot of the film which covers over a decade, originally scheduled just over the hot summer on 1963. There is no astronaut; instead an older retired general, and the Danny De Vito character gets a lot more page space than he did on screen. Only on page 361 do we switch to Helen and her life in Iowa, and the Plot Twist comes on page 391 with less than 5% of the book to go (there is no New York scene, which I think an improvement - the one bit of the film that did not really work for me). I hugely enjoyed it. Aurora's character is monstrous, fascinating and funny on the page; I think it was wise to balance her character much more with Helen's for the screen adaptation, but it works well on the page. You can get it here. (It is not yet available electronically.)

Next up in the Oscar-winners sequence is Amadeus.