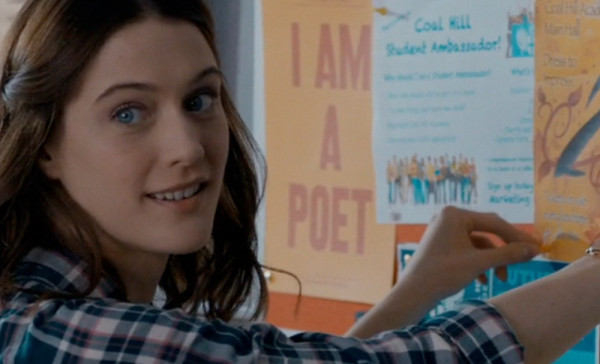 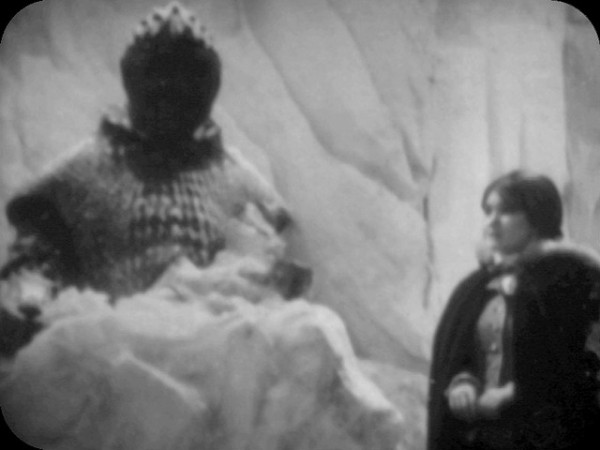 25 November 1978: broadcast of first episode of The Androids of Tara. Romana finds the fourth segment of the Key to Time, but she and the Doctor get enmeshed in the local dynastic struggle. 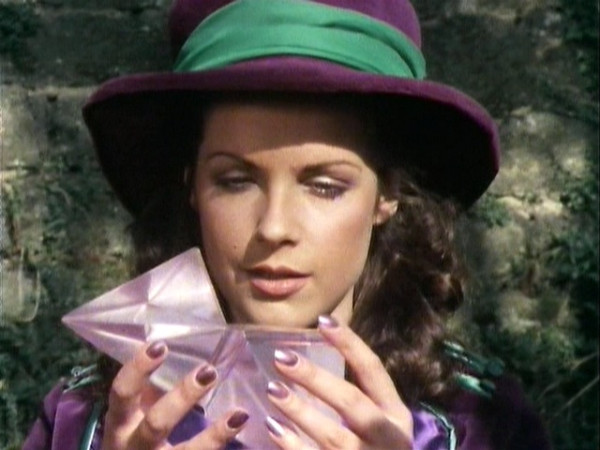 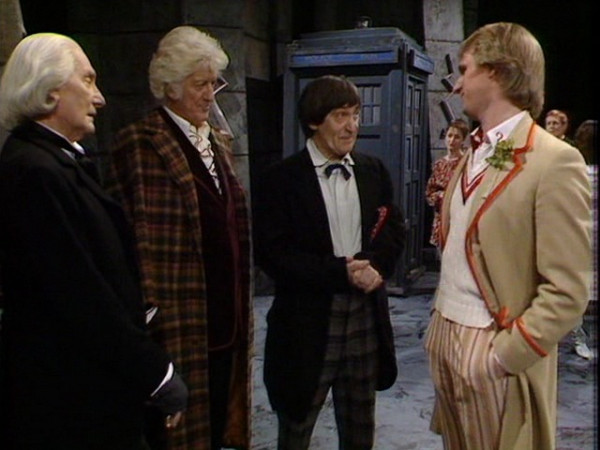 25 November 2009: webcast of fifth episode of Dreamland. Deep beneath the Dreamland base, the Doctor faces the malevolent Skorpius Flies, whilst Jimmy and Cassie get caught up in the Viperox attack on Dry Springs, while trying to protect the TARDIS... 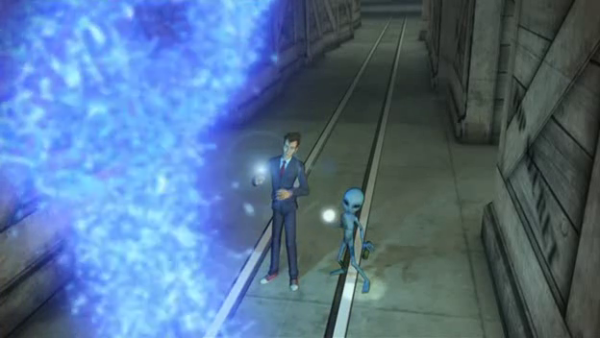 25 November 2018: broadcast of The Witchfinders. Team TARDIS lands in early 17th century England in the midst of a witch trial, and King James becomes suspicious of the Doctor. 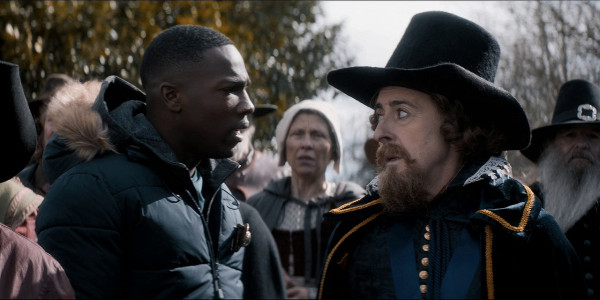 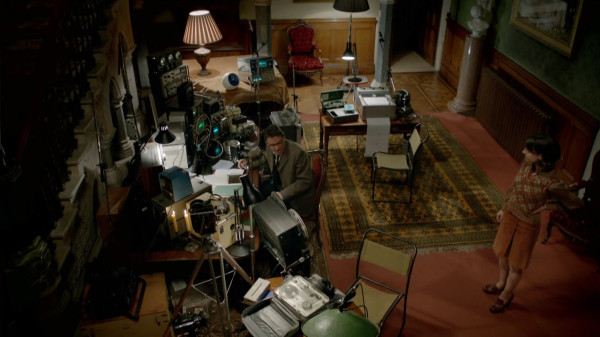 The third series of Secret Army is a real masterpiece of story-telling. The first series and second series had a fairly static situation, with a sort of resistance-romp-of-the-week plot, though with the extra tension that regular and semi-regular characters got killed off at fairly frequent intervals. But the last thirteen episodes are driven by the approaching Allied armies, who landed in Normandy at the end of the second series; the end of the German occupation is coming, and everyone will have a reckoning, like it or not. Even with victory in sight, the resistance is torn ideologically, with Lifeline under threat from the Communists; and Albert spends most of the series in jail on suspicion of murdering his wife, which enables the rest of the cast to show their talents.

As usual I'm going to single out a few episodes for attention. I've generally avoided calling out appearances in Secret Army of actors who also appeared in Doctor Who and other things that I love and follow, but for the fourth episode, A Safe Place, it was irresistible.
https://vc.videos.livejournal.com/index/player?player=new&record_id=1553840
Yes, in only his second year as a professional actor, that is Anthony Stewart Head, later of course to be Giles in Buffy (and the leader of the Krillitane in that great Doctor Who episode School Reunion), this time the co-ordinator of the Germans' latest wheeze to disrupt the network for crashed allied airmen. And as second German radio operator, it's Guy Siner, memorable to Who fans of course as the young General Ravon in Genesis of the Daleks, but also later to appear in all 85 episodes of Allo! Allo! as Lieutenant Gruber.

The episode is also remarkable for the scene set in a gay bar in downtown Brussels, which I present here.
https://vc.videos.livejournal.com/index/player?player=new&record_id=1554014
With 1970s BBC shows you can never be entirely sure, but I think it's a scene more sympathetic to the clubbers than the Nazis.

The climax of the entire show is the confrontation in the Candide in episode 10, Collaborators, between Reinhardt of the Luftwaffe and Albert and the rest of Lifeline. But neither side realises that the Communist resistance are not far away... and because Albert's cover has been so good, many people think that he has been too close to the Germans. In the 42nd minute of the 40th episode, we get here:
https://vc.videos.livejournal.com/index/player?player=new&record_id=1566434
The next three episodes are almost unbearably tense, as our heroes get to grips with the new state of affairs. I'm really at a loss to think of any other show which had a fairly static (if perilous) situation informing the background of 90% of the total run time, and then threw our characters into completely new circumstances at the very end. Since so many key characters have already been killed off, we really don't know who will live and who will die. It's a tremendous arc of storytelling.

Some bits don't work as well as others. I think the plotline in which Reinhardt is executed by his own side feels rather bolted on, a historical curiosity (in that there was one real execution of a German officer by his own side after the war was over, but in the Netherlands not Belgium). I think also if I'd been watching an episode a week rather than one every evening, the romance between Monique and an English officer would have seemed a bit less whirlwind. But it's high time she got over Albert anyway. And apart from what happens to Lifeline in Brussels, the drama of Kessler's ultimate escape, facilitated by his Belgian girlfriend Madeleine, is tremendously effective. I give you the last six minutes of the show, complete with end titles, starting with Kessler's exit in style.
https://vc.videos.livejournal.com/index/player?player=new&record_id=1566494
This series was first shown on Saturday nights in late 1979, after Doctor Who; the first episode was braodcast the same evening as the last episode of Destiny of the Daleks, and then it tracked City of Death and The Creature from the Pit, concluding the same evening as Nightmare of Eden. (Spoiler: the Secret Army finale was better.)

There is once again a book-of-the-series, Secret Army: The End of the Line, by chief writer John Brason. It is largely a novelisation of three episodes: the bubonic plague one, Ring of Roses, mentioned above; the raid on a V2 launch site, Just Light the Blue Touch Paper; and the finale, The Execution, with linking narrative. The second paragraph of the third chapter, "Just Light the Blue Touch Paper", is:

Monique turned to Alain. ‘And you said you thought I was being followed yesterday?’

I think if I had been advising Brason, I'd have suggested giving even more time to the climax of the story and dropping the earlier bits. The plague episode is particularly weird to watch in 2020, but I think it's a dramatic miss as the tension of the situation is resolved in a bound at the end. The V2 episode looks great, but surely our heroes are acting somewhat out their usual mandate here? As it is, the two penultimate episodes, Days of Judgement and Bridgehead, are dispatched in about three pages. However, at the end, everyone is where they are meant to be, and the book purchaser of 1979, who would have had no idea that in forty years' time we could stream the whole show, would have been glad to be reminded of a few key moments. You can get it here.

It would have been completely impossible to write this series of posts without Andy Priestner's indispensable 650-page The Complete Secret Army: the unofficial and unauthorised guide to the classic TV series, which you can get here. It's structured in a way that makes it difficult to determine which the third chapter is; this is the second paragraph of the intro to the section covering the third series.

Given that the third series is regarded as such an unequivocal success, with startling first transmission viewing figures (even for those episodes unaffected by the ITV strike), it is fascinating to discover just how much of that which made it on screen had been shaped by circumstance rather than as a result of Glaister and Brason's original plans, and how their crucial decisions, some of which were made very late in the day, ensured that it would be a series that would come to be regarded as one of the best BBC dramas of all time.

I am spoiled by the vast amount of Doctor Who analysis out there, but it's still gratifying to see good television subjected to good criticism. It's a book that is definitely a labour of love, but a love that is not blind and doesn't flinch from pointing out the show's occasional weaknesses.

Priestner takes us through the creation process, including the nuts and bolts of filming (though I wish he'd been a bit more specific about the Brussels locations) but also the backgrounds of actors, writers and directors, and an examination of influences on the show, and also its shadow cast into the future (including a despairing section on Allo! Allo!). There's a heart-breaking account where he gets the cast together years later to reminisce about their days on the show, and then discovers that the precious video he made of their conversation was taped over to record a family barbecue. (We've just been going through the video tapes in the attic ourselves, which tugs at the heartstrings a bit.) If you're thinking of revisiting Secret Army, now that it's easier to do so than ever, I recommend that you have Andy Priestner by your side.

I'll do one more post in this sequence, covering the Episode That Was Never Shown, and the series and book of Kessler.
Collapse