15 November 1910: birth of Geoffey Toone, who played Temmosus in Doctor Who and the Daleks (Cushing Doctor, 1965) and Hepesh in The Curse of Peladon (Third Doctor, 1972). 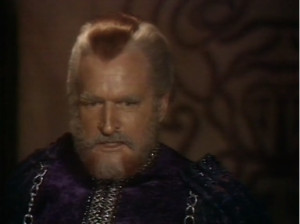 15 November 1926: birth of Richard Steele, who played Commandant Gorton in The War Games (Second Doctor, 1969), Sergeant Hart in Doctor Who and the Silurians (Third Doctor, 1970) 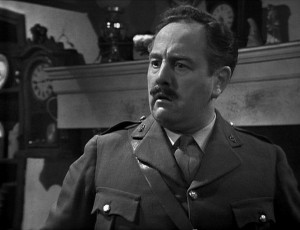 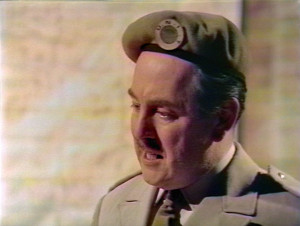 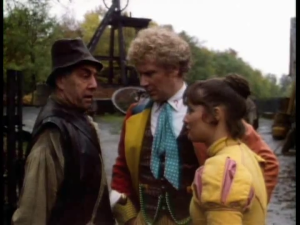 15 November 1933: birth of Donald Pickering, who played prosecutor Eyesen in The Keys of Marinus (First Doctor, 1964), Blade and his alien double in The Faceless Ones (Second Doctor, 1967), and Lakertyan leader Beyus in Time and the Rani (Seventh Doctor, 1987). 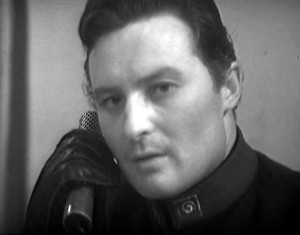 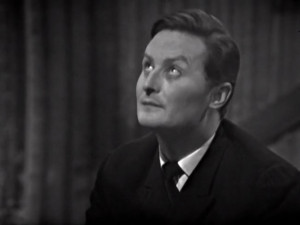 15 November 1975: broadcast of fourth episode of The Pyramids of Mars. The Doctor is forced to transfer Scarman to Mars, where he destroys the Eye of Horus, liberating Sutekh. But the Doctor manages to trap Sutekh in a time tunnel, destroying him and the priory. 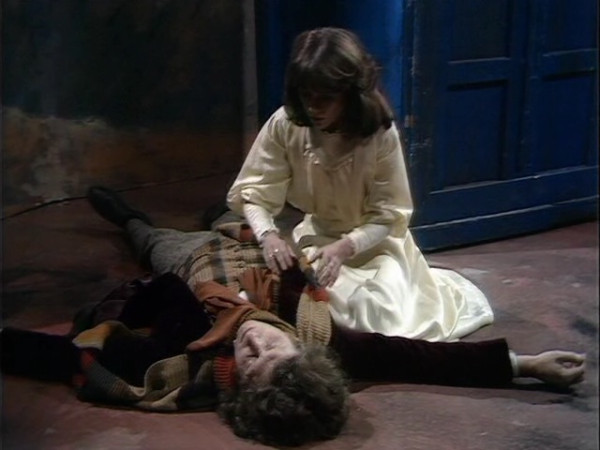 15 November 1980: broadcast of fourth episode of Full Circle. The Doctor helps the Starliner to leave Alzareus, and Adric stows away on the Tardis. 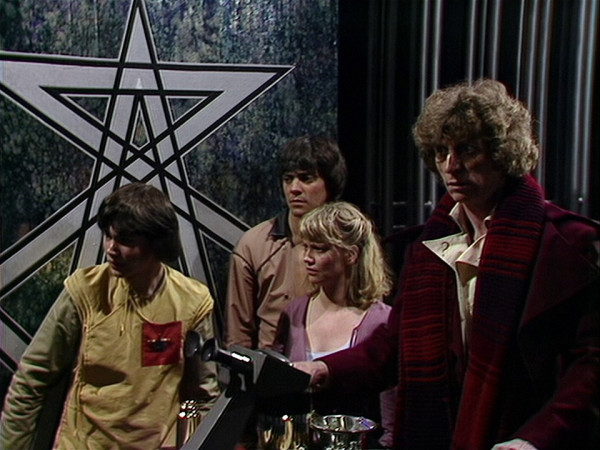 15 November 1986: broadcast of third episode of Terror of the Vervoids (ToaTL #11). The Vervoids are gradually killing off passengers and crew; Bruchner sets the ship's controls for a black hole to destroy them all.

15 November 1989: broadcast of fourth episode of The Curse of Fenric. The Ancient One arises to challenge the Doctor; Ace realises that Audrey's baby is her mother; and the Doctor challenges Ace's faith in him to release the Ancient One who then kills Fenric. 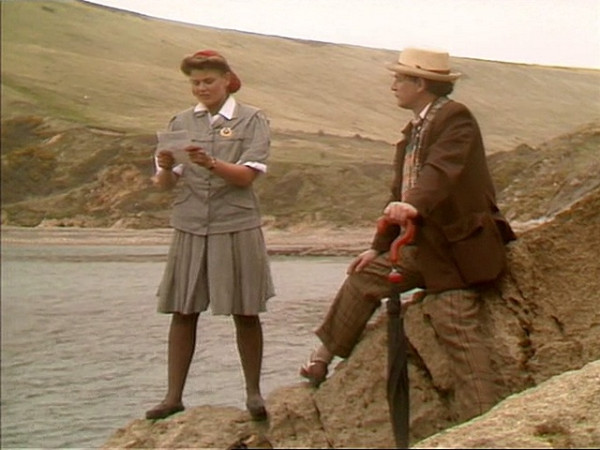 streage but true: The four episodes of The Pyramids of Mars, Full Circle and The Curse of Fenric were all broadcast on the same four dates in 1975, 1980 and 1989.

15 November 2009: broadcast of The Waters of Mars. The Doctor lands at Bowie Base One on Mars, on the day he knows it will be destroyed; he tries to change the history of the day, but is thwarted by Adelaide. 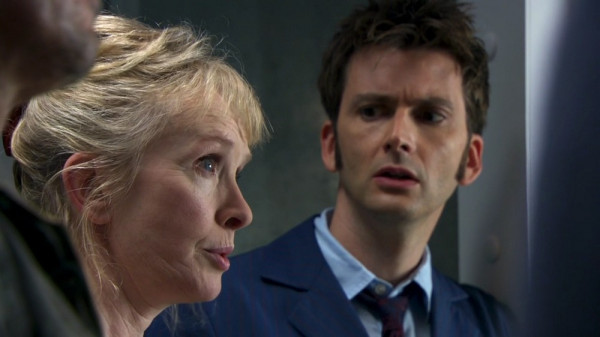 15 November 2010: broadcast of first episode of Goodbye, Sarah Jane Smith (SJA). Sarah believes that she has dementia. Can her replacement be trusted? 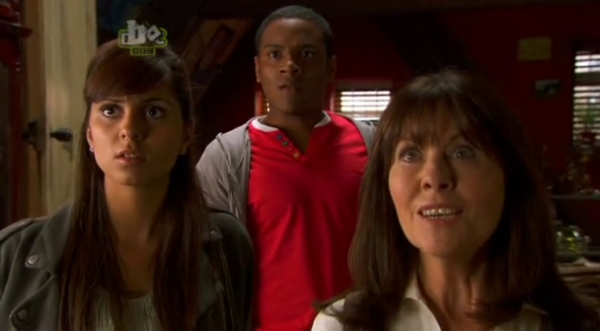 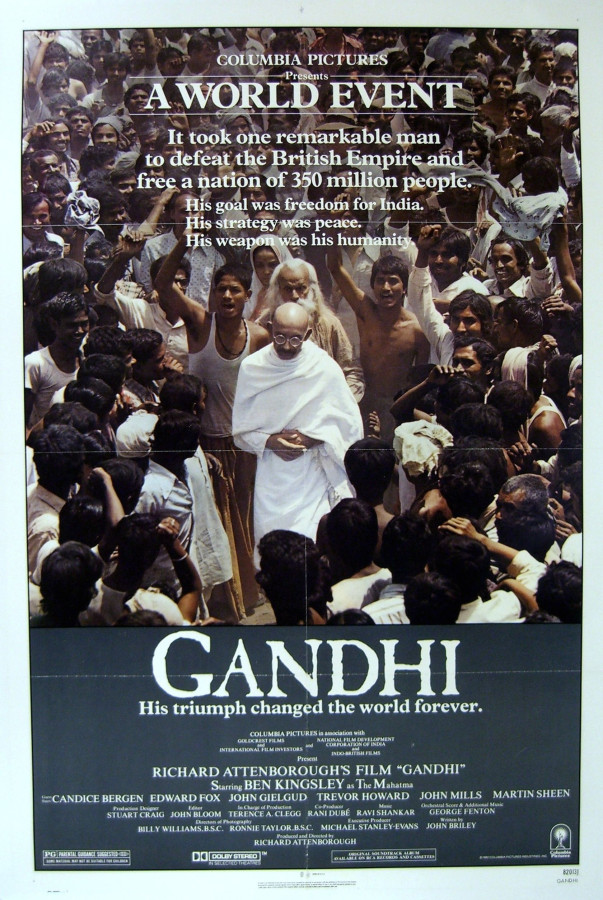 The other films up for Best Picture were E.T. and Tootsie, which I have seen, and Missing and The Verdict, which I haven't. IMDB users rank it 5th of the year on one list but only 22nd on the other. Apart from Blade Runner, the other films from that year that I have seen are Wrath of Khan, The Wall, Fanny and Alexander, Airplane II, The Year of Living Dangerously, Fitzcarraldo, Night Shift, The Draughtsman’s Contract and Who Dares Wins. Apart from the last, these are all films I very much enjoyed, or maybe that's just my uncritical fifteen-year-old self. Here's a contemporary trailer for the US market, leading with future President Bartlett.
This is the fifth or sixth biopic to win Best Picture (after The Great Ziegfeld, The Life of Emile Zola, Lawrence of Arabia, Patton and maybe A Man for All Seasons which was adapted from a stage play). It was two in a row for British directors and a largely British cast, though as it turned out this was a blip rather than a trend. I saw it in the cinema when it first came out, and felt that it held up very well. I had been prepared for it by hearing the BBC radio play, No Ordinary Light, also about the life of Gandhi, by Hallam Tennyson and starrting Sam Dastor; I was sad to learn that the play has been lost from the BBC's archives.

For once, I'm going to have to limit my comparison of actors who appear in Gandhi as well as in earlier Oscar-winning or Hugo-winning films, let alone Doctor Who; there are just so many of them. Basically every moderately well-known British actor aged between 40 and 70 seems to have been transported to India to play one or other clueless imperialist. Three have reappeared from last year's Chariots of Fire - John Gielgud, Ian Charleson and Richard Griffiths. Three also appeared in the only other Oscar-winning film set (partly) in India, Around the World in Eighty Days - Gielgud again, Trevor Howard and John Mills (though all three are only in the London bits of the earlier film).

No fewer than nineteen of the cast also appeared in Doctor Who, chronologically from Ron Howard, an extra in a crowd scene here and also in The Ark (1966), to Colin Farrell who plays a clerk here and was in this year's Who story Orphan 55. Shane Rimmer was in Doctor Who and Dr Strangelove. John Savident was in Doctor Who and A Clockwork Orange. Jack McKenzie and John Ratzenberger were in The Empire Strikes Back. John Boxer was in Bridge on the River Kwai.

So for my photo comparisons this time, I'm going to switch fandoms to Secret Army. Bernard Hepton, star of the show as Albert Foiret, turns up here as the GOC, and Terrence Hardiman, who plays doomed Luftwaffe Major Reinhardt in the third series, makes a brief appearance here as Ramsay MacDonald. 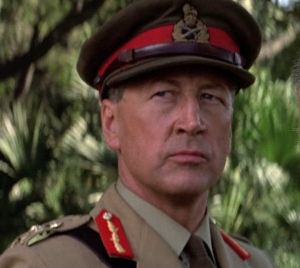 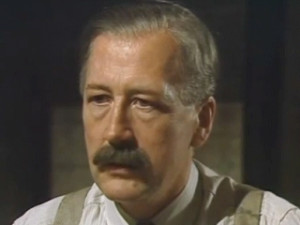 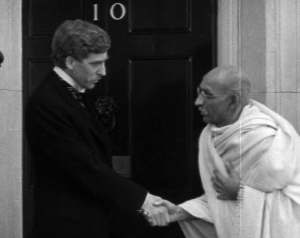 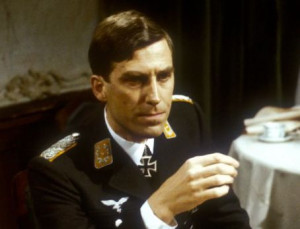 Well. This is a film about a famous man, and the women get a look-in only in so far as they are important in his life; plus it has to be said that while the real-life Gandhi was very firm for his time on the emancipation of women, the film is rather less so. It easily clears the first leg of the Bechdel test, but I am not sure that we ever see two named women having a conversation, and if they do I am sure that it's about the central character. Rohini Hattangadi, aged 27, is tremendously convincing as Kasturba Gandhi from young mother to old age, but doesn't get a lot to say.

However, it's undeniable that just four years after the unapologetically racist The Deer Hunter won the Oscar for Best Picture, here we have a film which is unambiguously about racism, oppression, and the ultimate defeat of white supremacy. I guess that many viewers were able to explain it away as a movie about things happening to other people in other countries. For myself, watching it in Belfast in 1982, there were strong local resonances: discriminatory legislation, hunger strikes, British soldiers firing indiscriminately into a crowd. (Also, Lord Mountbatten.) The Amritsar sequence is possibly the most effective seven minutes of the film.
The film generally looks brilliant. With the full support of both Columbia Pictures and the Indian government, one should hope so too. The 300,000 extras in the funeral scene are the largest number ever assembled for a film.
And it's a convincing portrait of a remarkable man. It errs of course on the side of Gandhi's saintliness (more on that below), and cannot conceal the fact that having spearheaded the cause of Indian independence, he was left behind by political developments on the ground; his answer to tensions between Hindus and Muslims was to refuse to eat until they stopped fighting, which did not work as a long-term solution. Still, he was much more often right than wrong. Ben Kingsley (born Krishna Pandit Bhanji) truly inhabits the role; occasionally you can see Ben Kingsley looking at you out of Gandhi's face, rather than the other way round, if you see what I mean.
Anyway. The film is a bit hagiographic, and a bit long, and a bit male, so even though it looks great and its heart is (mostly) in the right place, I'm not putting it right at the top of my list but about a fifth of the way down, between West Side Story and The Best Years of Our Lives.

Next up: Return of the Jedi and Terms of Endearment, in that order.

The Oscar for Best Original Screenplay was not completely fairly awarded this year, as the screenplay was not particularly original. The film is pretty strongly based on Louis Fischer's 1950 biography of Gandhi, the second paragraph of whose third chapter is:

In an out-of-doors group picture of the 1890 Vegetarians' Conference at Portsmouth, Gandhi was wearing a white tie, hard white cuffs and a white dress handkerchief in his front pocket. His hair is neatly dressed. He used to spend ten minutes every morning combing and brushing it.

However, Fischer as a journalist does very well at explaining the situation of both South Africa and colonial India to the general reader, and making it clear just how important Gandhi was to the political developments of both. In particular, he stresses Gandhi's commitment to non-violence even more than the film does. And I think it's fair to say that without a Gandhi-like figure, India would certainly have become independent, probably somewhat sooner, but at a much greater cost of lives lost in conflict.

I was also interested to learn that Gandhi's family were always political - his grandfather served as prime minister of Porbandar, the small state where he was born, and his father was successively prime minister there and in three other states, Rajkot, Wandaner and Bikaner. The book does get a little unmoored at the end when Fischer appears in his own narrative and gives us verbatim notes of his (many, long) conversations with Gandhi, but in general I found it readable enough.

You can actually download a scanned PDF of Fischer's book from the Gandhi website, but it has a lot of misreading errors, and if I were you I would get it here.