8 October 1966: broadcast of first episode of The Tenth Planet. The Tardis lands at the South Pole and the Doctor, Ben and Polly are apprehended by the staff of the base; and the Cybermen arrive. 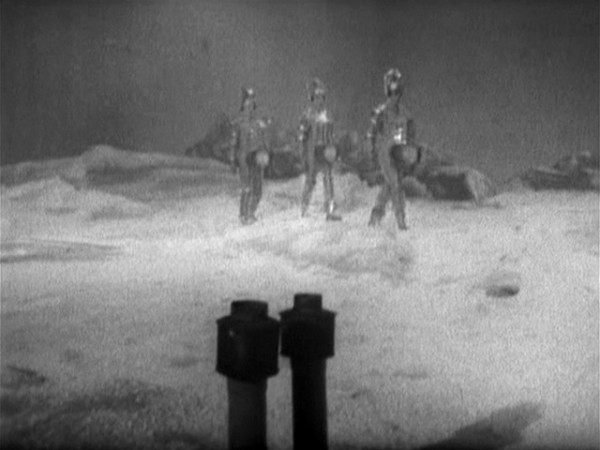 also 8 October 1966: the very first regeneration sequence was filmed, for broadcast three weeks later, as William Hartnell transformed into Patrick Troughton; Hartnell's last filming in the lead role just a day under three years since his first.
Lovingly reconstructed in 2013:

8 October 1977: broadcast of second episode of The Invisible Enemy. First appearance of K-9!!! The Doctor and Leela travel to the Bi-Al research centre in the asteroid belt, get themselves cloned, miniaturised and injected into the Doctor's brain. 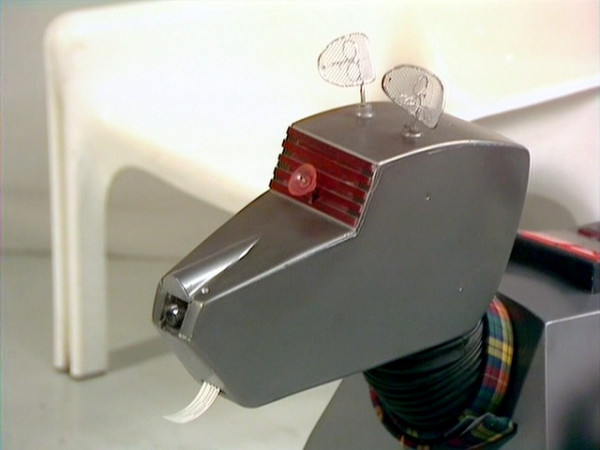 8 October 2007: broadcast of second episode of Eye of the Gorgon. Much running around with secret corridors and finally using a mirror to turn the Gorgon's power on itself, and transform Maria's father back to his usual self. 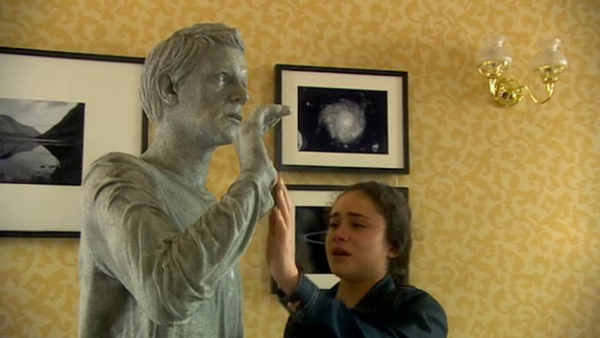 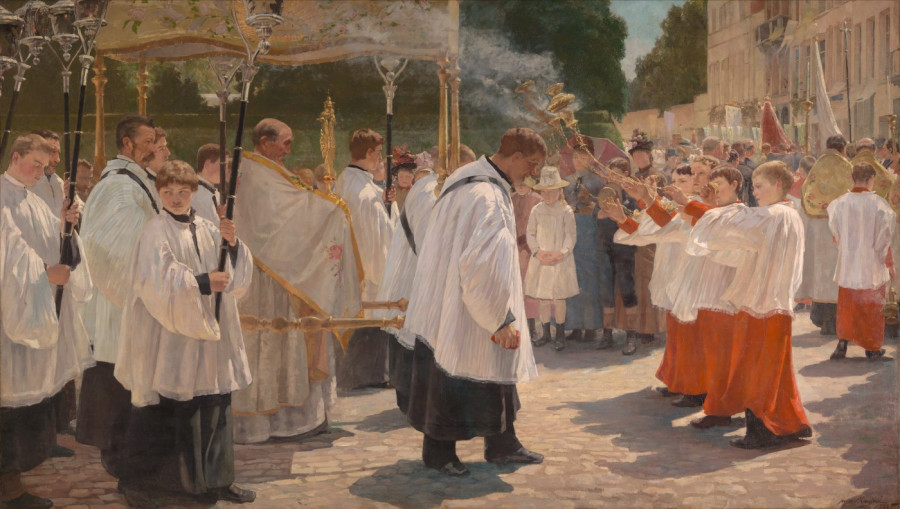 We went to the M Museum in Leuven at the weekend, and found a carefully pared down collection on display, concentrating more than usually on religiously inspired art. The piece that really caught my attention was this depiction of a sacramental procession in Brussels by Jean Mayné (1854-1924); gorgeous sunshine on the faithful, lots of movement captured by the artist, you can practically smell the incense, all on a huge canvas 4.3 metres long and 2.1 high. Mayné painted it while still a student, in 1878, at the Brussels Academy (where he graduated one place ahead of the now much better known James Ensor). He held onto it for 13 years, and sold it for 2000 francs (can't find exchange rates, but that must have been a tidy sum) to Leuven city council in 1891.

It's a lovely piece of work, and I wondered why the artist is not better known. Neither English nor French Wikipedia has a page about him; Dutch Wikipedia does, but lists none of his works (it mentions that he was one of the contributors to the massive Panorama of Cairo, mainly attributed to Émile Wauters, now scandalously lost). It mentions that his work can also be found in the municipal museum of Ixelles, in Etterbeek town hall, and in the church of St Boniface which is across the square from one of my favourite Thai restaurants. I'll have a look next time I'm down that way.

Looking around, a lot of his work that comes on the market seems to be wistful women of various ages. Perhaps that's where the money was. None of these seems to me to catch the energy of the "Sacramental Procession". 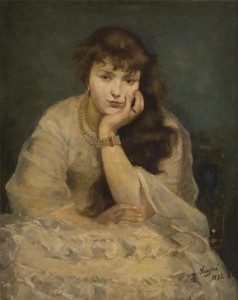 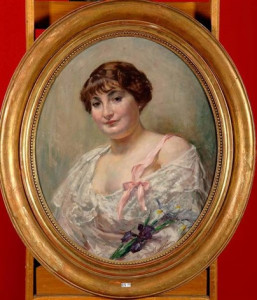 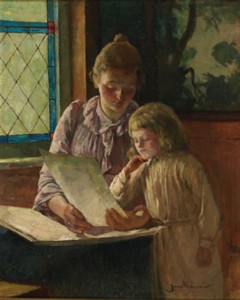 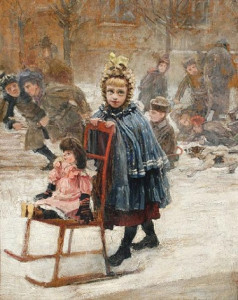 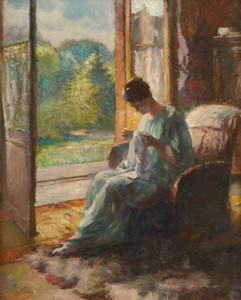 His landscapes and townscapes are not a lot better, though I do like the "Blessing of the Sea" which catches some of the spirit of the earlier procession. 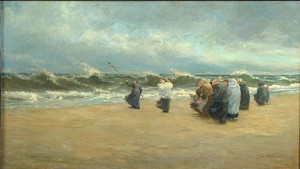 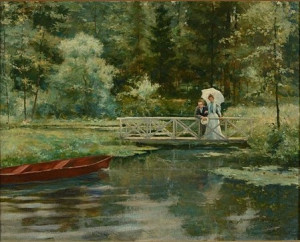 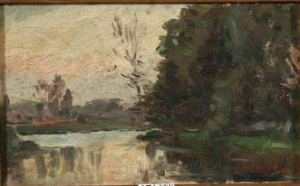 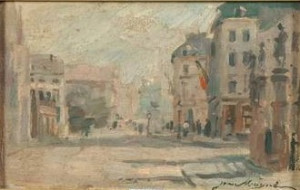 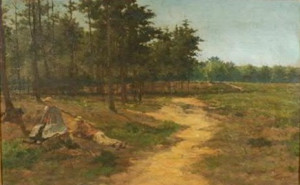 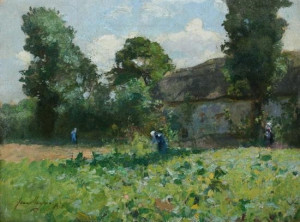 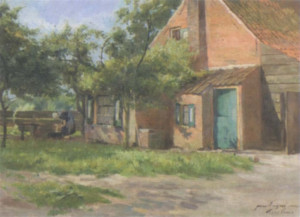 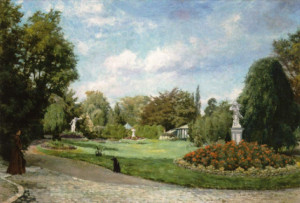 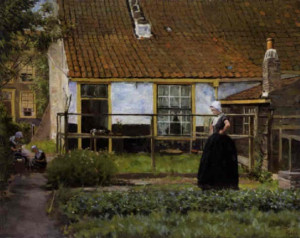 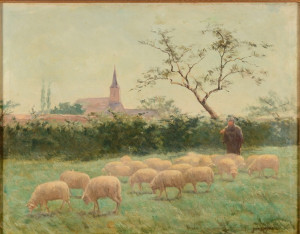 But it's really his urban scenes with people in them which have the most life. Apart from the procession where we started, three of his other paintings grabbed me: "Dressmaker with Children and Dolls", "The Ball" from 1903 and best of all "The Big Snowball", also fronm 1903, in which you can practically hear the little boys swearing. Some of their fathers and uncles may have been in the "Sacramental Procession", 25 years before. 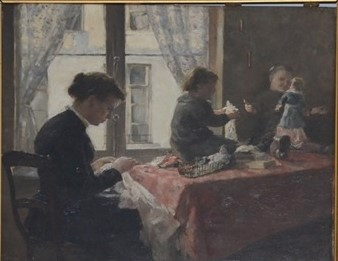 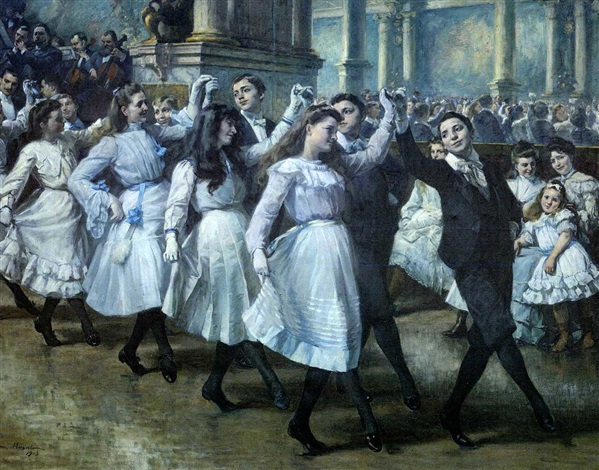 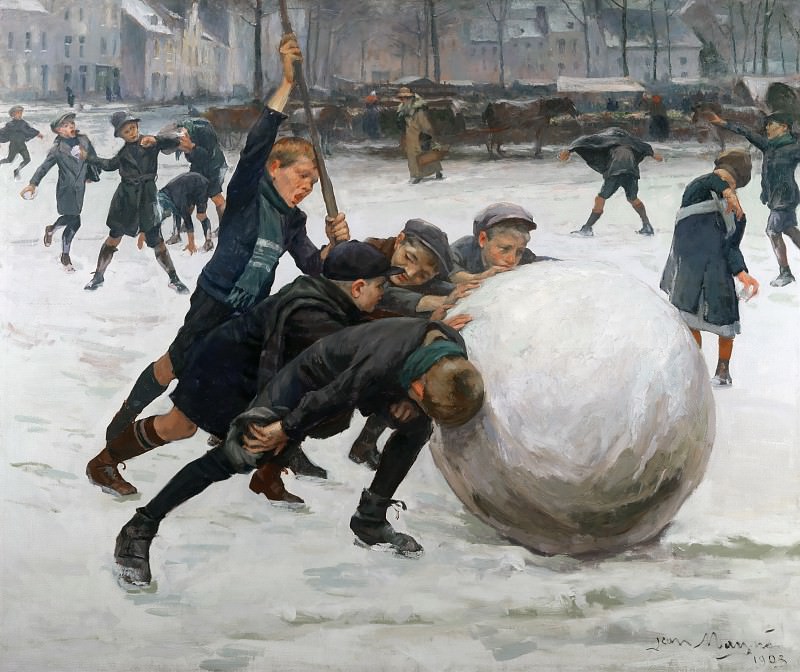 I can see why he hung onto the "Sacramental Procession" until 1891; he must have known that it was one of his best works, and been sorry to part with it. But Leuven city council made a smart choice.

His daughter Berthe Flaminé Mayné became an artist too. A woman with almost the same name, Berthe Antonine Mayné, romantically set off to Canada with her rich lover in 1912 and survived the sinking of Titanic, but I am sure that they are different people. Berthe Flaminé Mayné seems to have specialised in painting women, who generally have more character than her father's. I have not found much else out about her, except that her husband was called Adhémar Flaminé and their war-time passports survive. 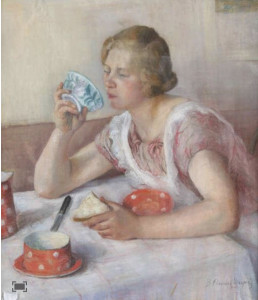 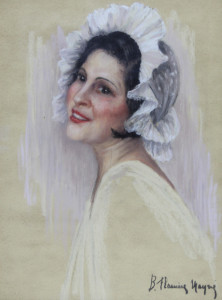 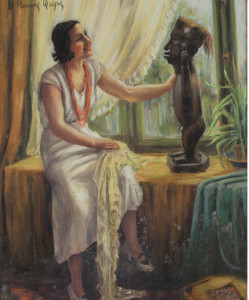 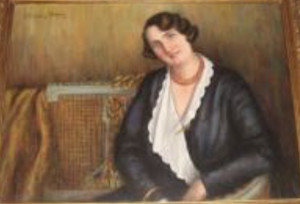 Current
Titus Groan, by Mervyn Peake
Complexity: The Emerging Science at the Edge of Order and Chaos, by M. Mitchell Waldrop
Helen Waddell, by Felicitas Corrigan

Next books
This Must be the Place, by Maggie O'Farrell
The Tropic of Serpents, by Marie Brennan
Collapse