23 August 1991: death of Innes Lloyd, producer of Doctor Who from The Celestial Toymaker to The Enemy of the World, who overhauled the show by getting rid of all the regular cast including the star, thus ensuring its long-term survival.

23 August 2002: Webcast of episode 4 of Real Time. Evelyn is faced with becoming a Cyberman; the Doctor confronts the bloke played by Yee Jee Tso and discovers why his acting is so bad why he is not completely human. 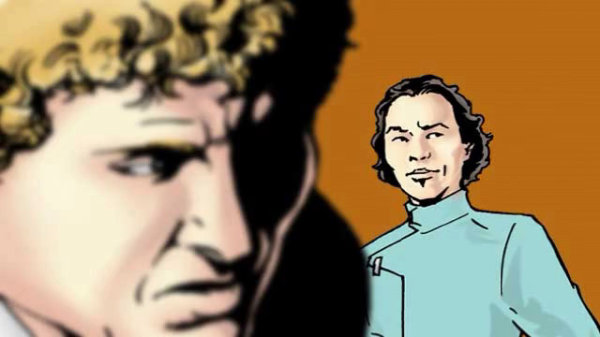 23 August 2014: broadcast of Deep Breath, the Twelfth Doctor's first full story. The new Doctor arrives in Victorian London. There are dinosaurs, spntaneous combustions, clockwork men and the Paternoster Gang. And Clara gets a phone call from the old Doctor. (This is the earliest autumn opening of a season in New Who, and the second earliest autumn opening ever.) 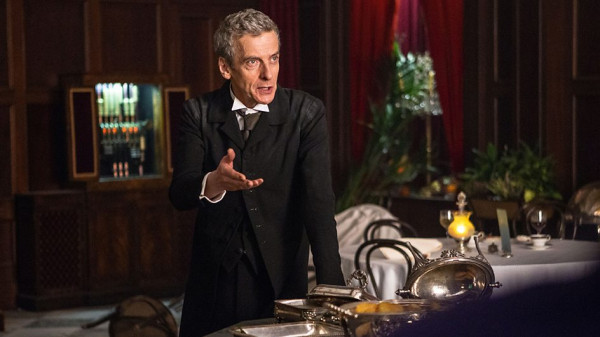 I plucked up courage yesterday to visit the exhibition of Paul Delvaux works, "The Man Who Loved Trains", at Train World in Schaarbeek (which I had previously visited three years ago for a Tintin exhibition). I brought little U with me - she is usually up for an expedition somewhere new ("Would you like to come with Daddy in the car?"). Of course, in the times we are in, we both had to wear masks, and U will submit to this indignity even though she has no idea why. I should add that the two of us got in for the price of one, because I counted as her assistant. 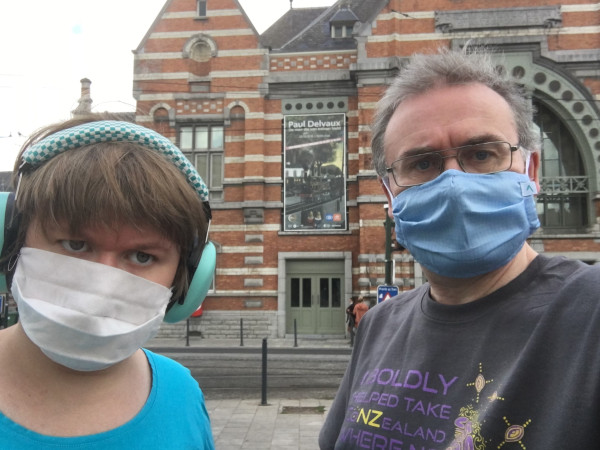 Delvaux was not much more than a name to me before yesterday, but the exhibition grabbed me immediately with his early studies of the Gare du Luxembourg in Brussels from 1922, the year he turned 25. Most days when I go to the office by train, I arrive there, and some days I leave from there as well. The streetscape has changed very much in the last 98 years, but the contours of the old structures are still discernible if you look for them with the eye of faith. I found it fascinating. Delvaux was given access to parts of the station that were and are normally closed to non-railway workers, so it's a vantage point in both time and space that is inaccessible to me. 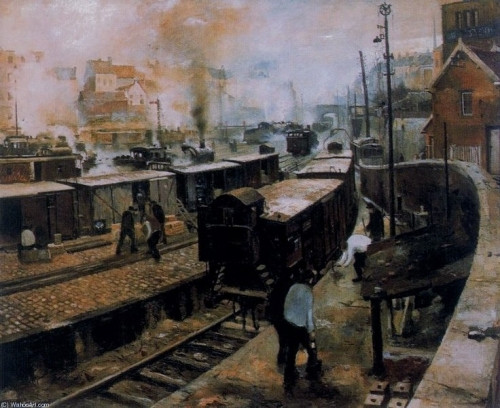 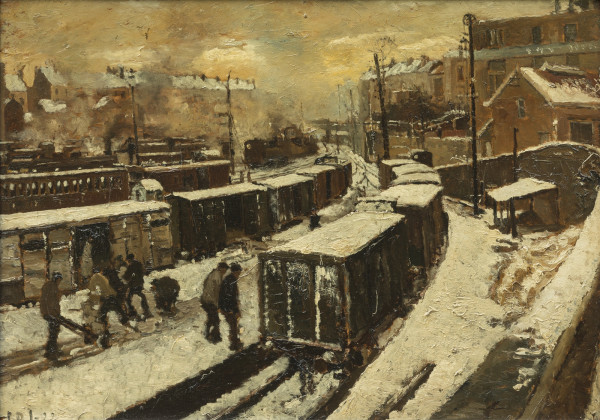 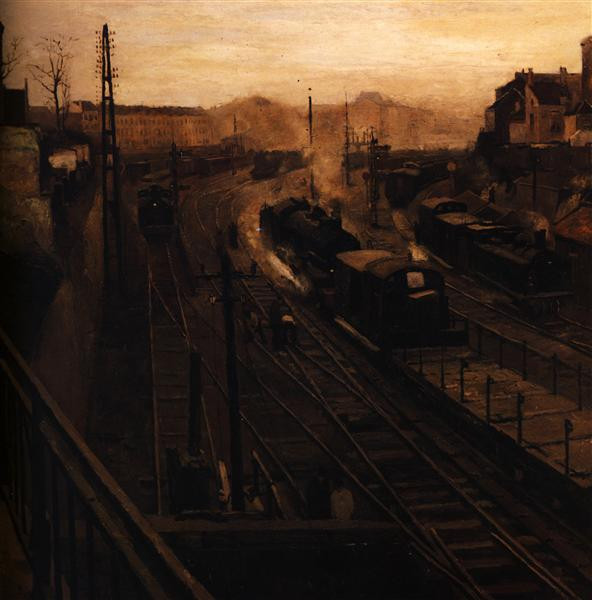 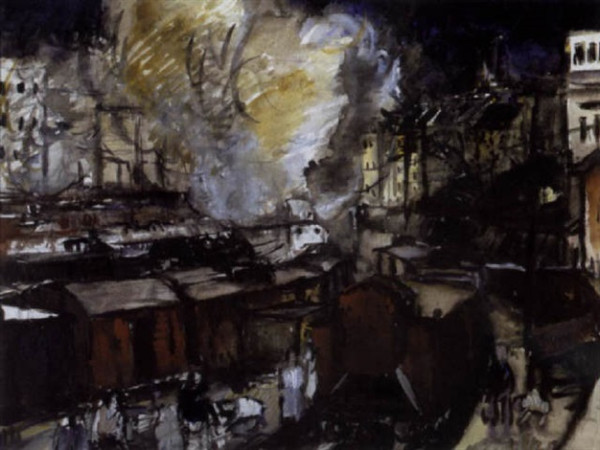 On reflection, I guess I am not the only potential visitor who knows that part of town well, so it's a good strategic hook to get people like me interested. If that doesn't work for you, the next picture, "The Three Lamps", has the first of many topless or nude women hanging around near trains or railway stations, and the first of many mysterious children with their backs turned to us. 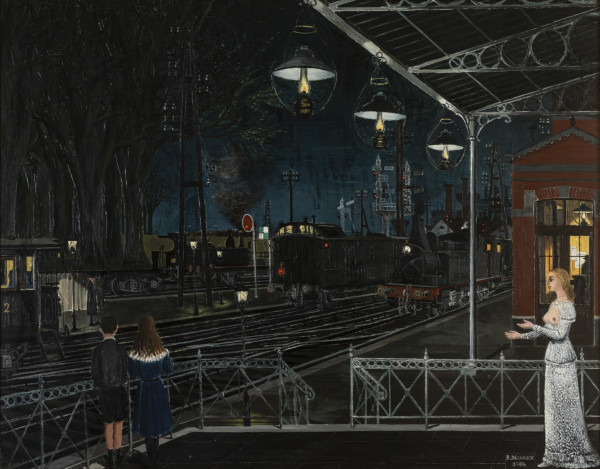 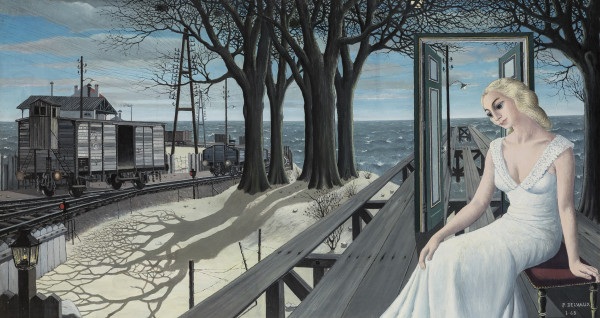 One piece that jumped out at me for its sfnal connection is "Homage to Jules Verne", also unusual in that one of the nudes is male. 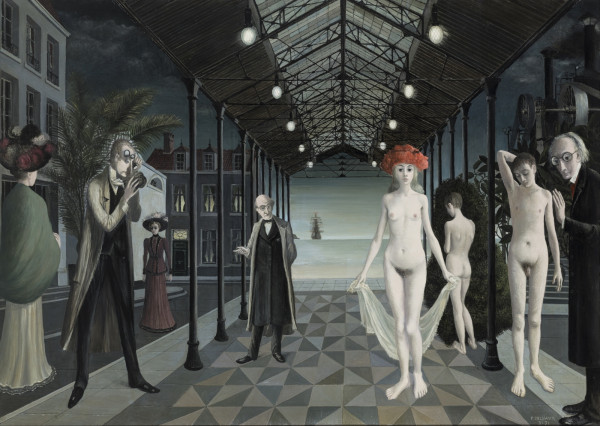 Delvaux got some major commissions including from the Belgian state railway company SNCB/NMBS. These four panels, the first two called "Day Train" and the second two "Night Train", were painted to adorn the new international sleeper trains introduced in the early 1960s. I found them striking. 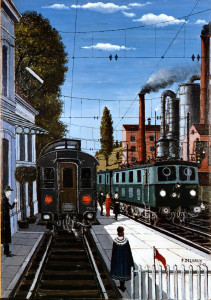 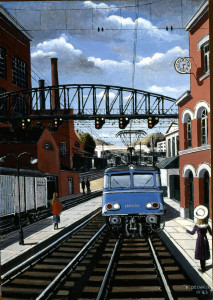 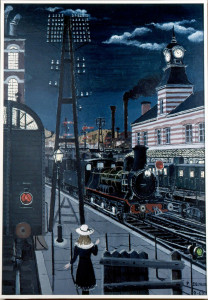 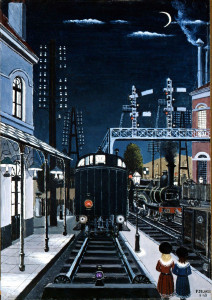 One of these was later used for a Belgian postage stamp.

Apart from the paintings there are the usual exhibits of historical train stuff, to which access is limited at present. 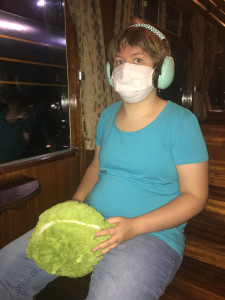 The exhibition is open until 10 October, so if you're in this part of the world, it's well worth a look.
Collapse