21st August 1572: Admiral de Coligny is shot and wounded; the Abbot of Amboise, suspected of being an impostor who has derailed the assassination plans, is killed by his own allies; Steven (who is fresh from the mayhem of The Daleks' Master Plan) thinks it is the Doctor who has been slain. (as shown in The Massacre, 1966 - I used this picture for Andre Morell's birthday yesterday, but I think it's from this episode so I'll use it again.) 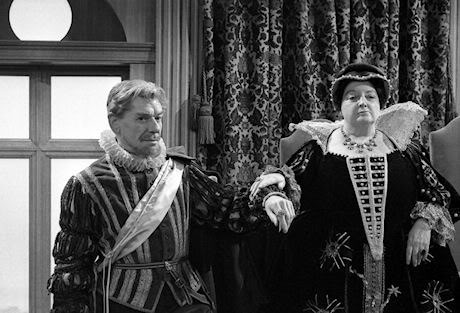 I'm glad to say that after some effort we have managed to find homes for all of the 1945 Retro Hugos. The trophies themselves are currently in New Zealand and will be shipped en bloc to the USA, where our dedicated (and unpaid) team will ship them to the recipients (all of whom are in the lower 48).

As with last year (which I wrote up here), some of these were easier than others, and we've made some judgement calls.

The easiest were the three winners who also won last year - John W. Campbell, Ray Bradbury and Fritz Leiber. Campbell's grandson and Jason Aukerman of the Center for Ray Bradbury Studies at Indiana University accepted their trophies, for Best Editor, Short Form and Best Short Story respectively; Leiber's, for Best Fan Writer, will go to the Special Collections of the University of Houston Libraries, on the instructions of the agent for his estate.

The Best Fanzine trophy for Voice of the Imagi-Nation, edited by Forrest J. Ackerman and Myrtle R. Douglas, will go to Ackerman's trustee Kevin Burns of Prometheus Entertainment., who accepted Ackerman's trophy last year. We were unable to identify any competing claimant from Douglas's side.

The award for Best Novelette will go to Clifford D. Simak's literary executor in Minnesota, who we tracked down through mutual contacts.

The award for Best Novella will go to another university library, the Special Collections of the Spencer Research Library at the University of Kansas, after liaison with Theodore Sturgeon's daughter.

We discovered that a correction was needed for the citation for Best Graphic Story or Comic - although the publication of “The Mysterious Mr. Mxyztplk”, is credited to Jerry Siegel and Joe Shuster, it seems that the art was actually by Ira Yarbrough. We tracked down Siegel's daughter, and the trophy will go to her in Nevada.

For Leigh Brackett, who won both Best Novel and Best Related Work, it took some time to track down the agents for her estate (who firmly and accurately declare on their website that they will not reply to emails), but we got there in the end and will send the trophies to Brackett's heir in California.

Margaret Brundage, the winner of the Best Professional Artist award, outlived her only child and appears to have no heirs. We were contacted by possibly her biggest living fan, who has promoted her work vigorously, and since he asked nicely and there was no competing claim, we are sending the trophy to him in Texas.

As usual, the two Dramatic Presentation awards presented a challenge. (We had thought we would at least halve the hassle when the low turnout at nominations phase meant that we had to cut the two categories down to one, but the voters had other ideas and provided us with a tied result in the Short Form category that we did run.)

For The Curse of the Cat People, writer DeWitt Bodeen left no family that we could trace. Movie lore suggests however that the producer, Val Lewton, also did a fair bit of the writing, and we were able to trace his daughter-in-law to Washington DC; so she will get that trophy.

For The Canterville Ghost, the trail at first seemed equally cold, and we were seriously thinking of contacting the estate of Oscar Wilde, whose story the film was based on. But it turns out that the daughter of screenwriter Edwin Harvey Blum, herself the author of Coming of Age: The Sexual Awakening of Margaret Mead, still lives in her father's house in California, so the trophy will go there.

Somewhat surprisingly, the most difficult trophy to bestow was that for Best Series, which went to the Cthulhu Mythos, by H.P. Lovecraft, August Derleth and others. We were contacted by an ambitious individual who felt that they had a claim to the trophy because they had recently translated a Cthulhu mythos story into English from the language it had first been written in. Er, no. The award is for work done to the end of 1944, and no later.

Our first stop was Arkham House, who were frankly very slow to respond to messages. (In fairness to Robert Weinberg, who is still described as the person in charge on the H.P. Lovecraft Wiki, he can be excused for not replying quickly because he died in 2016.) We therefore turned out attention to the Special Collections of Brown University, who hold Lovecraft's papers, but they too did not respond. (It's August.)

Earlier today we finally heard back from one of August Derleth's grandchildren at Arkham House, and that has closed the loop. Given that the Cthulhu Mythos would not have been eligible for a 1945 Retro Hugo without Derleth's work, and considering the massive efforts made by Derleth and Arkham House over the years to promote Lovecraft's work, it feels appropriate that the rocket should end up in Wisconsin, even if it is a fair step from Providence.

Edited to add: The library at Brown did eventually respond, declining the trophy.

In the meantime, the Memphis bid for the 2023 Worldcon has created a bit of a stir by declaring that they will not run the Retro Hugos if they win. (Next year's Worldcon, DisCon III in Washington DC, cannot run the awards because they have already been done for 1946. Chicon 8, the 2022 Worldcon, have yet to make a statement.) This year's Retros were not without controversy - Cora Buhlert has a very good roundup of commentary.

The diversion of resources for the Retro Hugos is significant. Eligibility checking and attempts to locate the finalists’ heirs are inevitably more time-consuming than the same processes for the current year, as I hope is clear from the above (and my previous post). They need trophies and separate bases, which cost money. They need time carved out of the convention for a ceremony to announce the awards, which no winner will actually be present to receive. Efforts need to be made to educate voters about what there is to vote for. A lot of people put effort into such education this year, and some of them feel that those efforts are not really reflected in voter choices.

I find the low level of participation at nominations stage particularly significant. A lot of people will happily cast a vote if you give them a choice of options; the number actually willing to do the research and make some nominations of their own is really quite small, and not growing.

Some winners are being awarded trophies with a very low number of votes. It’s legitimate to ask if the results are actually meaningful enough to deserve the recognition that we are giving them.

Almost everything that Worldcon does is optional and needs to be subjected to a cost-benefit analysis (the exceptions are administering the Hugo Awards, running the Business Meeting and Site Selection – even the regular Hugo ceremony is optional). Any Worldcon must look at its available resources and say, well, if we do this thing, we will make a certain number of people happy at a cost; is the cost worth it? And the cost includes, but is far from limited to, the number of other people who will be made unhappy by doing that thing.

I really cannot blame the Memphis bid for making the decision that they have, as early as they have. As a matter of fact, the 2020 Hugo Admin team advised against running the Retro Hugos this year, but the chairs of CoNZealand decided otherwise. But that's another matter.
Collapse