This was the topic of a marital conversation yesterday: which books of the Bible would pass the famous Bechdel test? The test itself originates from a conversation between two characters in Alison Bechdel's famous comic Dykes to Watch Out For, about films: 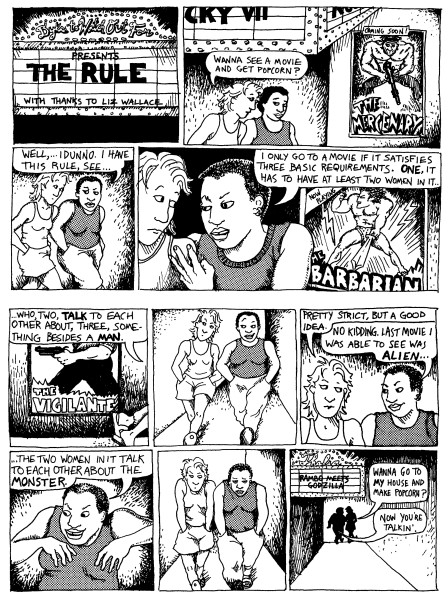 Over the years it has acquired a minor additional tweak: a book or film etc passes the test if:

Obviously the Bible was not made for the Bechdel test, or vice versa. But it is an interesting exercise to apply the one to the other, and see what comes up. Pro-Bible commentators claim that there are four books of the Bible that actually pass it; in my view only one of these is sound. That one is:

However, there are another three cases where it is argued (in my view wrongly) that the Bechdel test is passed. They are:

Reasonable people can disagree about all of this. The Bechdel test is not itself gospel, it's just a useful indicator of the extent to which a writer is treating women as people rather than romantic adjuncts to the men in the story. Large chunks of the Bible are not narrative in form and the Bechdel test cannot be reasonably applied. If the Book of Ruth passes, the Bible as a whole passes.

And yet, even on the optimistic viewpoint that all four of the above passages do pass the Bechdel test, that still leaves vast chunks of the Bible where women's voices are simply not heard. (See a book-by-book analysis here.)
Collapse