When I first did these posts in 2010-11, I skipped this date because I could not find anything relevant. There still isn't much, but there's more than nothing.

13 August 2017: death of Victor Pemberton, the first person to have both written a Doctor Who story and also acted in one. He was also script editor of the show in 1967. He wrote Fury from the Deep (Second Doctor, 1968) and Doctor Who and the Pescatons (Fourth Doctor audio, 1976), and appeared as the minor character Jules Faure, a crewman who gets converted into a Cyberman, in The Moonbase (Second Doctor, 1967). 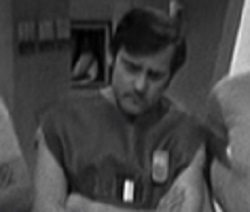 This is really clutching at straws. On 13 August 1945, Daniel O'Kane kills most of his family, as later recounted by his surviving brother to his long-lost son (see pic below) in P.R.O.B.E.: The Zero Imperative, which stars Caroline John as Liz Shaw and some other Whoniverse actors in other roles. The specific mention of 13 August is at the 48 minute mark. (Audio here is not very good but you can probably get a better copy easily enough.) 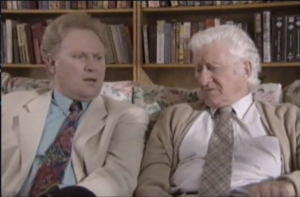 Current
Wolf Hall, by Hilary Mantel
The Maze of Doom, by David Solomons
Jerusalem: Mansoul, by Alan Moore
One Flew Over the Cuckoo's Nest, by Ken Kesey

Next books
The Mirror and the Light, by Hilary Mantel
East West Street, by Philippe Sands
Collapse