Eliot's journals also tell us a great deal about the everyday cultural lives of well-off, educated Victorians, the vital centres of Victorian high culture, the social networks in which it was produced, and the close relationship between cultural production and Victorian society. Eliot attends a performance of a Handel oratorio with a stalwart of the artistic establishment (Frederic Burton s portrait of Eliot was exhibited at the Royal Academy in 1867). She views neoclassical paintings by Frederic Leighton (who had illustrated Romola) in a studio in Kensington fitted out to resemble a Turkish palace. She accompanies the architect Owen Jones (who designed the interior of the Crystal Palace for the Great Exhibition, and the interior of the Leweses' new house, The Priory) to a show of archetypal English daily-life scenes by an Irish-born painter, William Mulready, showing in a museum founded by Prince Albert (whose idea the Great Exhibition was) and devoted to the celebration of Victorian industrial and cultural progress. While there they also visit the India Courts, interior spaces that, like Leighton's studio, replicate the architectural forms of Greater Britain (Jones, whose Grammar of Ornament (1856) incorporated design motifs from around the world, was the leading orientalist and functionalist among Victorian theorists of architecture and design). And like others of their class, they entertain, and they travel. She and Lewes take a short trip to Scotland—travelling first class on the train, no doubt—and Lewes retires into the countryside for a week or so before they regroup to spend the remainder of spring in Italy, where it was cheap, and where so many culturally acquisitive Victorians made their version of the Grand Tour, the cultural journey through Europe taken by generations of the wealthy English.

Good short readable survey of Eliot's life, work and influences, with chapters on politics, gender, religion and science. The last chapter looks at film and TV adaptations, concentrating on the 1994 BBC dramatisation (which maybe I should have a look at; Rosamund is played by my twin Trevyn McDowell). Am still not convinced that The Mill on the Floss is any good, but I might give Romola and Felix Holt a try (Middlemarch is in my medium-term plan anyway). You can get it here.

This was my top unread book acquired in 2013. Next on that pile is Felicitas Corrigan's biography of Helen Waddell. 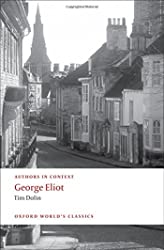