This was another day that I skipped first time round, probably because I was feeling ill and short in Uganda. But there is plenty to say.

Little U has developed a habit of watching my Doctor Who DVDs - I have no idea what she makes of them, but I am glad to share an interest with her. The other day she picked up my copy of The Moonbase, and I realised that I had not actually watched it myself, as it was still in the plastic wrapping. Oddly enough I had been looking at the story anyway in a slightly random quest for references to Glasgow in Doctor Who:
https://vc.videos.livejournal.com/index/player?player=new&record_id=1469571
When I first watched The Moonbase in 2006, I wrote:

The Moonbase was a four-part series broadcast just before I was born in 1967. It is set entirely on the Moon, at a base from which the world's weather is controlled; the Doctor and his three companions (Ben and Polly from 1966 and eighteenth-century Jamie) arrive in time to avert the conquest of Earth by the Cybermen their second appearance after The Tenth Planet. It's not easy to watch, because episodes 1 and 3 are lost; in the end I played the soundtrack off my Lost In Time DVD while flicking through the BBC photonovel, and then watched episodes 2 and 4 directly.

I have to differ with the fannish consensus that this is better than the Cybermen's previous outing. I found the Cybermen more difficult to understand, the plot implausible even making allowances for scientific hand-waving - the base commander ought to have been shot for his attitude to security - and the direction seems to consit of lots of actors standing around waiting to say their next line.

On the other hand, the look of the sets is pretty good; two years before Armstrong and Aldrin, they do a decent lunar landscape and setting. The incidental music is great. And Troughton is brilliant, though Ben is annoying, Jamie comatose for much of the story, and Polly is repeatedly patronised - noticeably the only female character, told to go and make the coffee, told she can't take part in the final attack as it is "men's work". I don't find myself especially mourning the two missing episodes.

When I rewatched it in 2010 (probably using the Loose Cannon recons of Episode 1 and Episode 3; can't remember for sure), I wrote:

Well, it's The Moonbase and the Cybermen are back. Only four stories on from The Tenth Planet, but we have essentially the same plot, with no women at all bar Polly (who saves the day by thinking of nail varnish remover) and only one non-white character who gets killed off in his first scene. We also lose the Cybermen's own motivation, which was incoherent but at least sincere in The Tenth Planet; here they just want to eliminate humanity and take over the world, because they are Bad. (Random note: this is the fourth Second Doctor story, but the first in which he does not pretend to be someone else; identity settling down at last?)

The one thing I will say in favour is that the Radiophonic workshop music is very good - when I heard the lunar surface theme, I checked to see if the BBC had ripped off the Ligeti Kyrie from 2001: A Space Odyssey (and they hadn't; the film came out a year after this story was shown). The dénouement of the Cybermen being levitated off the Moon is also better than I had remembered, and the whole realisation of the lunar surface is rather effective. But it's rather a poor relation of The Tenth Planet.

I should also cite my brother's take:I have to accommodate myself now to the fact that the new-ish DVD with animated versions of the missing episodes 1 and 3 is going to be the canonical version of the story for the foreseeable future. Which is fine - it's a good effort, and we have half of the original story surviving to give us a sense of what the rest should have looked like. It's a lot better than nothing, and I think that the animators have done a very good job here of evoking the original sets, but I still find the Loose Cannon versions more evocative of the original viewing experience. In particular we lose out on the dynamics of group scenes; there is more expression in this still from towards the end of Episode 3 than in the animation's attempt to reconstruct half of the crowd. 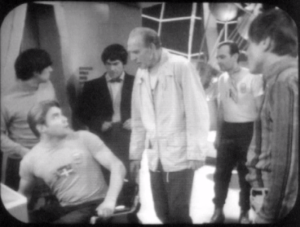 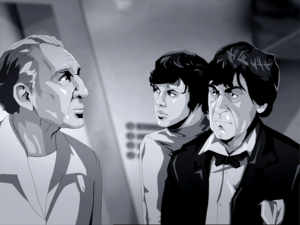 I must admit that there are one or two brilliant moments, in particular the Cybermen's march on the base in the third episode:I must also admit that the previous two times I had watched the story, it was not very long since I had also seen The Tenth Planet. Outside that context, it comes over rather better. And it's interesting to hear Anneke Wills insisiting that her role was actually intended to be somewhat feminist - I can see what she means, though I don't think the writers really got there.

As is my wont, I went back and reread the novelisation of the story, Doctor Who and the Cybermen, by Gerry Davis. When I first reviewed it in 2008, I wrote:

A relatively early novelisation here, but not an especially good one. Davis' characterisation is poor (Jamie is thick; Polly is a girlie; the head of the Moonbase is from Yorkshire) and the science of the story still makes no sense. Davis' style must have improved over the years - this and Doctor Who and the Tenth Planet are markedly inferior to Doctor Who - The Highlanders.

The first half of the large room was dominated by a flat, illuminated projection of the world. As in a conventional atlas, the continents were picked out in green and the oceans in blue. Over the top of this projection a grid of ruled red lines and figures had been traced. A number of flat, transparent indicators or cursors were in constant motion across it. They were directed by operators who sat by a console underneath the screen.

It was in fact only the second Second Doctor novelisation to be published, after Terrance Dicks' Doctor Who and the Abominable Snowmen (which is better) but crucially before Doctor Who and the Tenth Planet (which is not). Having only just watched the story, I twitched at a couple of differences. One of them is in the conversation about Lister from the first clip above:

‘Just a minute.’ Polly was beside him, her face looking a little anxious. ‘Are you really a medical doctor?’
The Doctor stopped, thought for a moment, and then brought out his inevitable diary. ‘Yes. I think I did take a medical degree once.’ He opened an early page in the diary and looked. ‘There it is; Edinburgh, 1870! What’s this...’ He looked closely at the entry. ‘... Lister... Mmm...’ He closed the diary, thrust it back into his pocket and turned to the patient.

Lister left Glasgow for Edinburgh in 1869, and remained there for the rest of his career. Between the 1967 broadcast and the 1975 novelisation, someone must have pointed out to Gerry Davis that it would have been impossible for the Doctor to study under Lister in Glasgow in 1888.

Another difference is in the account of the origin of the Cybermen, a desperate attempt to restore continuity with The Tenth Planet (though it's puzzling that Davis thought readers of 1975 would care more about this than viewers in 1967):

Benoit sat down on the edge of the console, his cool self again. ‘But the history books say you were all killed when your planet, MONDAS, exploded in 1986.’
The first Cyberman had moved to a position where he could watch the activity in the Gravitron room. He now turned round to answer Benoit. ‘We were the first space travellers from MONDAS. We left before it was destroyed. We have come from the other Cyberman planet, TELOS.’
The Doctor broke in, ‘Then you know how MONDAS was destroyed?’
The first Cyberman looked at him. ‘Yes, and we know what part you played in that. We have returned to take the power you used to destroy MONDAS.’

This represents one line of the TV script where Benoit says "But you were all killed!"

One of the great Doctor Who lines comes in Episode 2, so fortunately the video survives. Here it is:In Davis' novelisation, this becomes:

The Doctor had, as Polly put it afterwards, a ‘far horizons’ look in his blue-green eyes. ‘There are some corners of the universe,’ the Doctor went on, ‘which have bred the most terrible things. Things which are against everything we have ever believed in. They...’ he shivered in spite of himself, ‘... must be fought. To the death.’

Do those extra three words at the end add, or take away?

Anyway, this is not my favourite Second Doctor story, but I will go back to it and watch with the commentary next time. And the book is easily digestible.

You can get the DVD here and the book here. 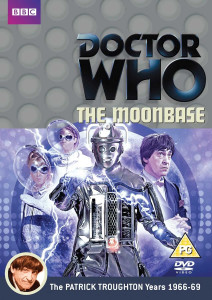 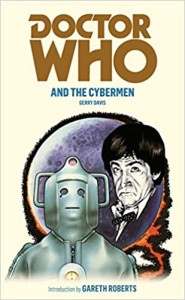