February 2007 was the historic month that I joined Facebook. The travel highlight was a trip to the USA, taking in New York and Washington DC as usual, and finishing in very snowy Rockport, Maine, where I spoke at the annual Camden Conference:
Also more Doctor Who fan art from young F, this time a crossover with Spongebob - what if he partly changed his house into the Tardis? Transatlantic travel and uninterrupted commuting by train allowed me to read quite a lot of books:

Non-fiction 9 (YTD 16)
A Soldier in Time: The Nicholas Courtney Memoirs, by Nicholas Courtney
About Time: The Unauthorised Guide to Doctor Who, 1966-1969, by Tat Wood and Lawrence Miles
Endgame in the Balkans: Regime Change, European Style, by Elizabeth Pond
The Three Yugoslavias, by Sabrina P. Ramet
Why Don't Penguins' Feet Freeze? And 114 Other Questions, edited by Mick O'Hare
James Tiptree, Jr.: The Double Life of Alice B. Sheldon, by Julie Phillips
The Iraq Study Group Report, co-chairs James A. Baker III and Lee H. Hamilton, Executive Director Daniel Serwer
William Howard Taft: A Conservative's Conception of the Presidency, by Donald F. Anderson
1912: Wilson, Roosevelt, Taft and Debs - the Election That Changed the Country, by James Chace

Non-genre 2 (YTD 6)
The Catcher in the Rye, by J.D. Salinger
Murder at the Worldcon, by J.D. Crayne

Doctor Who 4 (YTD 5)
Salvation, by Steve Lyons
Bunker Soldiers, by Martin Day
The Man in the Velvet Mask, by Daniel O'Mahony
Who Killed Kennedy?, by James Stevens and David Bishop

Patricia Kiernan didn’t say it because she thought anyone was listening; people didn’t listen to Patricia, as a rule.

Wow. This really is lazy stuff. The latest Doctor Who Annual consists of two extracts from books that I already had, with summaries of each story from Series 11 (or 37), the Thirteenth Doctor's first series, as filler in between; and that's basically it. Even less thought has been put into this year's annual than last year's, and not surprisingly none of the editorial team wants to be credited by name. I have occasionally commented that this book or that play is really only for completists; I'm not sure I could even go that far with the 2020 Annual. What a disappointment. You can get it here if you really want. 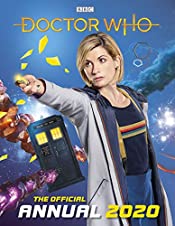