In 2010-11, I did a series of daily posts on anniversaries in Doctor Who history, covering i) real-world anniversaries of the births and deaths of people important to the history of the programme; ii) anniversaries of the first broadcast of Who stories on TV and radio (which get a bit thin over the summer, so we are starting gently); and iii) dates which are specified in broadcast stories or spinoff literature (of which there are surprisingly few). Ten years on, there is more material to work with, so let’s do it again.

As the lockdown eased, we sat down and watched the ten episodes of Picard, the latest in the Star Trek franchise, with 79-year-old Sir Patrick Stewart returning to his most iconic role. In case you don't know much about it, here's the official trailer:

I have actually seen only a very few episodes of Star Trek: The Next Generation, but it was enough to help me locate all of the returning characters in Picard. Our hero is moved to come out of retirement to right a historic wrong; Starfleet won't give him a ship, so he acquires one of his own with a motley crew, led by Michelle Hurd's Raffi Musiker, another one of Picard's former first officers who comes with baggage from their past. But old friends return as well. The ghost of Data haunts the entire story, Seven of Nine makes an appearance or three, and the emotional peak is in the seventh episode, "Nepenthe", where we are reunited with William Riker and Deanna Troi (I would be very surprised not to see that episode on the Hugo ballot next year). 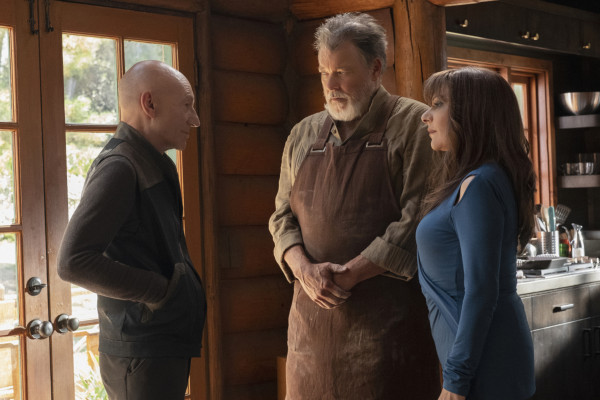 The core plotline is about the rights of synthetic life-forms in the Federation, and Isa Briones plays the cutest of a number of cute anthropomorphic robots. My wife reasonably chided me for enjoying the show despite my well-chronicled dislike of stories about cute anthropomorphic robots. I realise that actually I hate them much more in prose than on the screen, for whatever deep psychological reason. The Robots of Death is a great Doctor Who story, after all. But in any case, the synths in Picard are not funny metal machines trying to be human; they are a vulnerable minority who are being othered and whose rights are under attack, so it's a whole different trope being explored.

The pace is slow, but my concentration is not so good these days and I appreciated it. The one annoying glitch is that the showmakers forgot to give closure for the good-looking Romulan agent Narek in the final episode, which otherwise is also pretty good on the emotional intensity front. Well worth watching.

My four top tweets from the first half of this year:

4) Bitter commentary on the UK media.

Everyone, ignore the Mail on Sunday. I know it makes you angry. But channel your energy into something better. All you are doing is delivering them even more clicks that will further help their business model.

Wow, the courts just quashed the recommended new constituency boundaries for Northern Ireland. Doesn't matter in practice; they were never going to be implemented. But fairly dramatic stuff in terms of how the Boundary Commission should conduct itself. https://t.co/hFcAlNddUA

2) News of how the pandemic was hitting our own family:

Quarantine strikes close to home for us. The foundation where our two girls live told us today that we cannot visit them until 3 April (at least). Of course, I know that it's for the general good. But it hurts.

Last time all five of us were together was on Christmas Day. pic.twitter.com/kdseuiKNPU

And 1) commentary on the levelling effect of the pandemic: