Decades after the deaths of Mao and Chiang, it is possible not only to look at those two major figures with some perspective, but also to pay more attention to the context around them. There is an alternative to regarding the early 20th century as a clash of the two Chinese giants: instead we can treat the period from the establishment of Chiang’s Nationalist government in 1928 to the present day as one long modernizing project by two parties that agreed as well as disagreed. Both the Nationalists and the Communists wished to establish a strong centralized state, remove imperialist power from China, reduce rural poverty, maintain a one-party state, and create a powerful industrialized infrastructure in China. Both parties launched powerful campaigns against ‘superstition’, believing that ‘backward’ spiritual beliefs were preventing China from reaching modernity. The major ideological difference was that the Chinese Communist Party (CCP) believed that none of these goals, especially rural reform, was possible without major class warfare. The Nationalists opposed this, in part because it was captive to forces that opposed economic redistribution. This division led to a deadly falling-out by the mid-1920s, which was resolved only by the Communist victory in 1949. Ironically, though, by the end of the century, the CCP had also abandoned class war, although only after decades of factional, often highly destructive, conflict between classes.

Rana Mitter was a friend in Cambridge days, now Professor of the History and Politics of Modern China at the Department of Politics and International Relations at Oxford University, and after renewing contact with him a couple of years ago (and also conscious of the growing dominance of China in the world) I decided to get this book as a starter. (I've previously bounced off a couple of histories of China.)

It's a good readable, brief and almost breezy introduction to China as it has developed in the last century or so. By taking modern China as his subject, he more of less starts with the 1911 revolution (with occasional contextualising from the past) and argues for a relatively linear development from Sun Yat-Sen to Chiang Kai-Shek to Mao to Deng, Jiang, Hu and Xi; many things changed, but there is a lot of continuity too. The history section is only half of the book; he also looks at society as a whole, the Chinese economy and Chinese culture, this last of course extending well beyond the People's Republic. The second edition was published in 2016, when it was already clear that Xi was heading in a less liberal direction; now of course we are seeing the vicious crackdown on Hong Kong (which is very sad but surely not surprising), and the appalling treatment of the Uighurs, both clearly directed from the top. But Mitter seems to think that this can't last forever, and that there will be an inevitable pressure for liberalisation which Xi, or possibly his successor, will have to deal with; millions of Chinese live in democratic and open countries, most locally in Taiwan, and we should not underestimate the flexibility that already exists. It's a good book and you can get it here.

Another friend, Peter Martin, is about to leave Beijing after a couple of years there with Bloomberg; I will miss his regular reporting. I have signed up for the POLITICO weekly briefing but it's a bit US-focused. Open to advice for a regular update that I can skim on a weekly basis.

This was top of my pile of unread books by non-white writers. Next in that list is Guban, by Abdi Latif Ega. 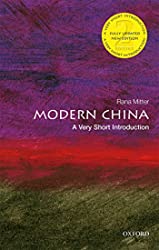