As previously mentioned, we started the month with a half-term break at my sister's in Burgundy. Cluny is a remarkable town with a ruined abbey which dominates the urban landscape. 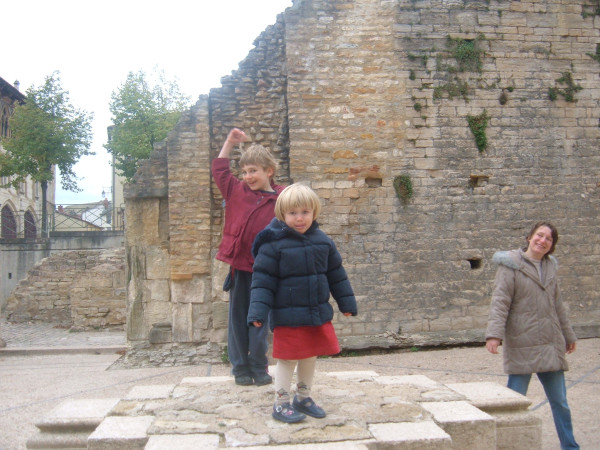 I moved my personal website to http://www.nicholaswhyte.info - I should start updating it a bit more often... I also visited London for orientation with the new job, and drove to the depths of the Ardennes for my last Crisis Group retreat. We got reports out on Serbia, Kosovo and Georgia, as my time with the organisation wound down.

The month ended dramatically. I had a work trip to Berlin which included, rather unusually, a meeting in the Defence Ministry (normally I end up farther east, between the Bundestag/Kanzleramt and foreign ministry). On my way out I asked the silver-haired colonel who I was meeting about the building's history. He told me that it had originally been the headquarters of the German Navy from 1911, and was then the territorial army headquarters; and then became the centre of resistance to Hitler within the armed forces, in particular under Claus von Stauffenberg. "So after 20 July 1944, von Stauffenberg was shot in one of the courtyards," indicating which one with a nod.

That wasn't the really dramatic part. The really dramatic part was after I landed back in Brussels on an early morning flight and started driving the family car to the office. As I went through the Montgomery tunnel, I felt a sudden KCHUNK, and the car coasted to a halt on the uphill stretch. Phone calls to Touring, long wait while traffic pooled around me in one of the prime choke-points of Brussels suburbia, finally the Touring guy arrived and towed me to a nearby layby, more long wait while he fiddled with the distributor cap before shaking his head in bafflement and calling a pickup truck, more long wait for the pickup truck, which then couldn't find the garage, probably because its driver was too busy talking to his girlfriend on his mobile phone to look for it properly, and eventually walked from the garage to my office with all my luggage from Berlin. The garage looked at the car for a few days and then confirmed that fixing it would cost more than we had paid for it, so since then I have largely commuted to Brussels by public transport.

In my office, my Macedonian intern E was doing handover to her successor, Belgian S. E now works for the European Commission, a few blocks from my current workplace, at least in normal times. S now lives in Geneva, where he married a Quebecoise; their children's French must be very interesting to hear. Here's a picture of the three of us at a conference in the European Parliament where I was speaking that week, E on the left, S on the right and me sitting down. (And a bearded chap, who I don't recognise, talking to us.) 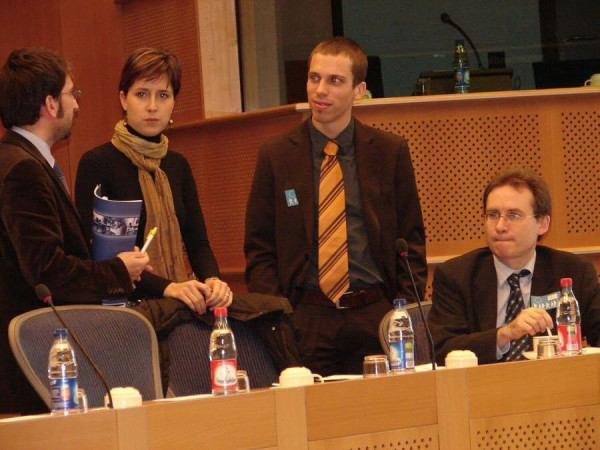 I managed to read 27 books in November 2006, more than half of which were short Doctor Who books, mostly by Ian Marter.

Non-fiction 9 (YTD 62)
The Breaking of Nations: Order and Chaos in the Twenty-First Century, by Robert Cooper
A Bachelor's London: Memories of the Day before Yesterday, 1889-1914, by Frederic Whyte
An International Relations Debacle: The UN Secretary-General's Mission of Good Offices in Cyprus 1999-2004, by Claire Palley (did not finish)
Disaccord on Cyprus: The UN Plan and after, by Clement Dodd
Everything is about Cyprus, by Hasan Erçakica
Skeletons on the Zahara, by Dean King
Western Sahara: The Roots of a Desert War, by Tony Hodges
Endgame in the Western Sahara, by Toby Shelley
Western Sahara: Anatomy of a Stalemate, by Erik Jensen

Comics 1 (2006 total 6)
Preacher: Until the End of the World, by Garth Ennis and Steve Dillon 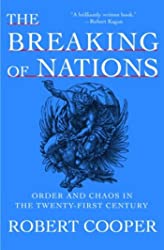 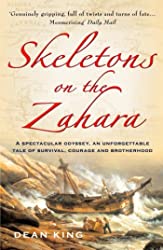 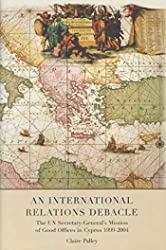