One problem with our donors was that several of them were not only financiers of the process but also had interests in its outcome, whether those were pressures from past and potential investors in the DRC or concerns about the cost and availability of suitable troops to deploy as peace-keepers. Thus three of them, the USA, France and the UK, were permanent members of the Security Council and one, Belgium was the former colonial power. Within the EU, our largest donor for the first two years, some officials clearly felt it should have more say in the process. As South Africa later assumed a more prominent role, voices were raised to claim that South Africa was not entirely disinterested either: their mining companies could profit greatly from the Congo's minerals. Such pressures are of course a reality of peace-making within the framework available today. While we were resisting external suggestions which we did not feel were consistent with our brief, we were also clearly failing to inspire confidence.

Philip Winter is one of the most interesting people I have ever worked with. During my Independent Diplomat days, he was our representative in Juba, the capital of South Sudan, from late 2010, just before the independence referendum, until it all went wrong at the end of 2013. While we were colleagues he kindly presented me with a copy of this book, which was published in 2012 but written several years before. Shamefully, I have only now got around to reading it. It was worth the wait.

The Inter-Congolese Dialogue doesn't have a Wikipedia entry, though there is one for the peace agreement with which it ended. As part of the process of winding down the awful Second Congo War, in which millions lost their lives through violence and related factors, the Congolese regime of Laurent-Désiré Kabila agreed reluctantly to find a joint government structure along with the groups that it had been fighting. Kabila himself then did his best to prevent the dialogue process from getting started, but was assassinated by his own guards early in 2001. His son Joseph, then aged 29, was rapidly chosen as his successor and engaged sufficiently for the factions to find a solution acceptable to most of the parties (and eventually accepted by all of them) in April 2002. Philip Winter was hired by the British government to work as chief of staff to the facilitator of the process, the former President of Botswana Sir Ketumile Masire, and tells the inside story of a mission which initially a lot of players did not want or did not understand, and which eventually came to be the focal point of international diplomacy in the whole of southern Africa.

It's a personal account which barely scrapes the surface of the actual content of the agreement, and assumes that the reader already has significant background knowledge of the Congo conflict (which I did, mainly thanks to the work of another former colleague from those days, Gérard Prunier). However, it is a very good account of the inside workings of the process, taking very much the anthropological perspective that I find sympathetic - diplomacy revolves as much around personalities and pressure from above and below as it does on the actual substance. There are effective, brief pen-portraits of the team led by Sir Ketumile Masire (QM to his friends) and some of the other protagonists as well. One interesting aspect is that QM and most of his team (and most of the other relevant African leaders) were anglophone, while the parties to the conflict were mostly francophone. Various means were found to get around this, including that Philip's own French is good enough for diplomatic work.

The story has a conclusion, in that the parties do reach the Sun City Agreement, but not an ending, as the implementation of the agreement was far from unproblematic and lower-level armed conflict continues to rumble on. There are some very important insights. Reaching an agreement was not inevitable, and there were several moments when the whole thing appeared to be about to crash - an important factor often being the international community hinting at a lack of faith in QM personally. The mediators pushed as hard as they could for greater inclusion of women in the process, but they could not push very hard and the results on that score were meagre. Philip goes into the reasons for the successes in some detail - basically, very careful preparation for the few key meetings that took place, the first of which was in Gaborone in August 2001, a continued emphasis on African and Congolese ownership, and constant transparency and clarity with the one set of stakeholders who really mattered, the parties to the conflict.

I twitched when several other people who I know personally popped up in the narrative - François Grignon, who was a colleague of mine at the International Crisis Group and is now the UN Deputy Representative in DR Congo; Claudia Wiedey-Nippold, now a senior Africanist in the EU External Action Service; Annemie Neyts, now retired but then a Belgian government minister. There is a lovely moment near the end where Philip introduces the rest of his team, most of whom were from Botswana, to the Alexander McCall Smith novels of The No. 1 Ladies' Detective Agency. The Batswana really got into them, and actually took a break from diplomacy one afternoon to go and hear McCall Smith do a reading.

It reminded me of another book by another former colleague, Collision Course, John Norris's account of the US negotiations over the Kosovo peace agreement in 1999. There are important differences. Not least, A Sacred Cause covers a longer period of time (three years rather than three months). Philip puts himself in the picture more than John. But he is also painting a wider picture - where John was working for one of the belligerents (the USA), Philip was in a sense working for them all. A really interesting read. You can get it here. 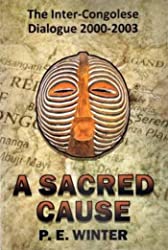