A spectacle, certainly, and as an early palace of industry clearly worthy of the guidebooks (themselves novelties). By any stretch of the imagination, though, the Manufacture des Tabacs was an odd place to look for someone who would become the most celebrated mathematical astronomer of his day—but not everyone follows a straight course to the person they might become. Thus it was that in 1833 a young man, freshly minted as a graduate of the celebrated École polytechnique, could be found every working day at the Quai d'Orsay, reporting for duty at the research arm of the factory, France's École des Tabacs.

A nice little study of two very different parts of astronomical history: first, the mid-nineteenth century quest for the planet Vulcan, and then the story of Einstein's conceptualisation of General Relativity and the practical test during the eclipse of 1919, which confirmed it. I had touched on this issue during my MPhil research on Sir Robert Ball, so it was a nice return to a previous topic. Levenson gets very much into the context of the two different situation, particularly vivid on Le Verrier in Paris in the 1830s and Einstein's early career. I felt he didn't quite bridge the two - I'd have liked a bit more on the noted astronomer James Craig Watson who actually claimed to have seen Vulcan during the solar eclipse of 1878, and the book ends up being very firmly two different stories with a common topic of interest but which are otherwise not that closely related. But both stories are interesting. You can get it here. 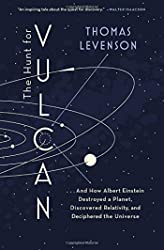