And what a squealing, tempestuous, fuss-making child she was. The quivering pink tongue and toothless gums in July's shrieking mouth were more familiar to her mama than her baby's arms and feet. With such agitation coming hourly from this newly born creature, Kitty did believe that this pickney must have been ripped from some more charmed existence. That she howled for the injustice that found her now a slave in an airless hut, in a crib too small, and being mothered by an ugly-skinned black woman who did not have the faintest notion as to why her pickney did yell so.

Another historical novel by Andrea Levy following on from Small Island, this time looking at colonial Jamaica at the time of rebellion and the abolition of slavery. I confess my more or less complete ignorance of Caribbean history, and while I have read a fair amount about the implementation and abolition of slavery in the United States, I don't think I've read anything about the history of the British colonies. In the wake of a bloody rebellion in 1831, the British smugly abolished slavery in the Empire with effect from 1834; but those facts and dates don't give any expression to the brutality of the institution or to the desperate society that emerged from the reform. Levy's story concentrates on women, her central character adopted by her master's sister as a pet and thus well-placed to observe the damage the system did to the white owners as well as the slaves. It's largely told in semi-patois but very readable. Like Small Island, it didn't blow me away, but I felt I learned a lot from it. You can get it here.

This was my top unread novel by a non-white writer. Next on that list is Modern China: A Very Short Introduction, by Rana Mitter. 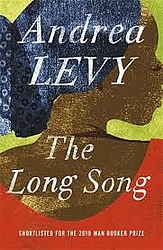