So, it's seven weeks yesterday since I was last working in the office. (I've been in twice, briefly, to the deserted corridors to pick up documents and other stuff.) When I do go back, it will be very different at first. People will be socially distancing, wearing masks, and generally being very careful. Cafes, bars and restaurants won't reopen until June, so until then a lot of the normal work socialising will be reduced to munching sandwiches at a safe distance in the park. (Which is not too awful.) I'll probably start off by using the car to commute. (It's a hybrid and I can charge it in the office car park, so the carbon footprint will not be too bad.)

With decent weather, and a few other things going right, my spirits have definitely picked up. I invited a bunch of people to celebrate my birthday via Zoom, and it was nice to see some familiar faces again, some of whom I had not seen in a long time. The Doctor Who rewatches have continued (there's another one tonight, The Girl in the Fireplace). I've continued to explore our neighbourhood for new things to look at - the other day I heard rumours of turtles in the Zoetwater ponds, but didn't locate any.

And I must admit that the long weekend for 1 May was a welcome break. I used the time to go through old photographs in the attic, finding a couple of myself taken at my 21st birthday party. (Yes, I had a moustache. Yes, I had a full head of hair. Yes, I was thinner.) It was very pleasant nostalgia - I have been gradually emailing the people concerned to remind know what they looked like in 1988. 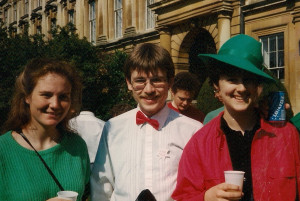 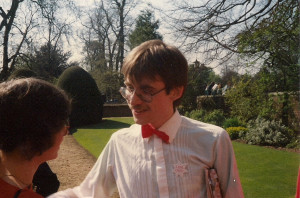 As we move to the next phase, the question a lot of people are asking is how much the world will change once this is over. I must admit that I'm a sceptic on this. I wonder how different things will really look in January 2021 compared to January 2020, assuming (as I think is fairly safe) that the economy has begun to bounce back by then. Some changes are inevitable, of course. A lot of us will be less well off, and some of us will be dead. In Europe at least, the state will have a greater share of the economy. There will I hope be a greater appreciation and respect for those providing vital services, health most obviously but also food production and distribution. But does this amount to a fundamental re-ordering of society? I don't really see it.

The structures of the United States and the European Union (and the United Kingdom) are all under strain. However COVID-19 is not going to provide the killer blow. As Jeremy Cliffe noted in the New Statesman, obsessing about whether the end of the EU is nigh is a distraction from the much more interesting and useful question of how the complicated pressures on the EU are changing it. EU governments continue to argue, but they continue to do so in an EU framework. And despite the starry-eyed predictions of some, I don't see that the pandemic has proved to be a tipping point for either Scottish independence or Irish unity - I would be interested to see any evidence that it has changed a single person's mind on either issue. (More locally: see Flanders vs Belgium.)

The USA is of course in a desperate situation, but that was already the case. By any objective measure the federal response to the pandemic has been a disaster, and President Trump's failure as a statesman and human being very visible. However from my obsessive browsing of FiveThirtyEight, it is striking how little President Trump's approval numbers have moved at all (whereas in Europe there have been seismic shifts in the polls in a number of countries). The narratives of both sides in America's deeply polarised political culture are being confirmed; as with the EU and UK, while the weaknesses of the system are being brutally exposed, it's not clear to me that anyone has changed or will change their minds about how the system works or should work.

So, all we can do is continue to work to make the world a better place. And try to stay in good health while we do it.
Collapse