I loved Tabitha very much. She was beautiful although so thin, and she would spend hours playing with me. We had a dollhouse that was like our own house, with a living room and a dining room and a big kitchen for the Marthas, and a father’s study with a desk and bookshelves. All the little pretend books on the shelves were blank. I asked why there was nothing inside them—I had a dim feeling that there were supposed to be marks on those pages—and my mother said that books were decorations, like vases of flowers.

I've realised there were a few books I read at the start of the year in the expectation that they would get onto the BSFA or Hugo ballots, so I saved writing them up; and then they didn't, so I never got around to it. One of these was The Testaments, by Margaret Atwood, the long-awaited sequel to The Handmaid's Tale. I opened it with some trepidation. It's not at all unusual for a sequel to a great work to fall flat, especially if written no less than thirty-five years later (but only fifteen years later in terms of the internal timeline). I'm glad to say that The Testaments thoroughly worked for me. The story of Gilead, the near-future America where women are thoroughly oppressed and treated as breeding machines for the male rulers, has meanwhile been refreshed by the HBO television series (which I haven't seen) - I understand that The Testaments reflects events from the TV show as well as from the original novel.

Whatever, it worked for me, with several parallel narratives between Gilead and the exiled radicals in Canada telling the story of the infiltration and subsequent escape of a young woman who turns out to be key to the internal mythology of Gilead, and the workings of Aunt Lydia who is crucial to the maintenance of the structure of Gilead's society, but possibly has another agenda. It's a happier story than The Handmaid's Tale, which is just as well as we live in much darker times. I did also like the postscript from a future academic conference trying to work out exactly what the hell was going on with Gilead.

The Testaments won the Man Booker Prize last year jointly with Girl, Woman, Other by Bernardine Evaristo. It's not quite as good a book, but it is a very good book. I voted for it for both the BSFA and Hugo ballots, alas in vain in both cases. You can get it here. 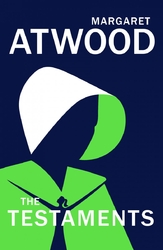