Opening of the third chapter:

I remember the occasion very distinctly when Cavor told me of his idea of the sphere. He had had intimations of it before, but at the time it seemed to come to him in a rush. We were returning to the bungalow for tea, and on the way he fell humming. Suddenly he shouted, “That’s it! That finishes it! A sort of roller blind!”
“Finishes what?” I asked.
“Space — anywhere! The moon.”
“What do you mean?”
“Mean? Why — it must be a sphere! That’s what I mean!”

One of H.G. Wells' famous novels which I had somehow never read before. There are several interesting points to it.

First, the narrator, Bedford, is thoroughly imperialist and sees the Moon as a new Africa to exploit (and get his name all over it). But he's also clearly a very unpleasant chap, and I don't think it's too much to see Wells mocking imperialism as simply answering the wrong questions, once Bedford and Cavor get to the Moon and discover that it just doesn't really compute.

Second, Cavor is a classic absent-minded scientist, but a rather early example of the type. He is exploited by Bedford and then by the Selenites, having made a great discovery and then not really applied it very practically.

Third, the moon itself is a bit of a disappointment for today's reader; I think Wells was trying for somewhere between alien and incomprehensible, but to be honest it ends up as the prototype of a pulp alien planet (with a bit of preaching about the perfect society). No doubt it seemed fresher to readers in 1901. He would have known perfectly well that the Moon has no atmosphere.

Fourth, Wells is rather disappointing in the way he often reaches for comic yokels - Cavor's assistants in the early chapters, who are seriously injured in an explosion, and the boy who is carried away by the capsule at the end, are simply played for laughs; no empathy is expected of the reader.

Fifth, there are a couple of lovely set-pieces - the initial introduction of the town of Lympne, and the chapter "Mr Bedford in Infinite Space" - which have Wells at his best in terms of vivid writing.

I am not sure how long I'll keep up my reading of Wells - I'm doing them in order of popularity, which probably also means quality - but I'll keep going for now. You can get The First Men in the Moon here.

This was my top unread sf book, and my top book acquired in 2019. Next on those piles respectively are The Giver, by Lois Lowry, and The Overstory, by Richard Powers. 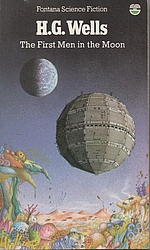