Under the treaties, the decision on its seat belongs not to the Parliament, but to the national governments. They reached agreement at the Edinburgh summit in December 1992, chaired by John Major, "on the location of the institutions and of certain bodies and departments of the European Communities" (OJ C-341 23/12/1992), later incorporated into a protocol to the Amsterdam Treaty. This states that: "The European Parliament shall have its seat in Strasbourg where the twelve periods of monthly plenary sessions, including the budget session, shall be held. The periods of additional plenary sessions shall be held in Brussels. The committees of the European Parliament shall meet in Brussels. The General Secretariat of the European Parliament and its departments shall remain in Luxembourg." This text can now be found in Protocol 6 of the Lisbon Treaty.

One of the authors is a friend of mine, and I went to the launch of the 8th edition in 2012 and ended up with a copy. The 9th edition, published in 2016, has now superseded this, and I imagine that a 10th post-Brexit edition must be in the works now that Corbett is no longer an MEP.

This is very much the world I work in, so I didn't learn a lot from the book, but I did find it a very good summary (and at 400 pages, surprisingly succinct) of how the European Parliament functions and what it does. It will be very useful indeed for people who are less familiar with the institution than I am. I found the summary of how various procedures work very helpful - one good example is the formation of Intergroups, officially recognised cross-party interest groups of MEPs, which is somewhat arcane in the official rules but explained more clearly here. Another point made early on, which I guess I knew but hadn't really though about, is that one quite often finds elder statesmen and stateswomen in the Parliament - former European commissioners, government ministers, prime minsters and even presidents add gravitas to the proceedings. And it is also interesting to note that one of the reasons that the French and Italian delegations of MEPs punch perhaps below their weight, compared to the Germans and (formerly) the British, is the comparatively high turnover at each election, which reduces their store of institutional knowledge.

What I slightly missed was a broader perspective on whether the Parliament uses its powers for Good, and how the overall dynamic between the EU institutions has shifted over the years. The 2012 edition was written too early to catch the Parliament's dramatic foisting of Jean-Claude Juncker as President of the European Commission onto unprepared governments in 2014, let alone the botch that MEPs collectively made when they attempted to repeat the process in 2019. (If I had to summarise what happened last year: groups outside the EPP failed to spot early enough that repeating their 2014 success depended on the EPP, who were always going to be the largest party, picking a candidate who was credible with national governments; and given a choice between a European Parliament insider who was unknown outside Bavaria, and a multlingual former Scandinavian prime minister with friends all over the EU, the EPP made the wrong choice.)

This was the top book acquired in 2012 on my unread shelves, and the non-fiction book that had lingered longest on them. Next on both piles - indeed, last for the books I acquired in 2012 - is A Sacred Cause, by my former colleague Philip Winter. You can get the 9th edition of The European Parliament here. 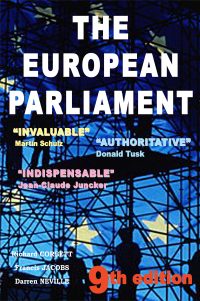