Last books finished
(lots of short books over a long weekend)
Muddy Lane, by Andrew Cheffings
Gideon the Ninth, by Tamsin Muir
A Woman in Space, by Sara Cavanagh
Catfishing on Catnet, by Naomi Kritzer
The Lady from the Black Lagoon: Hollywood Monsters and the Lost Legacy of Milicent Patrick, by Mallory O'Meara
Mooncakes, by Wendy Xu and Suzanne Walker
The European Parliament, by Francis Jacobs, Richard Corbett and Michael Shackleton
The Deep, by Rivers Solomon, with Daveed Diggs, William Hutson & Jonathan Snipes

Next books
The First Men in the Moon, by H. G. Wells
Long Song, by Andrea Levy

For the first time, it is beginning to feel like we are nearer the end of this than the beginning. Although Belgium yesterday extended the current lockdown to 3 May, there's a strong sense that this may be the last or second-last such announcement. People are starting to talk about exit strategies, including particularly in neighbouring countries. (But things will not move as quickly in the US or the UK.)

From our direct perspective, the government announced yesterday that residents of residential care centres and institutions for people with a handicap will be now able to receive visits from one person (not clear if that was one person at a time or one designated visitor per resident). This announcement caused an immediate kerfuffle with the care homes, who had not been forewarned or consulted, and are not ready. B and U's home called to tell us that they won't be ready for visitors before May. It's probably just as well; B will make do without us, and U would find it too confusing for either Anne or me to come and see her without bringing her back home - meanwhile, we are continuing regular Skypes with her.

It's clear now that the absolute numbers here in Belgium are pretty awful. We have had far more deaths than any other country of our size - more than 4,000 so far, to 1,200 for Sweden and 600 for Portugal, more than Germany or China, level with Iran. Per capita we are at the very top of the table, only just behind Spain and Italy (oh yeah, and Andorra and San Marino). It seems to have been a combination of bad luck, with several early centres of infection, and also a broader definition of the numbers being reported - where other countries are counting only certified deaths in hospitals, Belgium is (now) counting deaths in care homes too, even if they are not formally certified as being due to COVID-19. In any case, it's dreadful.

The dynamic, however, is a different matter. The number of daily deaths has remained agonisingly stable for the last ten days, but it's the last indicator to move (and stability here is anyway relatively good news). The daily number of new hospital cases peaked as long ago as 28 March; the total number of hospital cases has been steady in the mid to low 5000s since 1 April; the number in intensive care has been dropping slowly for over a week. So one gets the sense that we started from an unexpectedly bad position, but that once the situation became clear, the various governments have handled it reasonably effectively, and more importantly the population has generally complied.

I must say I've been wondering again about the stomach bug that hit me a couple of weeks ago. The historian Fern Riddell has written on Twitter of her experience of gastric-only coronavirus, and some parts of her description rang bells for me, in particular her account of it coming back every few days - I had it badly on 26/27 March, even worse on 1-3 April, and felt I was still shaking it off last week. But I'm fine now, and was never as bad as people who have had the Real Thing seem to have been (also, crucially, the rest of the household remained uninfected). Though in some ways I almost hope I have had it, as it would probably make me immune.

I'm certainly in a better frame of mind. The launch of this year's Hugo final ballot went particularly well, and I'm glad I had a hand in that. The Doctor Who rewatches organised by Emily Cook on Twitter have been a good bonding experience. I joined the Eastercon virtual room party on Saturday, making up for not being in Birmingham. My workplace organised an online pub quiz last night (my team won). Apart from that, I've been fairly successful in keeping the day job to the spare room (it has been keping me busy roughly 8.30-6 every day). In news from abroad, Martti Ahtisaari and his wife have apparently recovered from the virus.

Physical exercise makes a very big difference too. The long Easter weekend was sunny and I got out cycling several times. Anne, F and I have been getting out for walks almost every day, whether separately or together. I've been continuing to do my series of videos about the village. (Though the experience has reinforced my admiration for those who work in video and film production for a living.) Here we are in the garden on Easter Sunday, enjoying our eggs. I hope you are well too. Stay in touch. 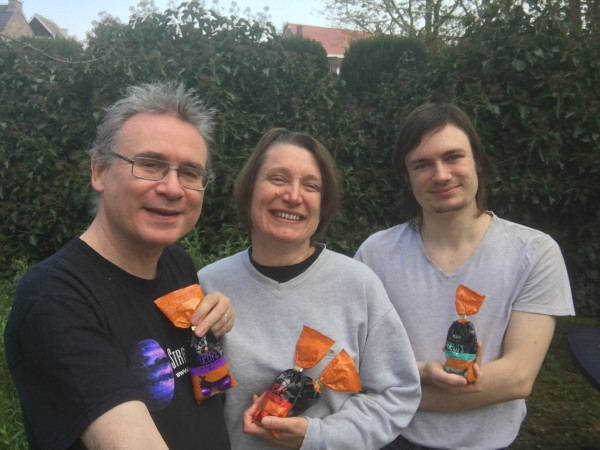