2. In today's Europe, as Marshall McLuhan put it: "the medium is the message." Raised on Europe's mantra of peace and stability, many Europeans actually feel a sense of superiority from the success of what they see as their innovative "peace policy." They believe that their multilateral institution-building has "erased the threat of war forever," and that this method can be applied across the globe. Even the euro was sold not as a tool for a dynamic financial future but as guarantee that Europe would never fight another war.

One of the advantages of a job like mine is that I often get exposed to top-level thinking about What Is Really Going On; one of the disadvantages of my lifestyle is that it often takes years to get around to reading analysis that I have picked up along the way. Jan Techau was the first director of the Brussels office of the Carnegie Endowment for International Peace; his successor, Tomáš Valášek, just got elected president of the Slovak parliament's Foreign Affairs Committee; and the new director, my good friend Rosa Balfour, took over this week. This book is the fruit of one of Jan Techau's early initiatives in the job, in 2011; he got a bunch of leading European thinkers to write short pieces on the theme "Time for Strategic Europe" for the Carnegie website, and then collected them in this book, published in 2012 and acquired by me then, but unread until now.

It's weird to look back a mere eight years and see what signals were seen and which were missed even by people who are generally good at this sort of thing. Brexit simply isn't mentioned. The threat of populism more generally is hinted at, but not in any very analytical way. The 2014 Ukraine crisis was unimagined. The Arab Spring was beginning to unfold, but the EU's failure to respond to it positively was not foreseen. (There is one particularly optimistic piece on that.)

One positive point was also not foreseen - the EU's involvement with the Iran nuclear deal, however shortlived that may turn out to be.

Back in 2011, of course, the real problem with EU external policy was a widespread concern about the performance of Catherine Ashton, the first High Representative under the Lisbon Treaty. It's telling that her name doesn't appear anywhere in the book either. There are some reflections on institutional tinkering and making the most of the new structures, but none of them really gets to the meat of the question.

Fundamentally, the reason the EU doesn't collectively pack more of a foreign policy punch is because member states have been reluctant to let it (contra the Brexiteer myth of the nascent EU army). It would have been interesting to explore why this was the case, and what arguments could be used to get Berlin and Paris in particular, but also Warsaw, Madrid, Rome and The Hague, not to mention the easterners, to let the shared institutions accrue more authority; or alternatively, to be realistic about the limits of what can be achieved.

Anyway, it'a always worth thinking about these things, and right or wrong there is a lot of informed comment in this book. You can get it for free here. Carnegie still maintains a Strategic Europe blog.

This was the shortest book on my unread shelf of those I acquired in 2012. Next on that list is A Sacred Cause: The Inter-Congolese Dialogue 2000-2003, by Philip Winter. 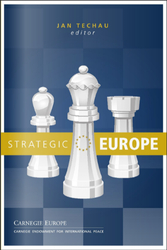