Because I am interested in Colón, I bought a copy of the translation when I spotted it in a used-book store. Part of a series the Italian state published to honor the five hundredth anniversary of his first voyage to the Americas, the book is a big, lush, cream-colored object that doesn’t fit on a standard bookshelf. Disappointing to readers like me, Gil and Varela announced in the introduction that “these previously unknown texts do not present any spectacular revelations” about Colón’s life and character. But halfway through the newly revealed chronicle of the admiral’s second voyage I came across a curious detail—one that wasn’t in the fine biographies by Samuel Eliot Morison and Felipe Fernández-Armesto.

I hugely enjoyed the same author's 1491: New Revelations of the Americas before Columbus when I read it a couple of years ago, and my kind spouse bought me the sequel for Christmas. It's not quite as good, but it is still very good. The theme is the massive exchange (mainly biological, but also economic and cultural) that was set in motion by the opening up of commerce and communication across the Atlantic (and, soon after, the Pacific). I had not realized, for instance, that there were no earthworms in the Americas before European settlement. The roles of potatoes, rubber, tobacco and sugar cane in early and later phases of globalisation are deeply explored. So is the explosion of South American silver onto world markets in the sixteenth and seventeenth centuries, which via Spain and Portugal had a massive and long-lasting effect on the economy of China. Particularly right now, it's worth remembering that China has been plugged into the global economy for a very long time indeed. Mann also has some interesting reflections on how chattel slavery evolved in the Americas from existing patterns of indenture from Europe and slavery in Africa, and there is a lot of fascinating material on the societies of freed an escaped slaves that developed on the margins of European settlement.

Lots of interesting stuff here, and if it's not quite up to the mark of the previous volume, that was a very high mark to keep to. You can get it here. 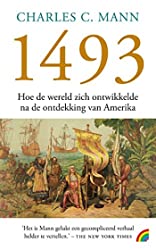