Myra Shumway had not been telling the truth when she described herself to Doc Ansell as a newspaper correspondent For the past five years she had been a "dip." If you don't know what that means, just stand on any street corner and flash a fat bank-roll. Before long some dame will take it off you and you'll know nothing about it until hours later. That dame was a dip.

This entertaining book is by a well-known writer of hard-boiled detective fiction, turning his hand for once to the paranormal. Miss Shumway has run away to Mexico; as well as being a stage magician she has developed real magical powers, and also turns out to have double trouble:

Myra was becoming blurred. Her figure was smudgy, like a blurred photograph and even her features seemed to be dissolving.
“What’s happening to you?” I exclaimed, feeling my heart pounding.
She didn’t say anything, but just stood swaying before me. I could see something filmy in front of her. Something that moved. Then a shadowy figure stepped from her.
You’ve seen those trick films where people become transparent? Well, that’s exactly how this figure looked. It sent my blood pressure up and gave me the scare of my life.
As I watched, the figure became more distinct and then there she was—Myra the second, the spitting image of Myra except she was dressed only in white satin panties and brassiere.
I knew it must be Arym. But, even seeing the two together, it didn’t make it possible.
Myra backed away. She was as startled as I. Then she clutched at her frock and gasped.
“You—you’ve got on my underwear!” she said.
Arym admired her figure. “Well, I had to have something,” she returned airily. “After all we aren’t alone.” She looked at me archly. “Aren’t you staring a little too much?” she asked.

There's also a glorious sequence where a bad guy is transformed into a sausage and eaten by a dog which then acquires the powers of speech. It's not Great Literature but it's quite good fun. Two films were based on it - the French/Argentinian 1963 film Une blonde comme ça/Mi novia es otra and the 1995 Rough Magic with Bridget Fonda and Russell Crowe. I will look out for them. You can get the book here (though the whole text seems to be online here) 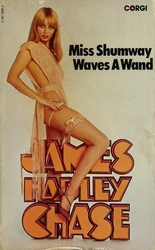