The Danes do seem to have an uncommon facility to get on with each other regardless of age, class or outlook. Egality comes easily to them. One of my most cherished memories of this inclusiveness is of a friend's fortieth birthday party where his octogenarian grandmother was seated next to the country's most notorious rapper. and the two spent a jolly evening chatting together.

A Finnish friend was kind enough to give me this book as a Christmas present. I'm not very surprised - of the five countries and people Booth surveys, he gives the Finns much the best write-up (which is fine with me as I am more familiar with Finland than the others). He starts with a relatively long piece on the Danes (because he married one and lives there) and ends with a relatively long piece on the Swedes (because they are the biggest of the Nordic countries), and in between goes through Iceland, Norway and Finland in that order, combining interviews with experts and his own observations and, frankly, prejudices. Booth is mainly a food writer, and he is funniest about food, particularly Icelandic food:

I shall fight for as long as I remain conscious to avoid ingesting håkarl again. Apparently, the shark meat caught in these parts is toxic if eaten fresh but, rather than giving up on the whole eating shark business altogether, they eventually hit upon the idea of burying it in the ground for between eighteen months and four years until it has decayed to the point where it becomes, in the very loosest sense of the word, edible. This is håkarl.

I tried some at a bar in central Reykjavik. Clearly used to tourists 'just wanting a taste', a waitress brought me two small, sugar-cube sized chunks of unappetising-looking greyish meat in a sealed jar, 'Don't worry, it doesn't taste as bad as it smells,' she said, smiling. 'If you can get past the smell then that's the worst of it.'

She was lying. True, the smell from quite some distance away as she opened the jar was indeed abominable: redolent of a multistorey carpark staircase on a hot summer's day, with accents of urine and vomit. But that wasn't the worst of it. The burning, fishy-cheese flavour was much, much worse. I concluded that håkarl's name was onomatopoeic. It was the noise one made upon upon eating it.

It's an interesting survey from someone who has taken the effort both to understand why the Nordic countries have such good reputations as placed to be alive, and also their flaws one by one. I think he is a bit harsh on Sweden, which is not really as close to a totalitarian society as he seems to argue, and maybe also on Iceland, which surely has some redeeming virtues; but in general its an entertaining survey, which reflects what the Nordic countries think of themselves and each other almost as much as his own prejudices. I think that fans of any of the Nordic countries will find stuff to recognise here, and those who don't know a lot about the Nordics may be inspired to find out more. You can get it here. 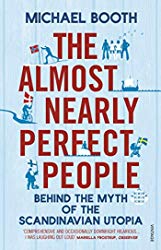