Matt had waltzed through his first year of junior high and begun his second with the hyperactive mood swings of puberty. He surrounded himself with girls from school and seemed to share their endless giggling fits as well as their PMS rages, and would go into a funk at the drop of a hat. Jocelyn had expressed her concern that Matt might come out of the closet this year or the next, and although Steve had raised his eyebrows at the idea he suspected Jocelyn was right. The idea alarmed him, not because either of them held conservative views but because he still saw Matt as what he always had been: a sweet, vulnerable child.

This novel is a horror story about a middle-class village near West Point, New York, which is haunted by a seventeenth century witch. Shades of Welcome to Night Vale, but nothing like as funny; it is very effectively told, and I read to the end, but horror as such isn't really my thing. You can get it here.

This was my top unread book acquired in 2016. Next up is Arthur C. Clarke's Venus Prime 1: Breaking Strain, by Paul Preuss. 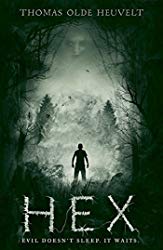