Years later, the matron who discovered him on the porch remarked, looking into his eyes was like staring down a hall with empty mirrors.

I came across this when researching science fiction visions of the year 2020. It is a 1974 anthology of eight stories, six very big names on the harder side of SF - Ben Bova, Larry Niven, Harlan Ellison, Poul Anderson, A.E. van Vogt and Norman Spinrad; and two authors who I had not previously heard of, Dian Girard (though it turns out that as J.D. Crayne, she wrote Murder at the Worldcon) and Dave McDaniel, who mainly wrote Man from U.N.C.L.E novels and died suddenly in 1977 aged 38. In his introduction, Pournelle predicts, rather optimistically:

We will, many of us writers and readers, be around in 2020, medical science being what it is—-assuming that anyone will be around in 2020. By then, probably, nobody will give a hang what we said here; but the authors of this book hereby serve notice that we will buy a drink at the 2020 World Science Fiction Convention (Marscon?) for each and every reader who brings with him a copy of 20/20 Vision and points out—briefly—just where we went wrong in our visions of the future.

This year's worldcon is in Wellington, New Zealand, which is almost but not quite as exotic as Mars. Of the authors, only Bova, Niven and Spinrad are still with us, and I don't think any of the three will make it to CoNZealand.

The stories are very much of their time, with several of the authors (Bova, Ellison, van Vogt) banging drums that they banged elsewhere. The Anderson story is particularly awful; the protagonist overthrows Soviet rule in North America with a weapon that has surgically replaced his penis. The best and shortest is Girard's "Eat, Drink and Be Merry", in which a married woman of 2020 finds herself forced to cook hearty meals for husband and family while her own calorific intake is constrained so that she can maintain her lovely figure. The dark force behind this appears to be the state itself, but we can easily read across to the whole of society forcing women to live up to artificial expectations. If you want more details on the stories you can read Paul di Filippo here or James Davis Nicoll here. Or you could just get the book here. 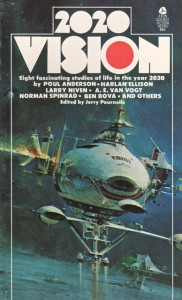