The electronic frisker on the door swallowed his I.D. card and returned it instantaneously. Then the security guards waved him through with their N-series, and after two minutes on the travelator he was there. Most employees of the daily paper were away for May Day, but some of those working on the Sunday were around. One of the advantages of having been sacked, he mused, was that he now knew precisely who were his real friends on the paper. And, more importantly, his real enemies.

Right-wing historian Andrew Roberts wrote this in 1995, foreseeing a referendum twenty years later (2015 rather than 2016), won by a 52:48 majority, as a result of which Scotland splits from England, and Ireland is reunited; and incidentally the journalist Matthew D’Ancona was on the losing side, just as he was in our timeline. Oh yeah, the Speaker of the House of Commons at the time of the referendum is John Bercow (who in 1995 was not even an MP yet, though he was clearly on that path).

This being swivel-eyed future history, of course, the referendum is on the UK’s absorption into a United States of Europe, and the story is actually set another thirty years further into the future, in 2045, as our brave but admittedly unattractive hero pursues a documentary trail indicating that the referendum result was rigged by fiendish computer manipulation. SPOILER: The exiled King William returns from New Zealand to save the day.

It’s quite engagingly written, but even on its own terms the plot is bonkers - our hero, supposedly a famous forensic historian, has displayed little interest in his own family background, which creates space for some very silly revelations when he finds out certain crucial facts about his parents and grandparents. By the end I had completely lost track of who among our hero’s friends and relatives was on which side, let alone why.

Future London has had all vestiges of British nationalism brutally removed or renamed, which wasn’t especially funny when the Two Ronnies had the Tower of London renamed Barbara Castle by Britain’s new feminazi overlords, and isn’t very funny here. There are predictable authorial whines about political correctness. Most striking of all to today’s reader is the complete lack of technological progress in half a century. There are no mobile phones - everyone uses pagers - and the electronic communications depicted in the book were already well out of date by 1995 let alone 2015 (and forget about 2045).

The author may possibly have intended this as an Awful Warning of what the federal European superstate would look like, but it comes across as a squib by a posh but insecure boy who thinks he's having a laugh with his friends, but they are quite possibly sniggering at him rather than with him. If you really want, you can get it here. 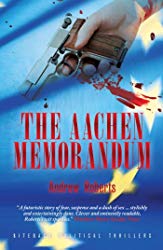