Second paragraph of third chapter (actually I found it rather difficult to count to three here, but this will do):I gave up on this about a quarter of the way in. Basically, Kant is not asking questions that I am interested in, nor answering them in a way that inclines me to take an interest. Wikipedia tells me that "Kant's goal was to find some way to derive cause and effect without relying on empirical knowledge." I can't see why anyone would want to do such a thing, and the almost complete separation of the subject matter from practical reality frustrated me (even though I do realise that this was largely the point). It was mildly interesting to see in his discussion of time and space some precursor to Einstein's conceptions of the same, but not interesting enough to keep me going. If you really want to, you can get it here.

First of three books in a row that I simply could not finish.

This was the non-fiction book that had lingered longest unread on my shelves. Next would have been Kant's Critique of Practical Reason, but I think I'll give that a miss and go straight to Adam Smith's Wealth of Nations. 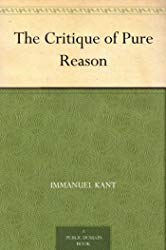