I was in Cambridge yesterday and found I had time to attend the first half of the Cambridge University Ballet Club's Lent Term matinee performance. I have only been to one ballet before, "Giselle" in Bratislava last year, but it happened that I had time to kill on a wet Saturday afternoon and spotted this diversion in the West Road concert hall. Unfortunately shortage of time meant I missed the main programme item, a choreography of Mendlesohn's "Midsummer Night's Dream", but I caught the first two, based around Dukas' "Sorcerer's Apprentice" and Rimsky-Korsakov's "Sheherazade", both of which are favourite pieces of mine anyway. Here are Victor Gomez and Talia Regan as Sultan Shahriyar and the title character in the second of these. (Photo from the programme - obviously you can't take photos or film the performance.)

We started with "The Sorcerer's Apprentice", where apart from Finn Longman in the title role, I was really impressed by Lillian Wang as the First Broom, and was not surprised to learn from the programme book that she started ballet at the age of seven in Beijing. The piece required a lot of ensemble co-ordinating, where some of the cast were maybe a little less co-ordinated than others. 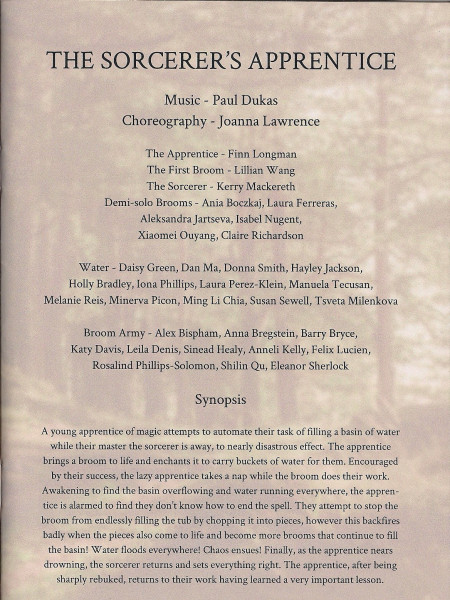 Sheherazade was a real tour de force. I noted above the two leads, one of whom has been doing ballet since the age of nine and the other since the age of three. All of the other soloists were pretty good - the two who really grabbed my attention as much for the dynamic they had going between them as for their dancing skill were Scott Lee and Anastasia Stulova as Alaeddin and his wife Lady Badr al-Budur. She has been dancing since the age of 5; he took it up only two years ago. There is hope for all of us. 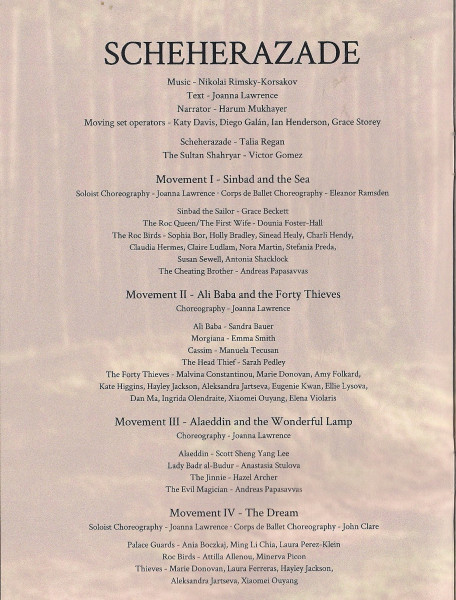 The unseen star of the show, of course, was the choreographer, Joanna Lawrence, who is also the Ballet Club's president. It's an extraordinary feat of creativity to turn three well-loved pieces of classical music into new forms of dance. There were lots of lovely touches with the dancers responding to the music to convey elements of the story. She is apparently doing a PhD on Bronze Age Scandinavian rock art. I wonder whether her skill in choreography will turn out to be her future.
Collapse