Second paragraph of third essay ("Pen, Pencil, And Poison - A Study In Green", about Thomas Griffiths Wainewright) - brace yourself, it's a long 'un:

This remarkable man, so powerful with 'pen, pencil and poison,' as a great poet of our own day has finely said of him, was born at Chiswick, in 1794. His father was the son of a distinguished solicitor of Gray's Inn and Hatton Garden. His mother was the daughter of the celebrated Dr. Griffiths, the editor and founder of the Monthly Review, the partner in another literary speculation of Thomas Davis, that famous bookseller of whom Johnson said that he was not a bookseller, but 'a gentleman who dealt in books,' the friend of Goldsmith and Wedgwood, and one of the most well-known men of his day. Mrs. Wainewright died, in giving him birth, at the early age of twenty-one, and an obituary notice in the Gentleman's Magazine tells us of her 'amiable disposition and numerous accomplishments,' and adds somewhat quaintly that 'she is supposed to have understood the writings of Mr. Locke as well as perhaps any person of either sex now living.' His father did not long survive his young wife, and the little child seems to have been brought up by his grandfather, and, on the death of the latter in 1803, by his uncle George Edward Griffiths, whom he subsequently poisoned. His boyhood was passed at Linden House, Turnham Green, one of those many fine Georgian mansions that have unfortunately disappeared before the inroads of the suburban builder, and to its lovely gardens and well-timbered park he owed that simple and impassioned love of nature which never left him all through his life, and which made him so peculiarly susceptible to the spiritual influences of Wordsworth's poetry. He went to school at Charles Burney's academy at Hammersmith. Mr. Burney was the son of the historian of music, and the near kinsman of the artistic lad who was destined to turn out his most remarkable pupil. He seems to have been a man of a good deal of culture, and in after years Mr. Wainewright often spoke of him with much affection as a philosopher, an archaeologist, and an admirable teacher who, while he valued the intellectual side of education, did not forget the importance of early moral training. It was under Mr. Burney that he first developed his talent as an artist, and Mr. Hazlitt tells us that a drawing-book which he used at school is still extant, and displays great talent and natural feeling. Indeed, painting was the first art that fascinated him. It was not till much later that he sought to find expression by pen or poison.

Somehow my usual reading lists threw up a glut of philosophy books in quick succession, of which this is the first. Yes, Oscar Wilde as political philosopher; it is not forgotten in Ireland that his mother was literally a revolutionary, and he was consciously subversive through his own art.

This is a collection of his political works, mostly from 1891, starting with "The Soul of Man Under Socialism", an essay which forcefully argues that the abolition of property will be good for culture and happiness. Here we see his wit directed against, well, capitalism:

What is said by great employers of labour against agitators is unquestionably true. Agitators are a set of interfering, meddling people, who come down to some perfectly contented class of the community, and sow the seeds of discontent amongst them. That is the reason why agitators are so absolutely necessary. Without them, in our incomplete state, there would be no advance towards civilisation.

The essay "Pen, Pencil, And Poison", about the writer and murderer Thomas Griffiths Wainewright, is an absolute thrill. I had never heard of this chap, who moved in the highest artistic circles, but was sentenced to transportation to Tasmania (then Van Diemen's Land) for forging financial documents from one of his victims (and never actually prosecuted for the murders).

From Newgate he was brought to the hulks at Portsmouth, and sent from there in the Susan to Van Diemen's Land along with three hundred other convicts. The voyage seems to have been most distasteful to him, and in a letter written to a friend he spoke bitterly about the ignominy of 'the companion of poets and artists' being compelled to associate with 'country bumpkins.' The phrase that he applies to his companions need not surprise us. Crime in England is rarely the result of sin. It is nearly always the result of starvation.

There are also some out-takes from The Picture of Dorian Gray, which I found fascinating, and some aesthetic dialogues which I found less effective. But all in all, this was a really interesting set of essays, and you can get it here. 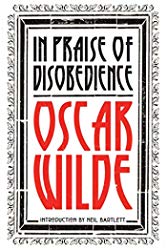