She’d been away in Boston only two weeks. How was that long enough for a hostile takeover at home? Iano and his new friend Pete Petrofaccio had cooked up a scheme of stopgap repairs to preserve what was left of their home’s integrity. Replacing the whole roof was pointless given the state of things, and wildly beyond their means, so they’d settled on a banged-together tin patch to close the widening rift.

I've generally enjoyed Kingsolver's novels, and enjoyed this as well, though it did not blow me away quite as much as Prodigal Summer or The Bean Trees. It's the story of two different families living in the same house (or at least the same plot of land) in New Jersey in 1871 and 2016, both dealing with the fact that the house is falling down, which is a fairly obvious metaphor for the disintegration of society. She draws a telling parallel between Trumpism and the anti-Darwin hysteria of the nineteenth century, but also there are some nicely depicted moments of both family and nature. As I said up top, I enjoyed it for description and coloration, but wasn't completely convinced by the linkage (or lack thereof) between the two plot strands. You can get it here.

This was my top unread non-genre fiction book. Next on that list (and on several others) is Small Island, by Andrea Levy. 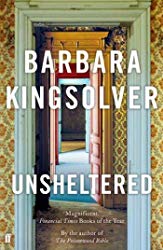