And then, one morning out trying to scratch sustenance from the dying fields, they would have looked up, movement in the corners of their lateral eyes, and seen… them. Just like in the stories but a thousand times worse, things that were like people, but stunted, spindly, huge-eyed, their faces sharp and jagged with teeth. And that child must have thought: It’s true, and they came for me just like the rhyme! But not for long. Thysalys had seen ample evidence of how goblins treated any who fell into their clutches. Evidence mostly comprising gnawed gristle and discarded skin.

Another anthology which I got because three of the stories in it were on the BSFA long list (though none of them made it to the shortlist). It's a collection of fairy tales told by non-human cultures, in some of which humans are the villains. Some good stuff here, most memorable being the very first story, "The Little People" by Una McCormack, and my personal favourite, "The Land of Grunts and Squeaks", by Chris Beckett, in which a formerly telepathic race loses that power and has to learn to communicate with sounds. You can get it here. 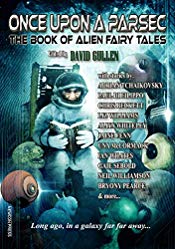