Current
The City in the Middle of the Night, by Charlie Jane Anders
A Popular History of Ireland, by Thomas D'Arcy McGee
The Aachen Memorandum, by Andrew Roberts

Last books finished
The Critique of Pure Reason, by Immanuel Kant - did not finish
Oliver Twist, by Charles Dickens
Shadow over Mars, by Leigh Brackett
Arc of the Dream, by A. A. Attanasio - did not finish

While I have vague memories of watching this in 1975 - my brithday was on a Saturday that year - I have much clearer memories of renting the video in about 1990; it was one of the first Doctor Who stories to be released on VHS. I persuaded sceptical housemates in the wonderful 49 Chesterton Road, Cambridge, to gather round and watch, and we all enjoyed the nostalgia trip.

Revenge of the Cybermen has a rather poor reputation among fandom, but I rather enjoyed it this time round (I remember it first time round in 1975, when the second episode was broadcast on my eighth birthday, and watched it again in around 1990). If you treat it as Doctor Who and the Vogans, rather than pay attention to the irritating Cybermen, it is a great story - the three main Vogan characters, played by well-established pillars of Who like Michael Wisher (Davros), Kevin Stoney (Mavic Chen/Tobias Vaughn) and Ian Collings (later Poul in The Robots of Death and Mawdryn) all spark off each other well and give a convincing picture of a paranoid, factionalised society. Unfortunately the Cybermen rather spoil the plot - they have a different crucial weakness each time they appear, it seems - and I can never watch the Doctor's discovery of the Plot Device Cupboard in the last scene without wincing.

Revenge of the Cybermen is decent enough but not at the level of Genesis or Ark. The exploration of the internal politics of Voga, a closed and fearful society wrestling with technical change and contact with the outside world, is the most interesting thing Davis ever wrote, and the lead Vogans (including stalwarts Michael Wisher and Kevin Stoney) rise to the challenge. The Cybermen are actually the weakest point of the story; apparently the last of their race, suddenly vulnerable to gold (a new Sekrit Weekniss which we had never heard of before) and reprising the plan which worked so badly for them in The Tenth Planet, The Moonbase and The Wheel in Space.

I see that the Vogans have the Great Seal of Gallifrey on display, so they must have had contact with the Time Lords from way back (he said, desperately retconning). Tom Baker is getting a little out of control here, visibly giggling as he tells Elisabeth Sladen that they are heading for the biggest bang in history and posing with the two astronauts as the Three Royal Monkeys in episode three.

This time one thing that struck me was the complete absence of women among the guest cast. Or do female Vogans look just like male Vogans to the unpracticed eye? Perhaps they have no gender? In any case, they are all played by male actors, including Kevin Stoney who played the two greatest villains of the black-and-white era, Mavic Chen and Tobias Vaughn, and Michael Wisher who we have just seen in very different prosthetics as Davros.

Anyway, if you're not aware of Cybermen continuity, as I was not in 1975, it's a pretty good story. 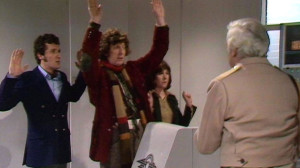 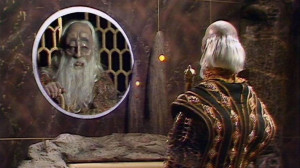 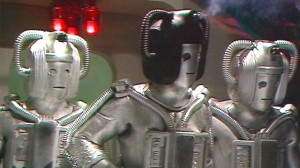 I wrote of the novelization:

Again, one of those cases where Dicks has taken a so-so story and made it into a good read. Partly this is because of good scene-setting; partly also that he is liberated from the constraints of poor special effects; mainly that he seems to have been having fun with the script. I remembered this one fondly from my childhood, and for once it lived up to my memories.

I made this observation about the Season 12 novelizations as a whole:

The Season 12 novels, with slight reservations for Doctor Who and the Giant Robot, are consistently good in a way that I don't think can be said for any other season so far. (I know that Season 7 has its partisans, though.) All the elements seem to have come together successfully. There are a couple of significant differences in characterisation: Dicks' version of the Fourth Doctor is more jolly than the screen version, so I imagine that fans coming to Tom Baker's stories via the books will be surprised by the darkness in the original portrayal. Harry comes over as more clueless than gallant as written by Dicks (the reverse is true in Marter's books for some strange reason).

You can get the DVD here (here as part of a two-pack with Silver Nemesis) and the book here.

I have been noting that most of the Season 12 stories share a theme that I had not previously spotted: the scientist villain (Miss Winters, Styre with only a small stretch, Davros) who is misusing public resources to develop technology for evil purposes. With only a little more stretching, it applies doubly here - Kellerman has killed off almost the entire crew of the space station to favour his own goals (even if they are more personal gain than scientific), and Vorus, though not a scientist, has presumably diverted public resources from the budget Tyrum gave him to build the Sky Striker. So that's basically every story this season except The Ark in Space, where I think Noah doesn't quite fit the bill (because it's a story of political leadership itself gone bad, not being subverted by the research sector).

There are actually rather few other stories in Old Who whose plots are close to this theme. In Planet of Giants, Forester is developing DN9 with private funding, not government funding. Mavic Chen is diverting public resources all right, but buying in technology from elsewhere as part of The Daleks' Master Plan. The sinister tech in The Savages is completely under government control; that's precisely the problem. The War Machines almost fits the bill but the perverter of government resources is itself an AI, WOTAN.

Two Season 4 stories do pretty much fit this, most obviously Power of the Daleks, where Lesterson lets his research get out of control, but also I think The Underwater Menace, where Zaroff is using the resources supplied by King Thous but not for the purpose intended. The Enemy of the World is also a decent case, thoughSalamander is not himself a scientist.

In the Third Doctor era, Inferno is close (though I am not sure that Stahlmann thinks he's doing anything other than what was expected of him); the Master in The Mind of Evil is a clear-cut example; the scientists in The Time Monster are innocent I think; The Green Death doesn't count because it's private sector money (and also the main baddie is anothe AI); but Invasion of the Dinosaurs is another clear case.

Looking forward from Season 12, we have thin pickings. Robots of Death? Private sector, and Capell/Dask isn't tasked with research. The Doctor himself, in The Invasion of Time? It all turns out to be part of a bigger plan. The Leisure Hive counts for sure; I don't think anything else does, and not sure that any Fifth Doctor story fits the bill either. I am a bit confused as to what any of the Sixth Doctor stories was actually about. Possibly Vengeance on Varos fits. I don't think any Seventh Doctor story does.

In New Who, there's a bit more of it - arguably it's the whole point of Torchwood, outside the government - but the baddies tend to be aliens disguised as humans - the best example are the Krillitanes in School Reunion; Blon Fel-Fotch Pasameer-Day Slitheen in Boom Town and the Master's machinations in The Sound of Drums/Last of the Time Lords are again more cases of political leadership going bad and using Science and Technology as part of their evil plan, which isn't quite the same thing.

Running out of energy here; but my point is that there really are only a handful of Doctor Who stories featuring a scientist (or military technician) diverting substantial resources from his or her own political masters for nefarious purposes; and four out of five in Season 12 clearly do address this theme as a core plot element. Interesting.

I am looking forward to much discussion of this and many other points at Gallifrey One, the Los Angeles Doctor Who convention where I will be this weekend. Look out for pictures.
Collapse