The parties have been 'locked in talks' as they say (inaccurately) since the start of May, shamed into them by the public outrage at the murder of Lyra McKee. As with all previous negotiations since January 2017, though, momentum has been lost and the 'never again' horror of the moment submerged in the tit-for-tat squabbles of an increasingly fractious summer. The Prime Minister is determined, he says, to give all of the parties a fair and equal hearing, as indeed he is obliged to under the terms of the Good Friday Agreement.

A book on the agonies of Northern Ireland, written by an author who I generally admire (he wrote the script for the film Good Vibrations, which stars Jodie Whittaker as the wife of legendary Belfast music figure Terri Hooley). He takes the story right up to the start of last month, which of course means it's now rather out of date, with the December 2019 election and the restoration of devolution having happened in the meantime (having said which, cracks are already appearing in the new settlement). Patterson's style is engaging, but I wish he had something more concrete than offering a long long sigh of despair. Not that I can really blame him. I think it would be an entertaining and fairly light introduction to Northern Ireland for people who don't know too much already. You can get it here. 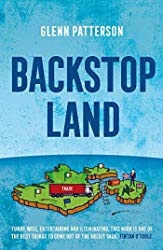 So, looking at the final scores, my Sunday prediction was wrong in 19 out of 39 constituencies - just under half. Two of these were simple error on my part - I mixed up Labour and the Social Democrats in Wicklow, and FF and FG in Mayo.

But in general I did not appreciate how transfer-toxic FF (and to a lesser extent FG) have become. The best illustration here is Dublin South-Central, where neither of the traditional parties won a seat, despite starting in second and third place on first preferences.

The older parties did not even transfer well internally. The best example is Tipperary where Fianna Fail had over a quota of first preferences, and Fine Gael had more than 0.8 of a quota, normally enough to win a seat, but FF only just scraped into the last seat and FG were runners-up. The FG front-runner got less than 60% of his running-mate's transfers; the FF front-runner got only 35% from their second candidate when she was eliminated!

By contrast, Greens, Social Democrats and Independents were often more transfer friendly than I expected. Independent candidate Dean Mulligan started in ninth place in Dublin Fingal, but came with 150 votes of winning the fifth and final seat.

All this meant that my Sunday prediction was way out from reality, except, oddly enough, for SF who I correctly called at 37 seats. FF and FG underperformed my Sunday prediction, on 38 and 35 respectively rather than 47 and 37. Labour got the 6 that I expected once I sorted out my Wicklow mistake. The others all did better: 21 Independents (including Aontu) rather than 17, 12 Greens rather than 9, 6 Social Democrats rather then 3, 5 SPBP rather than 3.

All in all, a useful object lesson in humility for me!

Last year's winner was third out of five on this ranking.

Four of the candidates for Best Short Fiction are available for standalone purchase:

Interesting to see that the two top novellas have both outsold the top novel. (The other two candidates are “Jolene”, by Fiona Moore, and “For Your Own Good”, by Ian Whates.)

And finally for now, four of the five Best Non-Fiction candidates are available for purchase:

The other is “Away Day: Star Trek and the Utopia of Merit”, by Jo Lindsay Walton, an online essay. (I have to say that I am not sure that I will fork out £75 for a book of essays.)
Collapse