Again, an Old Who story that I got back to pretty early after New Who revived my enthusiasm, but this time I am pretty sure that I watched it both first time around in March/April 1975 and then the 85-minute cut shown during the Christmas holiday that year. In April 2006, I wrote:

Watched episode 4 last night, and episodes 5 and 6 tonight. Will have to go back and do it all again with the commentary turned on. But it really is very good, after all this time. The whole thing is very much Davros' story, rather than that of the Doctor or even the Daleks. The last few scenes, where his creations turn on him because they are doing what he made them to do, are superb.

Pity? I have no understanding of the word. It is not registered in my vocabulary bank.

And rewatching in 2010, I waxed a bit more lyrical:

Genesis of the Daleks will never get old for me. First off, it looks good; an astonishing contrast with the previous year's Death to the Daleks, which just looked like a few sets draped around a studio, here we really feel that we are on a war-ravaged planet with two different factions at odds. The performances range from solid (eg Harriet Philpin as Bettan) to unforgettable (Michael Wisher as Davros, Peter Miles as Nyder).

But it really works because the basic plot idea is brilliant, to go back to the beginning of the Daleks' story and try to change it, an idea which turns out to be really a character study of Davros falling in love with his own creations, and then finding that they have outgrown him and will destroy him. Since we lost the Master we haven't had a decent villain in a Doctor Who story (with the mild exceptions of BOSS and Lynx). It is not surprising that Davros has had such a long afterlife (and I really recommend the Big Finish prequels about his childhood and earlier career).

I found it every bit as compelling as before. In particular, I've seen some complaints that there is too much running around corridors to fill up time, but I have to admit that I did not notice this as a problem on any of my viewings. The weariness of war and the technical genius offering a magical solution, the shout-outs to Nazi chic, the grimness of it all, adds up to the best story of this season and one of the best ever. 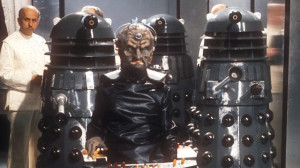 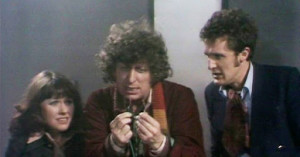 Incidentally, if you count Trial Of A Time Lord as a single story, but count Mission to the Unknown as a separate story from The Daleks' Master Plan, there are 155 stories altogether in Old Who, and Genesis of the Daleks is the 78th, precisely in the middle.

One of the greatest TV stories, and I still think one of the best novelisations. The action is breathlessly stripped down from six episodes to fit the Target format; but Dicks also adds a lot more circumstantial detail about the horrible landscape of Skaro, Davros, the Kaled and Thal leaders, the reactions of Harry and Sarah to their environment, and the Doctor's moral dilemmas. Despite knowing the story as well as I do, I found myself reading avidly to the end.

Security Commander Nyder and General Ravon were waiting for them. Nyder was turning over the odds and ends taken from the Doctor's pockets. He held up a small, complex instrument surmounted with a dial. 'What is the function of this object?'

This time again I thought that it's well done, though I did register that Dicks' Doctor is a little funnier than Baker's, which slightly jars the mood at times. But it's a book you could give someone who wanted to know what Old Who was all about and be confident that they came away with an accurate answer.

And I just want to note that, just like Mrs Winters and just like Styre, Davros is a scientist running a rogue research programme in defiance of the taxpayers. It is unlikely, I admit, that the Kaled or Thal leaders have been democratically elected, but they possibly have more popular legitimacy than Davros's own sense of destiny.

You can get the DVD here and the book here.

It's difficult to call the irish election without having seen where SF transfers go. But looking at first preferences (where we have them) and tallies (where we don't) I think this is a better election for FF than people are saying. I call:
FF 46+1 (bonus for the Ceann Comhairle)
FG 37
SF 37
GP 9
Lab 7
SD 3
SPBP 3
AO 1
Inds 16

This obviously puts FF in best position to lead the next govt. If I were Micheal Martin, I'd fancy a minority administration for a few months and then go to the polls again.

If SF transfers largely go Left rather than all over the place, it's a different matter.