I don't recall seeing any of The Sontaran Experiment first time around in 1975, but it was one of the earlier bits of Old Who that I got back to, in March 2006. I wrote then:

It comes between two excellent stories of Tom Baker's first season, The Ark In Space and Genesis Of The Daleks. Alas, the two episodes in between are not much cop, with the Doctor, Harry and Sarah running around a quarry and falling down holes, in the company of some dishevelled stranded astronauts, a Sontaran and a robot reminiscent of Graeme Garden's computer from the Goodies. The final victory is implausible even by Doctor Who standards of plausibility, and the experimentation scenes gratuitously nasty without adding much to the plot.

After [Ark in Space], The Sontaran Experiment is a bit ordinary. It's refreshing to have more location filming after the claustrophobia of the Ark in Space but I find the plot a bit pointless - why are the Sontarans suddenly interested in torturing? and the battle fleet turns around just because the Doctor tells it to?

Kevin Lindsay is great again - third time in just over a year after The Time Warrior and his unmasked Cho-Je in Planet of the Spiders - and it is sad that he died a month after this story was shown.

This time around, I liked the aesthetic integrity of the location filming, and the fact that the astronauts all have southern hemisphere accents. But otherwise I didn't really like it any more than previously, and I don't have much more to say about it. However, it's only right to note my brother William's theory about What is really Going On:

I'm a big fan of The Sontaran Experiment actually, because it's basically The Texas Chainsaw Massacre but (a) taking advantage of the Doctor Who format to come in after the kids have transgressed and started to be punished, so you skip the boring bits and (b) made a year *before* The Texas Chainsaw Massacre, so it actually has a genuine claim to be the first video nasty. (I think I Spit On Your Grave was around the same time, but I Spit On Your Grave is done from the point of view of the "monster" so it's a different kind of movie).

I also love the fact that Styre's experiments are stupid. Would the Sontarans in war really adopt the tactics of depriving their enemies of water for a month rather than say shooting them? Clearly, what's going on is that Styre is a psycho, is known by the Sontarans to be a psycho, and so has been sent to a planet of *no strategic value* to twiddle his thumbs while something important goes on somewhere else. (He wasn't just killed because he was well-connected -- all clones, of course, have family in high places). The reason why the Doctor is able to get the invasion called off so quickly is because it was never planned in the first place. YOU SEE IT ALL MAKES SENSE.

Having said that, it's not brilliant. But if they'd had the budget to film the novelization it would have been.

Although Wood and Miles say the Sontaran Experiment is the story that took the Sontarans from villains to monsters, I think Styre is a unique creation, taking the slight lasciviousness of Linx and elevating him fully into a creepy sex gnome. It's the pinnacle of the Sontarans as slightly interesting, compellingly gross aliens, in a way that was thrown away by their subsequent classic series appearances and abandoned in their new series transformation from Rumpelstiltskin to rugger bugger. (Having said that, Strax in A Good Man Goes to War is a step back in the right direction of finding things you can do with the Sontarans that you can't do with the Cybermen or Daleks -- an unhealthy fascination with the mechanics of being organic is key to making them interesting).

Fandom is a broad church, and it's good when people find different things to like. I'll just also should out to Glyn Jones, one of the stranded astronauts here but also author of the Hartnell story The Space Museum, and therefore one of the few people to have both written for TV Who and appeared in front of the cameras. (If we include spinoff literature, the list expands a bit, to include John Barrowman, Matthew Waterhouse and Colin Baker.) 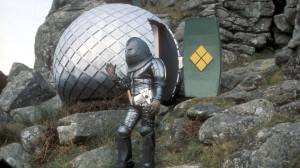 The novelization is also by Ian Marter, who played Harry Sullivan in the televised story; I wrote in my Strange Horizons piece (apologies for some repetition from my Ark in Space post):

Marter's first two Doctor Who books, Doctor Who and the Ark in Space (1977) and Doctor Who and the Sontaran Experiment (1978), were both based on stories broadcast in 1975 in which Marter himself had appeared as Harry, and there's a corresponding emphasis on the character. It's more prevalent in the latter, where the Doctor and friends spoil the plans of the eponymous aliens to invade the Earth.

Marter both added and subtracted from the story as broadcast. He added some simply superb descriptive passages which one really regrets were not realised on-screen. At his best, there are some much longer sections: Harry gets almost an entire chapter to himself exploring the Sontaran spaceship, a passage completely absent from the television story, which had only two episodes as opposed to The Ark in Space's four, so some padding was required. There's also the nightmares inflicted on both Sarah and Harry by the Sontaran experimenter. He also adds graphical nastiness and violence. The fight between the Sontaran and the Doctor is realised in considerable detail.

Basically, if your attention is suddenly held by the prose in one of Marter's novelizations, it's a fair bet that it's something he added. Doctor Who and the Sontaran Experiment makes a below-average DW story into a well-above-average DW novel.

Here and there he encountered other, similar shafts branching off at all angles. Harry ignored these and struggled on towards what he hoped would prove to be the surface. The same warm, sulphurous breeze issued from all the tunnels making the air thick and suffocating, so that Harry’s throat burned and his head throbbed. Whenever he paused for breath, curious distant sounds—like the pounding of machinery—reached his ears.

The novel actually adds quite a lot to the story as shown, including two more sleeping Sontarans and an on-ship robot, plus the Doctor kills off Styre with Scotch whisky which is a bit more grown-up than we were allowed to see on screen! But I also noticed this time that it's one of the thankfully few stories with no female guest cast members at all (Elisabeth Sladen is here as Sarah Jane, of course).

Going back to my theme of the management of public-funded science - we don't actually need to go the whole way with William's suggested analysis to observe that Styre is doing a dodgy and dangerous research project without the full approval of his political masters, who are (rightly) becoming increasingly suspicious of what he is up to - just like Mrs Winters at Thinktank. I wonder if there will be any more stories featuring that scenario this season?

Genesis of the Daleks next; meanwhile you can get the DVD of The Sontaran Experiment here (also here as part of a Sontaran box set), and the novelization here.
Collapse