He did not see or hear her arrive at the door to the cellar where he was working, until she called him by name, gently enough not to alert his comrades above. He reached for his gun at the sight of her but she tutted and shook her head with collegial imperiousness. “I’m Main à plume,” she said, and he believed her. That it was by some technique from the canon, some re-uttered poem in a novel context, that she had gained unseen entrance. He put his rifle down.

This was one of the near misses for the Hugos in 2017, but I was interested to read it anyway as Miéville is always provocative. Here we have an alternate timeline where Paris is still resisting the Nazis in 1950, and the Surrealist artists are united with the Partisans in resistance. I'm afraid it would have meant more to me if I knew more about the artistic connections, which were somewhat above my head. You can get it here.

This was my top unread book acquired in 2017. Next up is The Moomins and the Great Flood, by Tove Jansson. 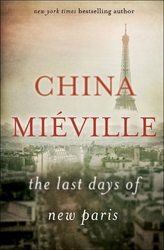