I definitely remember watching The Ark in Space first time around - again, not sure that I caught every episode, but the setting of the space station far in humanity's future was immediately entrancing. When the show returned, this was one of the first DVDs I bought. I wrote then:

Harry is a bit annoying, but it's every bit as good as I thought I remembered from when I was seven (I admit I watched the updated CGI version rather than the one with the original model shots, so the only really wobbly bit was the march of the Wirrn over the hull in the last episode). Of course, Ian Marter's novelisation was even more fun, but there's lots to like here - particularly pleasing are the characterisation of Tom Baker's Doctor (only his second story broadcast, though of course the third to be filmed), the first episode with nobody other than the Doctor and companions, and the banter between minor characters Rogin and Lycett. DVD extras are OK, including an interview with Tom Baker in Wookey Hole filmed while making Revenge of the Cybermen.

I've often remarked in the course of this rewatch that I've revised my view of a story from mediocre to decent (or more rarely vice versa) when watching it in sequence. For the first time, with The Ark in Space, I'm revising my rating from "excellent" to "really superb". In particular, the first episode, establishing the new Team Tardis (particularly the Harry-Doctor relationship, Sarah already being a known quantity) with no other characters seen, is a great stroke - I think the last time we had a new companion treated in anything like this much introductory detail was Zoe.

The rest of the story is good too, with a great deal made of very little physical material - green bubble-wrap and about three sets in total. And Kenton Moore's agonised performance of Noah is excellent. (I had missed on previous watchings, but 'Noah' is his nickname, his real name being 'Lazar', i.e. Lazarus, so in fact a character with two Biblical references.) Slightly let down by the adult Wirrn but they are far from the worst monsters ever (or even this season).

This time around I watched it with the visiting in-laws,and they in their late seventies were as captivated by it as I was aged seven in the mid-seventies. I had forgotten just how claustrophobic the set is made to feel, psychologically reinforced by the rapid spate of deaths in the second episode, and the body horror of the Wirrn (Noah vs his arm being another shout-out to Dr Strangelove). Also, the different parts of the Nerva beacon are distinct enough from each other that we don't get lost - there is a clear correlation between the external model shot and what we see inside. We don't always get that in 1970s TV science fiction. 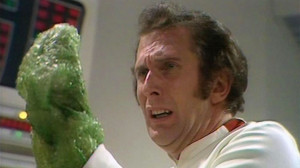 Doctor Who and the Ark in Space was the first of ten novelisations by Ian Marter, who actually played Harry Sullivan on screen (and still has the second highest tally of novelisations after Terrance Dicks, despite having died in 1986). I did a big article about Marter for Strange Horizons a while ago; here are the relevant bits:

Marter's first two Doctor Who books, Doctor Who and the Ark in Space (1977) and Doctor Who and the Sontaran Experiment (1978), were both based on stories broadcast in 1975 in which Marter himself had appeared as Harry, and there's a corresponding emphasis on the character. It is weaker in the former, a story of alien insects infiltrating a far-future space station where humanity lies dormant, waiting for the earth to become inhabitable again, although Harry very much provides the viewpoint in the first chapter as we are introduced to the Doctor, Sarah, and the futuristic setting.

Marter both added and subtracted from the story as broadcast. He removed, somewhat surprisingly, most of the humorous lines of dialog, such as the Doctor's line from The Ark in Space: "Well, my doctorate is purely honorary, and Harry here is only qualified to work on sailors." It is, of course, a joke on Harry's character, but perhaps Marter just felt the line didn't work as well on the page as it does on the screen. It's also a bit surprising that the unusual link between the two television stories—the Doctor and his companions travel to Earth via transmat beam—was dropped in favour of the more standard journey in the Doctor's TARDIS.

He added, however, some simply superb descriptive passages which one really regrets were not realised on-screen. Sometimes it's just little things, like the Doctor opening a door on the space station by thinking at it. At his best, there are some much longer sections: [eg] Sarah's journey through the ventilation duct, through the mass of Wirrrn—another thing added by Marter is an extra "r" in the name of the monster insects. He also adds graphical nastiness and violence. One character's head explodes, revealing the Wirrrn within. Another's body is "burnt to a colourless crystal."

Basically, if your attention is suddenly held by the prose in one of Marter's novelizations, it's a fair bet that it's something he added. Doctor Who and the Ark in Space is a really good read, to the point where Andrew Wrixon at the Doctor Who Ratings Guide blames Marter for making him unable to enjoy the original television version as much as he does the novel.

Coming back to it now, Marter's shift in tone from Dicks is even more remarkable; this is a gruesome gritty story, where future humanity has impoverished itself spiritually through unimaginative specialisation, failing to question the flawed political leadership of Noah until the disruptive Tardis crew stimulates them to do so. But the book somewhat deprecates the considerable agency of the women characters in the original - it's very interesting that the High Minister of Earth is a woman (as Harry says, in the year that Margaret Thatcher was elected Leader of the Opposition, "Fancy a member of the fair sex being top of the totem pole?")  played by Gladys Spencer, who at the age of 80 must have been one of the oldest actors to appear in Doctor Who to that date (even if we only hear her voice).

This is a good story, but only the second best of this season. You can get the DVD here and the book here (a new edition with a foreword by Steven Moffat).

Next books
The Critique of Pure Reason, by Immanuel Kant
Arc of the Dream, by A. A. Attanasio
Collapse