It struck me as the year turned that this year’s Doctor Who series, being the twelfth of New Who, occupies in a sense the same space as the first series of Old Who featuring Tom Baker, which is also the first series of Doctor Who that I remember really making an effort to watch as it was broadcast (I was seven). So, time to go back, and also revisit my own previous takes.

I think I only caught the last episode of Robot first time around, in 1975, and was puzzled as to why the Doctor was not the grey-haired smartly dressed chap I had seen before. So when I watched in 2007, it was the first time for the first three episodes, though I had of course read the novelisation and the bits from The Making of Doctor Who that looked at the scriptwriting process. I wrote:

Robot was the first of Tom Baker's stories as the Fourth Doctor, its first episode shown at the end of December 1974. I should really have watched it before getting the first set of Sarah Jane Smith audios, as they turn out to be a sort of sequel. It is particularly remarkable (even now, when Pertwee's Doctor is a distant memory) for Baker's jarring, eccentric performance in the title role. In the very first episode, after the hilarious costume change scene, he mimes the sinking of the Titanic while standing in a jeep. This is why Baker was and remains my favourite Doctor - the sense that he is not only a hero, but an alien hero, which only Hartnell and Ecclestone really have come close to. He turns what is basically a standard Pertwee/UNIT story into a real feast of entertainment. Everyone else is good, including the fascist scientists. (Shame about the tank and the final dodgy CSO of the growing and shrinking robot, but you can't have everything.)

A few years later, in 2010, I reached it in my rewatch of Old Who from the beginning, and wrote:

By a fortunate coincidence, I was watching Robot at the same time as reading Ayn Rand's Atlas Shrugged, where the gifted technical folks, feeling that the world does not value them enough, withdraw from it until everyone else has starved to death. The story clearly has roots in Mrs Thatcher and fascism as well as King Kong and Frankenstein; there is a brilliant scene with Timothy Craven playing a character called Short (his only lines in the entire story) who is a real nerds-will-rule-the-world type.

The main delight of course is watching Tom Baker, fresh and new, but walking into the part as if it was what he was meant to do all his life (which perhaps it was); his line about the Titanic, his experiments with costume, his tricks with the scarf, his combination of gritty moral determination with bonkers humour, all make me wish I had seen all of this first time round rather than just the fourth episode.

Watching again now, especially with The Woman Who Fell To Earth still fairly fresh in my memory, I see a bit more of what the production team is trying to do - a debut story for a new Doctor in the comfortable environment of a UNIT adventure, simultaneously reassuring the audience that this is still they show they know and love but also tickling them to keep watching for new excitement with a new lead. Sarah Jane Smith and the Brigadier were the only two well-established companions to survive a change of Doctor in Old Who (in New Who, there's Rose, Clara and to an extent Captain Jack and River Song). Both of them get some decent exchanges with the new Doctor, the best line being surely "Naturally, I mean, the rest were all foreigners", though Sarah's "Brigadier, you're a swinger" is a close competitor. 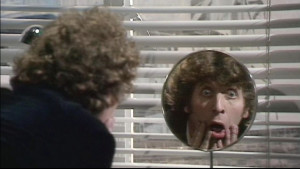 It does have its flaws. Baker mugs for the camera rather a lot in the first episode before settling into it (there's a bit of that in The Sontaran Experiment as well). The not-so-special effects have been mentioned. I also found Professor Kettlewell's arc rather unconvincing (Dicks tries harder to explain it in the book, but does not really succeed; the same is true to a lesser extent of Jellicoe). However I think you could safely recommend it as a jumping-off point for newbies wanting to watch Old Who, just as it was for me 35 years ago.

I revisited the novelisation in 2008, and wrote:

Oddly enough, Dicks is not especially good at making his own stories transition happily to the printed page. There are some good bits added/changed here, especially the characterisation of the new Doctor, but in general it is competent rather than exciting.

One point that struck me on reading this (rather than on watching the TV original) was the similarity between the Robot and the Hangman in Roger Zelazny's Hugo/Nebula winning novella, "Home is the Hangman". The Who story came first, but I would be surprised to learn that Zelazny had had a chance to see it; both he and Dicks were, of course, drawing from many other sources going back at least as far as Mary Shelley.

Quite by coincidence, I reread “Home is the Hangman” very recently. The similarities with Robot are striking, but I think must be pure chance; Zelazny’s story was published only a few months after Robot was broadcast, and he is unlikely to have seen it in America. The other partial inspiration which I also recently revisited is, of course, Dr Strangelove. And of course there’s King Kong.

This was the first novelisation of a Fourth Doctor story, and came out only a couple of months after the original broadcast. It is rather clearly written for younger readers than most novelisations; Terrance Dicks perhaps still finding his range. The second paragraph of the third chapter of the book is:

The Thinktank had started life as a manor house, built by a wealthy merchant in the spacious days of the nineteenth century. Now, in the twentieth, it was far too expensive for any private owner to keep up. Like many other big houses, it had been taken over by the Government. Its size and relative isolation made it an ideal choice for the newly-founded Thinktank. Now the sprawling wings of the main building, and the many stables, barns, outhouses, potting sheds, and greenhouses, had all been converted into ultra-modern laboratories. Mercifully, the conversion had been carried out unobtrusively, and, except for the addition of a guarded perimeter fence, the outside of the fine old building was unchanged. The Director’s office, once the Squire’s study, was also very much the same, except for the addition of a few filing cabinets.

I remember, when first reading the book aged nine or so, being rather excited by the concept of a thinktank; now that I have actually worked for a couple of them and deal with them every day, the glamour has worn off just a little!

But actually, having watched the whole of Season 12, it strikes me just how political the stories are. Some are more obviously so than others; here we have the question of accountability for state-funded research which has potentially lethal consequences, and also the dangers of a fanatical group of scientists setting up a state-within-a-state, plus a shout out to the dangers of nuclear war. Put like that, Robot is in part a dress rehearsal for the greatest of this season’s stories.

You can get the DVD here and the book here.
Collapse