(The speaker is Rory.)
This is one of the IDW Eleventh Doctor comics, and actually appears to be the only one I have. The Doctor, Amy and Rory wind up in Casablanca during the second world war, and as well as wandering Zelig-like in and out of the background of the famous film, they become caught up in a Silurian plot to take over the world. It's a neat trick to combine both Who lore and a well-known story from outside the Whoniverse, and I felt that Fialkov's narrative worked well. I wasn't always so happy with Smith's art, which inclines a bit to the abstract; I was really tempted to buy this by Mark Buckingham's lovely cover, with its homage to the film's famous poster. You can get it here.

This was my top unread comic. Next on that pile is Peanuts: A Tribute to Charles M. Schulz, acquired in Santa Rosa just over a year ago. 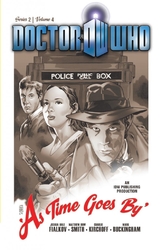