Londinium lies between six and eight metres below London. In Naples, you can take tours to ‘Napoli Sotterranea’, underground Naples. You can climb down steps under a church, and be in the Roman streets. Or wander through the Greek city, older still, which was once the new city, the ‘nea polis’. You cannot ‘be’ in Londinium, though you can, if you are persistent, seek it out and glimpse it in the crypt of a church, in the cellar of a shop, in an underground car park, behind a locked door in an office basement. If Londinium is the city’s dark ancestral place, its unconscious, then it is, for the most part, occluded. It is in the City’s nature to prefer the bright, sunlit, angular surface of things, the hard edges of its supermodern architecture with its false promise of prosperity. Why would you want to go down there, to the dank, dark places of the imagination? To the past? The katabasis — the Greeks’ ‘going-down’, the descent to the Underworld, is a dangerous journey. You might not return with what you set out to find.

I am Irish, and was reflecting the other day with a friend born in Iran that the Romans had basically conquered everywhere between our two countries at one time or another. (Roman Armenia of course actually did overlap with present day Iran.) Now of course I live in a former Roman province, with a Gallo-Roman tumulus less than a mile from my home and ten more in the immediate vicinity. I have a big book on Roman remains in Belgium on the unread shelf. But I got seduced by this lovely book by Guardian journalist Charlotte Higgins, going around Britain and looking for the Roman stuff, exploring some places that I know (London, Bath, Silchester where I spent a summer afternoon long ago, Wroxeter) and others that I don't know at all (Roman Scotland, Kent, Essex). She has a good eye for character, both among the past figures who she writes about and the personalities of the present day (the patient boyfriend a little-seen but much-felt presence); and also for landscape - like her, I read Hunter Davis' A Walk Along the Wall many years ago, but she has updated it with reflections on the role of tourism in the survival of the otherwise failing rural economy. I came out of this book with a much longer list of things to see in future.

I did wish that the many photographs had had adjacent descriptions, rather than marooning them all on a separate page.

There are some very moving sections. The affair of Arthur's O'on, a Roman temple which gave its name to Stenhousemuir, almost equidistant between Glasgow and Edinburgh, and destroyed in 1743, is a sad commentary on the different valuation of heritage in the past. The story of Tessa Verney, and her better known husband Mortimer Wheeler, is also not a happy one. but I'll leave you with her lovely note on one of the Vindolanda tablets:

You can see some of the Vindolanda tablets in the Roman Britain gallery of the British Museum, and they look deeply unimpressive. They are thin, small, brownish rectangles covered with thin, small, brownish writing. And yet, craning my neck at an uncomfortable angle to try to read the indistinct strokes, I found myself with a catch in my throat when I came face to face, for the first time, with a tablet whose text I knew already:

Claudia Severa to her Lepidina greetings. On 11 September, sister, for the day of the celebration of my birthday, I give you a warm invitation to make sure that you come to us, to make the day more enjoyable for me by your arrival, if you are present (?). Give my greetings to your Cerialis. My Aelius and my little son send him (?) their greetings.
I shall expect you, sister. Farewell, sister, my dearest soul, as I hope to prosper, and hail.

Sulpicia Lepidina was the wife of Flavius Cerialis, the camp commandant. Claudia Severa was the wife of Brocchus, he of the hunting nets. The letter is written in two hands. The body of the note is in a clear, competent script that has been identified on other tablets - perhaps that of a scribe. The sign-off - warm, personal, urgent - in another hand. It is probably, according to the papyrologists, Severa's own. If it is, it means these are the first words to have survived, from anywhere in the empire, in a Roman woman's own handwriting. 'Sperabo te soror, vale soror, anima mea, ita valeam karissima et have,' reads the Latin. The words 'anima mea karissima', my dearest soul, may have been a bland formula ('lots of love'?), but I none the less felt ambushed by the affection and sweetness in them. The fragment contained atavistic magic that scepticism could not entirely blot out. The years seemed to collapse as I read it, picking out the faint, spidery Latin on the dull wood. I read the words over and over again, and thought of the lost life of the woman who wrote them. 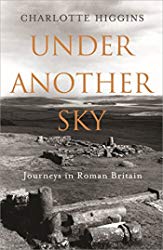