Second paragraph of third chapter:Guido Eekhaut is a well-known figure in the Belgian sf scene, who has also written a couple of dozen books, most of them speculative fiction but also some thrillers. This particular book was commissioned a few years back by Belgian railways as part of a set of six novels for commuters. (What a good idea!!!) It's set inand around Leuven, the city where we both live (well, I'm a bit outside it), and concerns an occult police detective (named Solomon) with a newly acquired sidekick (Lisa Noman, who is a woman) investigating the demonic deaths of a couple of senior university officials on top of the university library. There's lots of fun exploration of the city, both parts I know and parts I don't, and some interesting speculation on how magic actually works. I did feel the ending was a little rushed, and wondered if it might have been more satisfactory without the rather severe length restriction imposed by the sponsor. You can get it here.

This was the shortest of the unread books acquired in 2013 on my pile. Next up is Strategic Europe, by Jan Techau. (If I can find it.) 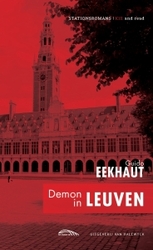