When I was eight years old, Orma hired me a dragon tutor, a young female called Zeyd. My father had objected strenuously. He despised dragons, despite the fact that he was the Crown's expert on the treaty and had even defended saarantrai in court.

I was moved to get this after hugely enjoying Hartman's Tess of the Road, a finalist for last year's Lodestar Award. Seraphina didn't blow me away quite as firmly, but I still thought it was very good - a YA novel about a girl growing up in a kingdom which has reached an uneasy peace with its dragon neighbours, herself concealing the secret that she is actually half dragon and half human. There's a lot of good stuff here about being othered, body dysmorphia, racism and prejudice, and loyalties split between family and state; and music as a counterpoint to combat. I have the second book of the sequence on my shelves too. You can get it here. 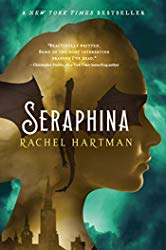