The first thing I committed to memory wasn't the lines of a play, it was the names of the Busby Babes. There was a drawer in my mum and dad's bedroom and whenever I got the chance I'd go rooting. I'd find sets of false teeth, ties, photos, watches, United programmes, leather lighters from the '70s, all sorts. It was fascinating. Boredom was our ally back then — we had nothing else to do so exploring the house was an inevitability.

This was the last book I finished in 2019, and the best of the Doctor Who biographies and autobiographies that I read last year (the others were by or about John Leeson, Mary Tamm (v1, v2), Robert Holmes, Matthew Waterhouse, Peter Davison and Andrew Cartmel). There's actually not all that much in it about Eccleston's performance as the Ninth Doctor. He devotes a short chapter to it, praising Russell T. Davies, Steven Moffatt, Euros Lyn and Billie Piper, and I guess letting his silence speak for the rest. He bookends that chapter with the experience of watching his own stories with his own young children, fifteen years on, which I found a very effective device to tell what the show now means to him. I'm looking forward to seeing him at Gallfrey One next month.

The guts of the book are about Eccleston's own somewhat tortured soul, and its roots in the life experience of his father, a factory worker whose talents were suffocated by the class-ridden social structures of mid-twentieth century Salford. He goes into moving detail about his own experiences of mental illness and particularly anorexia; it's tough but fascinating to read. He is disarmingly frank about his own failures and successes as an actor; always of course in the context of a profession which is rigged in favour of thin people with posh accents - he forced himself to become thin but could never be posh. Another moving passage describes his relationship with Trevor Hicks, who he portrayed in Hillsborough; the two became friends to the point that Eccleston was Hicks' best man at his wedding. But the most gut-wrenching sections are the passages about his father's gradual descent into dementia, and the consequent slow death of normal family life. The timing of the various incidents is a bit confusing - few dates are given, and we jump around quite a lot in the thirty years of his career; but reading between the lines it looks like his father's sharpest decline coincided with the 2004-05 filming of Doctor Who.

This is not a fluffy book, but it's a very thoughtful one, angry in places and always passionate. You can get it here. 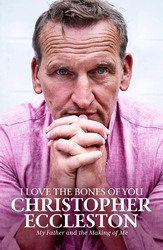